Before I get into details about the stamps of these issues, I wanted to show you some of the items that have solidified my interest in Nigerian philately. One of the nice things about collecting a country like Nigeria is that  you can collect at a much higher level, for a given outlay of cash, than you can with a more popular country like Great Britain and the USA.
One thing that you won't often see are full sheets. Unlike other populous countries where full sheets for modern issues are still used for postage, full sheets from Nigeria are quite scarce. Part of the reason is that for many sets the print quantity was under 1 million stamps. Given that most sheets are 60 stamps, this means that in many cases there were fewer than 17,000 sheets printed.
The sheets below are especially hard to find. In four years of concentrated collecting, I have only ever come across a handful of these. 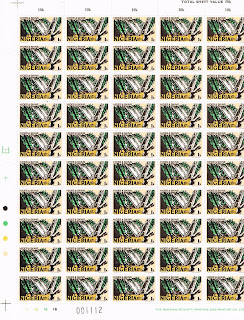 The 1k Hides and Skins, plate 1B sheet printed in photogravure, from the first printing made in 1973. 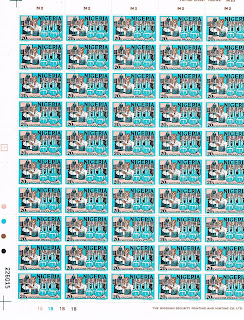 The 20k Vaccine Production, printed in lithography, from plate 1B. This is one of the last printings of this stamp, as evidence by the colour of the liquid in the flasks, which is blue, instead of black, or grey-violet. 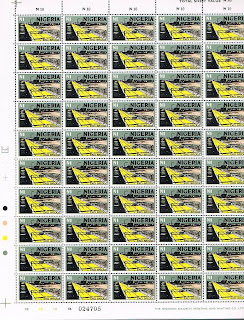 The 1N Eko Bridge from the first photogravure printing made in 1973. This stamp showed the traffic driving on the left side of the road, which is how Nigerians drove until they switched to right-side driving in 1972. 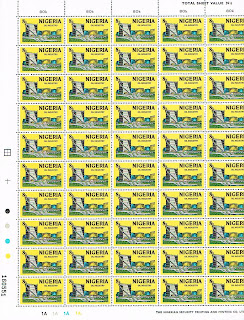 The 8k Oil Industry from plate 1A. This again was one of the last printings, made by lithography, as evidenced by the watermarked paper and the bright yellow background. 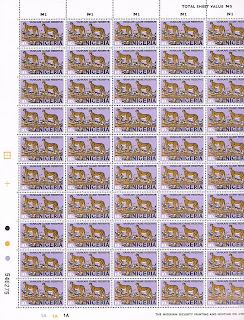 The 10k Yankari Game Reserve - a lithographed printing from the mid 70's, from plate 1A. 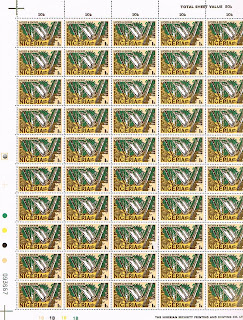 A later, lithographed printing of the 1k Hides and Skins from plate 1B on watermarked paper. 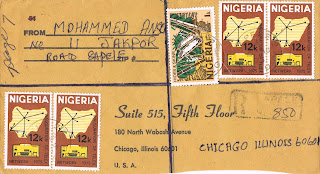 A 1975 registered letter to the Rosicrucian order in Chicago, IL. The Rosicrucian order was a religious organization that had members from all over Africa. This letter likely contained money to pay a membership fee, because it was registered. There is a 2k stamp on the back, making the total postage 51k. 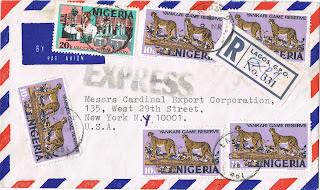 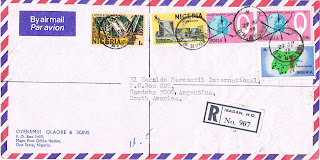 A 1978 registered airmail cover to Argentina. The postage rate to Argentina was 30k, and the registration fee was 20k. This shows the use of a variety of different stamps to pay the rate. This is a fairly common phenomenon to the collecting of Nigerian postal history - the use of large multiples of cheaper stamps to pay the rates, as opposed to just single high values. Another aspect that will surprise many westerners is the sheer volume of different destinations that can be found. How many covers to Argentina do you typically see?

A 1973 airmail cover to the USA, franked with 1973 printings of the 1k and 5k values. The 30k airmail rate to the USA has been paid with two pairs of 5k Cattle Ranching stamps, and 10 copies of the 1k. 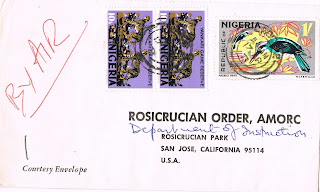 Here is another interesting aspect to the postal history of Nigeria: dual currencies. In 1972 a plan was adopted to move away from Sterling currency to the new currency of the Naira and kobo. For a time after the currency change, the postal authorities accepted sterling stamps at their nearest equivalent face value. The above 1/- stamp has been used as a third 10k stamp to pay the 30k airmail rate to the USA. Again, this was sent to the Rosicrucian order.

Another dual currency cover to the US, but in addition, showing a cut-out from an air letter, charred at the edges and used as a stamp. Nigeria is the first country I have collected, where I have run into this practice. the 19d of sterling stamps have been used to pay the remaining 15k of postage required to the USA. You will note that the 5k on this cover is a different group of colours from the one on the cover above. This stamp has darker green fields, a deeper blue sky, brown cattle and the the herdsman is black instead of dark brown. 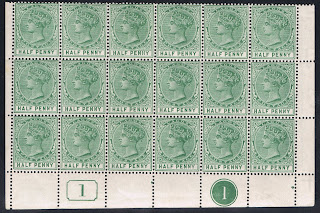 A block of 15 of the halfpenny green showing the plate number in the lower selvedge. This I believe, is a half-sheet, from the left side of the pane. I have not yet seen a full sheet of Queen Victoria stamps to be able to verify the sheet layout, although I do know that the Edward VII issues came in sheets of 60 (6x10). So this may in fact, be a quarter sheet. 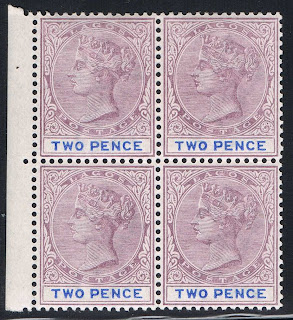 A block of 4 of the 2d lilac and ultramarine. This stamp was first issued in 1887, and the words of value were printed in a dull blue, which later became greenish blue, and eventually the ultramarine that you see here. This printing is likely from after 1897. 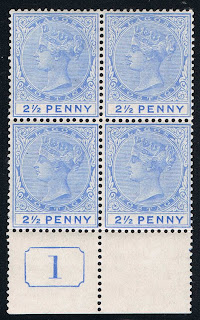 A lower sheet margin block of 4 of the 2.5d ultramarine. This value was first issued in 1891. 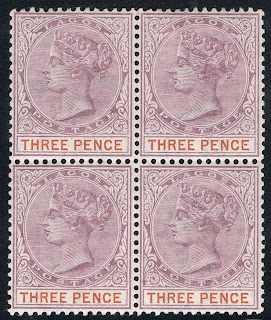 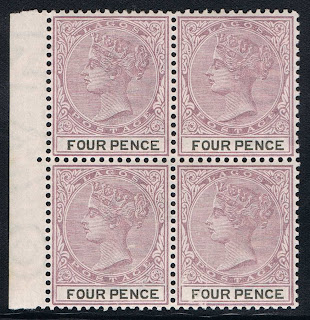 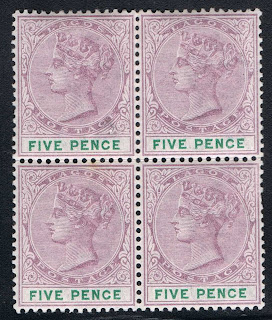 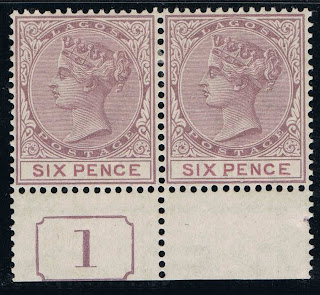 Lower sheet margin pair of the 6d lilac and claret. This was the earliest printing of the 6d bi-coloured stamp, which replaced the 6d olive bistre in 1887. 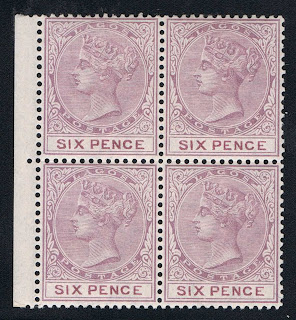 A left sheet margin block of 4 of the 6d lilac and purple. This was a later printing of this value made between about 1896 and 1900. 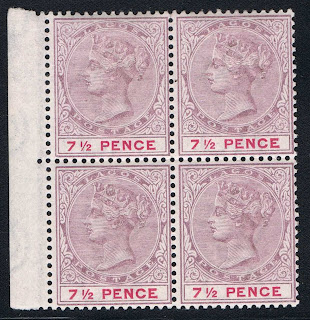 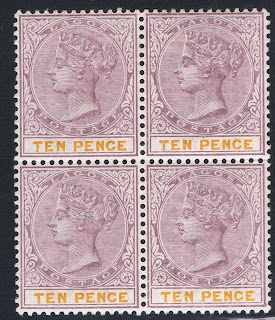 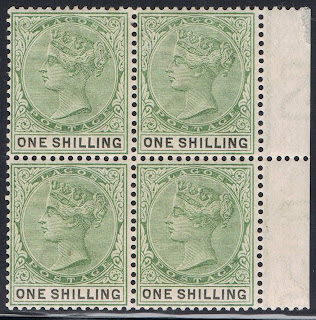 A right hand sheet margin block of 4 of the 1/- yellow green and black. This was the early printing of this value made before 1897. The colour is doubly fugitive, which means that it will run if exposed to moisture. The colour will first turn bluish, like the block below, and then will become bright yellow. Thus nicely used examples in original colours are very desirable, due to their scarcity. 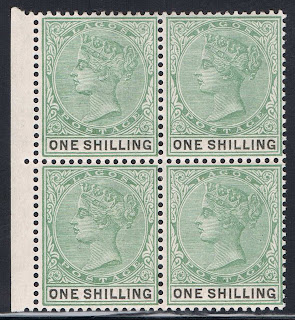 The 1/- blue green and black in a left sheet margin block of 4. This printing came after the above one after 1897. Most used examples in my collection are dated after 1898. Like the stamp above, the ink on this stamp was doubly fugitive. 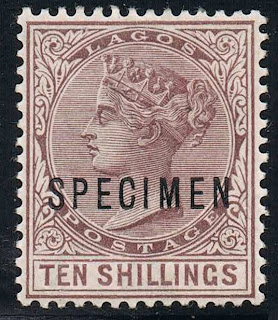 The 10/- violet brown from 1886. This is one of Nigeria's rarest stamps, with only 400 printed. My ambition is to obtain one mint, and one used example without the specimen overprint. The purpose of the overprint was to enable foreign postal agencies to know what valid Lagos stamps were supposed to look like.