I am long overdue for another post. Gosh how time flies! It is hard for me to believe that nearly two months has flown by since I wrote my last post. I have, as I write now selected all the covers that I wish to include in my exhibit at the upcoming West Africa Study Circle meeting in London. I have selected 207 covers from Lagos, all the way through a strong showing of the 1973-1986 definitive issue. This selection  includes nearly all of the covers that I have presented in previous posts, plus all the best covers from my collection. In selecting them I have focused on exotic destinations, and multi-stamp frankings, as well as famous recipients and postage due covers.
The covers that are the subject of this post, are a small batch that I have acquired over the past few months from various sources and with one exception, all are from Southern Nigeria. However, the first cover is from Nigeria, featuring the common 1d stamp from the 1921-1936 Script Watermark Issue: 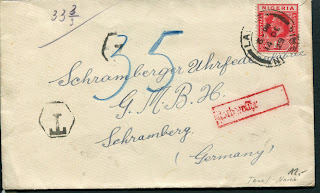 The cover is an underpaid  first class cover to Germany, franked with a single 1d carmine die 2, which has been tied by a strike of Proud type D53 or D54 Lagos hand-stamp dated October 14, 1929. The postage was supposed to be 3d, so a Proud type UP8 taxation handstamp was applied to indicate the shortpayment. The deficiency when doubled, translates into 35 pfenings, which has been indicated on the front of the cover in blue pencil.
The next cover is a double weight cover from the German West African Trading Co. in Calabar, to Lome in Togo: 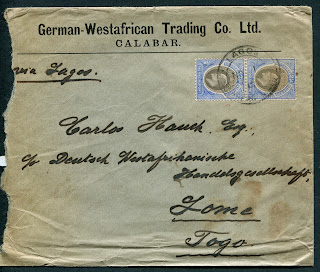 The cover has been franked with a pair of the 2.5d King Edward VII stamps, which have been tied by a strike of either Proud type D30, D31 or D32 Lagos CDS handstamp. The cover left Lagos, and arrived in Porto Novo, Dahomey on November 7, as indicated by the receiving backstamp. It then went on to Agoue, Dahomey on November 9. There was no backstamp to indicate when it arrived in Lome.
The next cover originates from the same organization, but this time has been sent from Calabar, and instead of being double weight, it is a single weight letter rate: 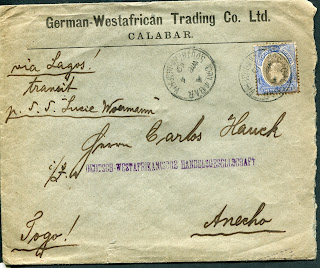 The front of this cover, like the one above indicates that the cover was to be routed via Lagos, although this one specifies that it was to be carried on a steamship, although I cannot read the second name. The cover is addressed to Anecho, Togo, and the stamp is tied by a clear strike of Proud type D15 Calabar CDS. 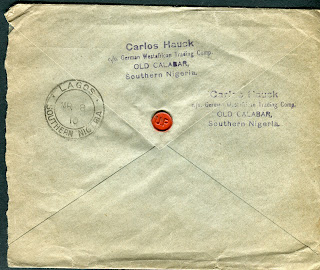 The back of the envelope shows that while there is a Lagos transit backstamp, there is no receiving handstamp for Anecho, Togo.
The fourth cover in the lot is one of my favourites. It is a registered single weight cover sent from Lagos on April 28, 1907 to Brussels, Belgium: 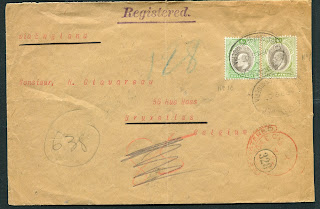 The cover is franked with single copies of the 4d and 1/2d King Edward VII keyplate definitives, printed on chalk surfaced paper in the first head plate die. These stamps together pay 2d registration, plus 2.5d postage. They are ties by strikes of Proud type R9, Lagos registered oval handstamp. There is a red registration transit stamp dated May 19, 1907 when the cover arrived in London. 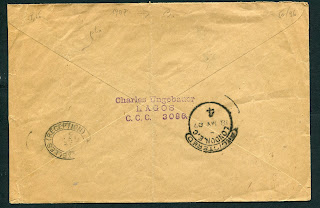 The back of this cover shows the transit handstamp applied in London on May 18, 1907, when the cover left the U.K. To the left of this, is a small oval receiving handstamp applied in Brussels, but unfortunately the date is missing.
The next cover illustrates nicely how the stamps of Lagos continued to be used after amalgamation with Southern Nigeria in 1906. This cover is also a single weight registered cover, sent from Lagos on August 26, 1907 to Brussels, Belgium: 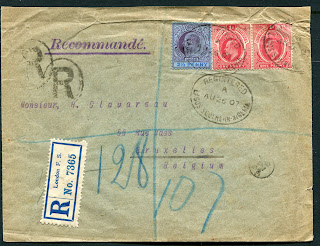 The cover is franked with a single 2.5d Lagos King Edward VII keyplate, and a pair of the 1d carmine King Edward VII keyplate definitives printed from the die A headplate. It should be noted that this was a very early use of the 1d stamps, which were issued two weeks earlier on August 12, 1907. The stamps are tied with clear strikes of Proud type R9 Lagos oval registered handstamps.  A registration label has been affixed at the London Foreign Sorting Office, and two strikes of the Proud type R5 registration marking appear in the upper left corner. 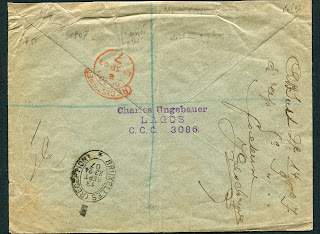 The back of the above cover shows that it reached London on September 13, 1907 and was despatched on the same day, arriving in Brussels late in the evening.
The next cover was a single weight envelope from the same correspondence as the second and third covers above, sent from Calabar to Lome, Togo on August 26, 1910. 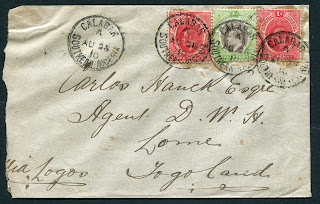 The postage was paid with a 1/2d bicoloured Edward VII keyplate, printed on chalk surfaced paper (a late use, as the 1/2d green was already in use), and two 1d carmine keyplates printed from headplate die B. All are tied with Proud type D15 Calabar CDS. 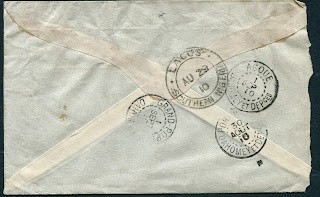 The back of the cover shows the transit backstamps quite nicely, with the cover arriving in Lagos on August 29, Porto Novo, Dahomey on August 30, and both Grand Port, Dahomey and Agoue, Dahomey on September 1, 1910.


The next cover is a single weight registered cover sent from Lagos, on November 29, 1909 to Old Calabar: 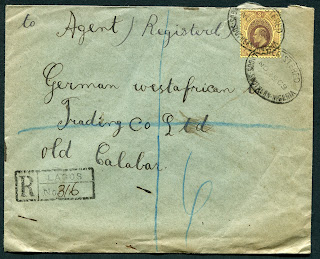 This cover is franked with a single copy of the 3d brown on lemon, King Edward VII keyplate definitive, which was issued just a few months earlier in July 1909. It pays 2d registration, plus 1d inland postage. The stamp is tied with clear strikes of Proud type R9 Lagos oval registered handstamp. Although the back is not shown, there is a similar Proud type R9 oval registered handstamp for Calabar, which shows that the cover arrived on December 8, 1909. 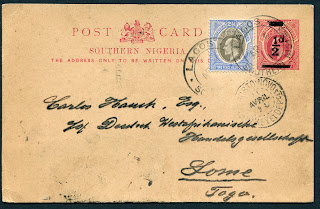 The next item is a scarce example of a commercial use of the surcharged postcard for Southern Nigeria, which is part of the same German West Africa Trading Company correspondence as covers 2, 3, 6 and 7 above. It was sent from Lagos to Lome, Togo and has been uprated by affixing a 2.5d bicoloured Edward VII keyplate, making 3d total postage. I believe that this card may be registered, as the rate for a standard postcard overseas was 1d. However, there are no registration markings on the card. It left Lagos on April 5, 1910 and arrived in Porto Novo, Dahomey on April 11.
The next cover is a single weight surface cover to the U.K, carried aboard the S.S Tarquah, sent on October 9, 1902 from Bonny River: 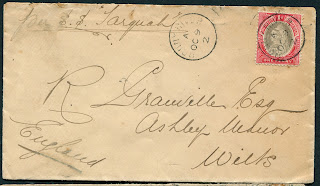 The cover is franked with a single carmine and sepia 1d Queen Victoria keyplate definitive, tied by a single strike of Proud type D2 CDS. The S.S. Tarquah was a commercial ocean liner that was built by Stephen and Sons Ltd. in Glasgow in 1902, so this cover was sent in its first year of service. The ship was sunk on July 7, 1917 by a German U-boat. The back of the cover shows a Chippenham receiving handstamp dated October 28, 1902.
The next cover is a single weight cover to the Funk and Wagnalls Publishing Company in New York. It was sent on March 15, 1908 from Forcados River 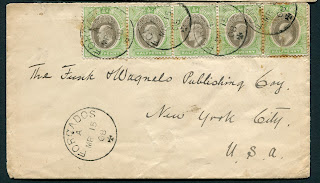 The postage has been paid with a strip of 5 1/2d bicoloured Edward VII keyplates printed on unsurfaced paper, and are tied by strikes of Proud type D4 Forcados CDS.
The last item is another scarce commercially used example of the 1/2d surcharged postcard from Southern Nigeria, sent from Lagos to Halberstadt, Germany, on April 8, 1908: 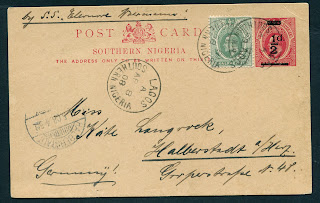 The card has been uprated to 1d by affixing a copy of the 1/2d green Edward VII keyplate definitive, printed from headplate die B. The stamps are tied with clear strikes of the Proud type D24 Lagos CDS