Today's post brings us to the end of the second crown-CC definitive issue of Lagos, with the 6d green and the 1/- orange. According to Ince, there was only one printing of the 1/- orange, which was dispatched on November 26, 1879. This consisted of 96 sheets of 60 stamps, totaling a mere 5,760 stamps - an absolutely minuscule printing, making it one of the scarcest stamps of Nigeria. Despite there being only one printing, all of which were line perforated, it would appear that more than one press run may have been required to fill the requisition, as I have found at least two shades of orange on this stamp.

However, there were three printings of the 6d green, all of which were released prior to 1879, according to Ince:

In examining the quantities printed, one would expect that the last printing should be the most common. The date of this printing is after De La Rue acquired the new comb perforator, but all the printings of other values that were included with this release, are line perforated. However, I have examined three used examples, all of which are cancelled with the barred oval killer, that are clearly comb perforated. These must have come from this last printing. One plausible explanation for this lack of consistency in the perforations of this issue release is that both the line and comb machines were in use, with the comb perforator being used to perforate the sheets of the 6d, and the line machines being employed to perforate the sheets of the other values. This would also appear to be the explanation as to why the only printing of the 1/- is line perforated, when most all the other values by this time were comb perforated.
Fortunately the first two printings are fairly easily separated, both by shade, and the cancellations on used examples. I will now discuss the identification of these three printings, with scans to illustrate the differences.
First Printing - Dispatched On May 9, 1876
This first printing is identified primarily by the shade, which is a milky bluish green. The colour of the head plate and the duty plate match perfectly. The stamps are all line perforated. All used examples that I have seen are cancelled with the Lagos barred diamond grid cancel.
I have one unused example in my stock, that has no gum: 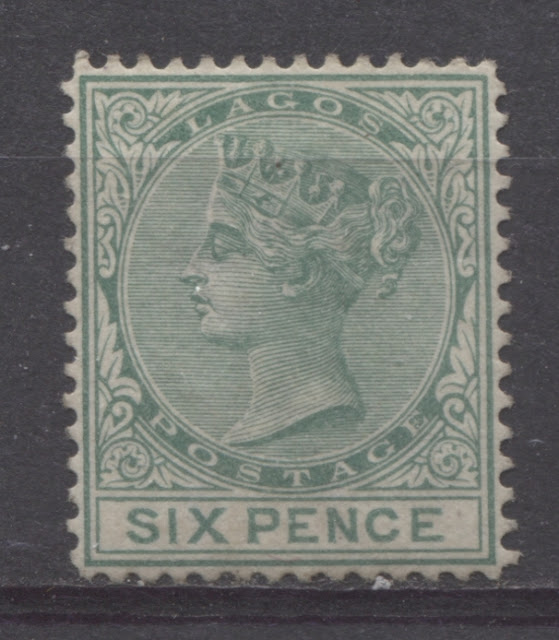 The green has a distinct bluish undertone, while at the same time, being a bit milky. 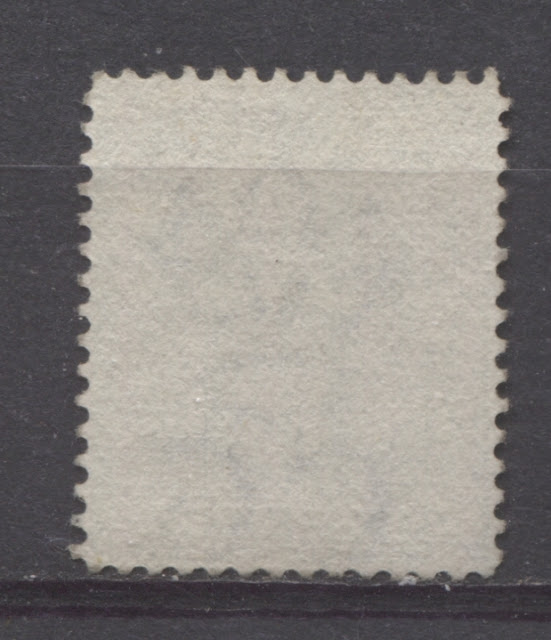 The paper is smooth, with no obvious mesh. The watermark is also not clearly visible. This is consistent with the paper used on the other stamps that were printed on this date.
Here are two used examples: 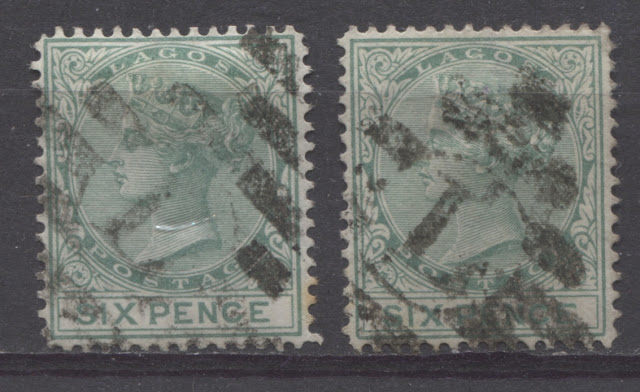 Notice that the colour of both stamps above is bluish and milky. Both are cancelled with the Lagos diamond barred grid cancel. 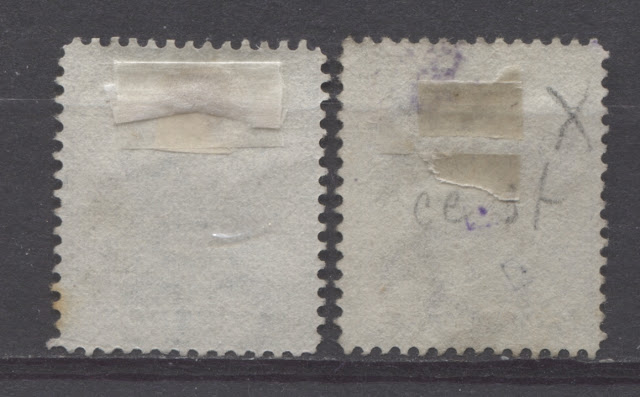 Again, the paper is smooth, with no clear mesh, and the watermark is also not clearly visible without the use of watermark fluid.
Second Printing - Dispatched On June 12, 1877
This printing was also line perforated, only this time, all of the used examples that I have seen are either cancelled with the barred oval killer, or a CDS. The key distinguishing characteristic, once again is the shade. It is a clear, deep, bright green - without either the bluish tone, or the milkiness of the first printing. Again, there is no difference between the colour of the head plate, or the colour of the duty plate. All of the mint examples in my stock, with the exception of the one mint stamp above from the first printing, are from the second printing.
Here are two mint examples from stock: 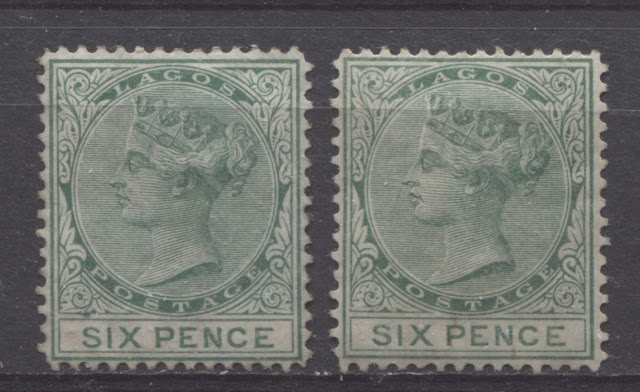 The colour of these is clearly a deep green that is neither bluish, nor yellowish, being an almost perfect balance of the two hues. 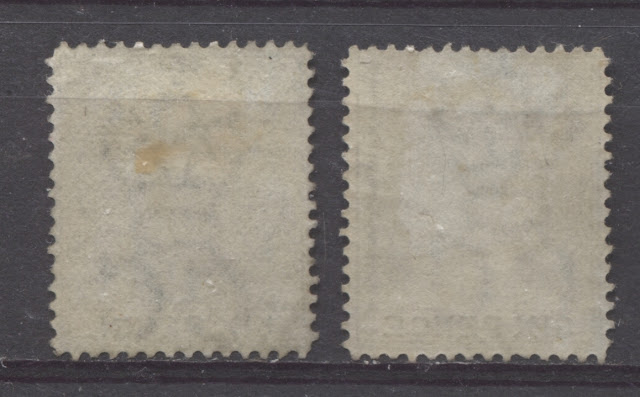 Looking at the back, we see two types of paper. The one on the left shows very feint, vertical mesh, with good visibility of the watermark. The second is the usual smooth paper that shows no obvious mesh. Both stamps have the thin, colourless gum that is commonly found on the crown-CC stamps of this period. This is not inconsistent with the papers that we find on the other values from this period, with some appearing to exist on only one type, while others seem to exist on both types.
Now, let's take a look at two used examples: 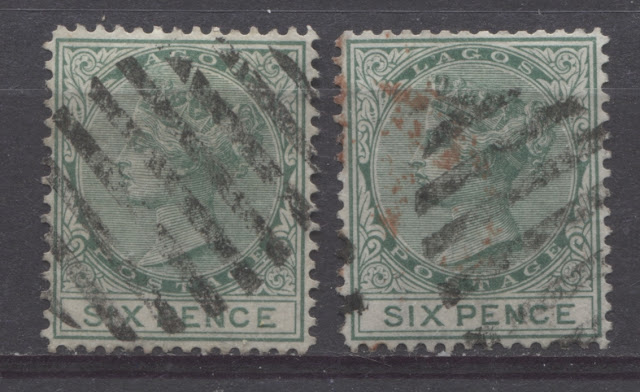 You will notice that the colour is the exact same deep, bright green as the mint stamps. Also note how the two stamps are clearly line perforated, and how they are both cancelled with the barred oval grid cancel, which replaced the Lagos diamond barred grid. 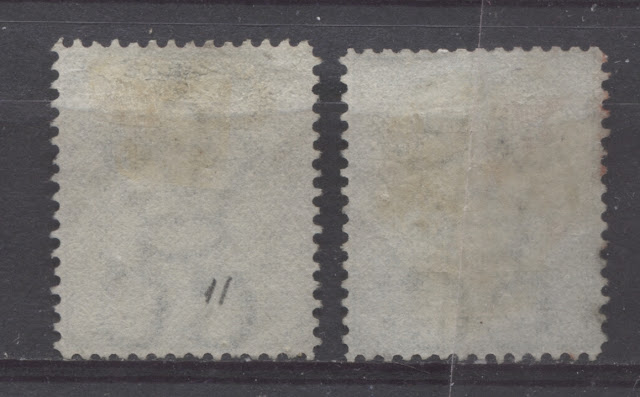 Looking at the backs, we see the same variation in the papers as the mint stamps. The stamp on the left shows clear vertical mesh, while the one on the right does not. On both stamps, the watermark is more clearly visible without watermark fluid than it is on the stamps of the first printing.
Third Printing - Dispatched On August 28, 1878
The last printing is very similar in all respects to the second printing. The main difference is that it is comb, rather than line perforated. Also, the green is a little lighter than the green found on the second printing.
I do not have any mint examples to show here, but I do have three used examples:

The colour on these is not quite as deep as it is on the stamps of the second printing above. Also, note how the corner perforations are all even and uniform - a characteristic of comb perforations.

Looking at the backs we see that all the stamps are on a smooth, white wove paper that shows no clear mesh. The watermark in all three cases is faintly visible, as in the case of the second printing.
Shades Of The 1/- Orange From The November 26, 1879 Printing
The colour of the 1/- orange from this printing is quite distinct from any that came before it or after it. There is a distinct "salmon" appearance to the orange. The most common shade is a salmon-orange, with another shade that is lighter. In both cases, the duty plate and head plate colours are identical. As I explained above, I believe that although there was only one shipment of these stamps to the colony, there were two printings that were made and combined together to make up the shipment.
I have one, single, solitary mint example of the salmon-orange shade, which as I have stated is an extremely rare stamp: 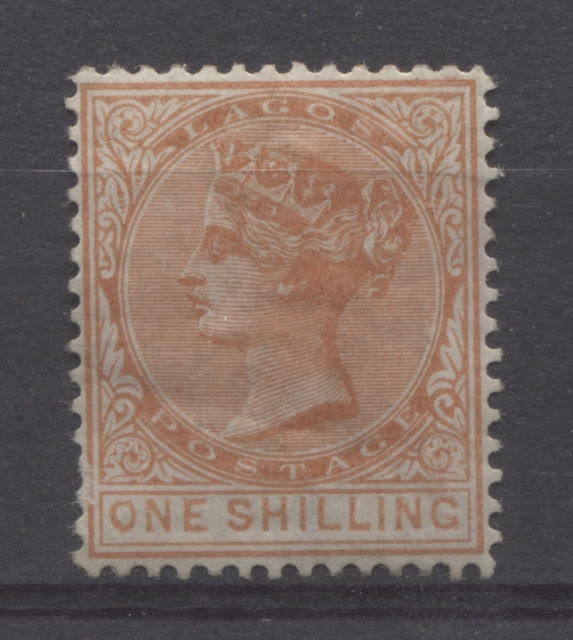 The colour is a deep dull orange that has a clear salmon-red undertone. 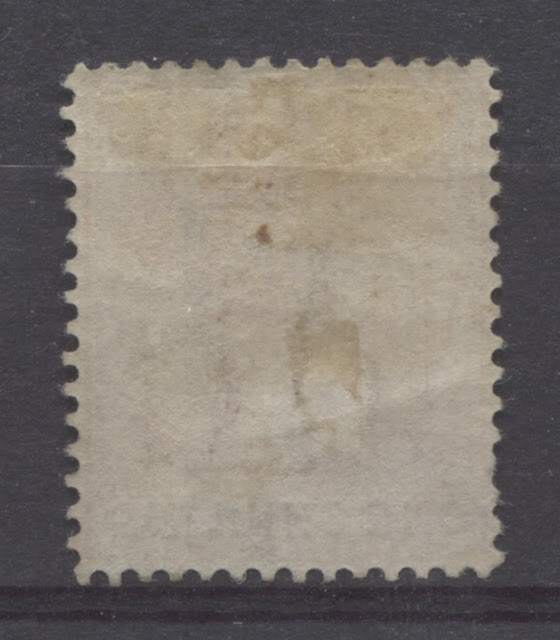 The back of the stamp shows the same paper type as the other stamps from this printing, being on a smooth, white wove, that shows no obvious mesh, and the thin, colourless gum that is characteristic of all but the last printings.
Now here are three used examples, two of which are in this shade, and one in a slightly lighter shade: 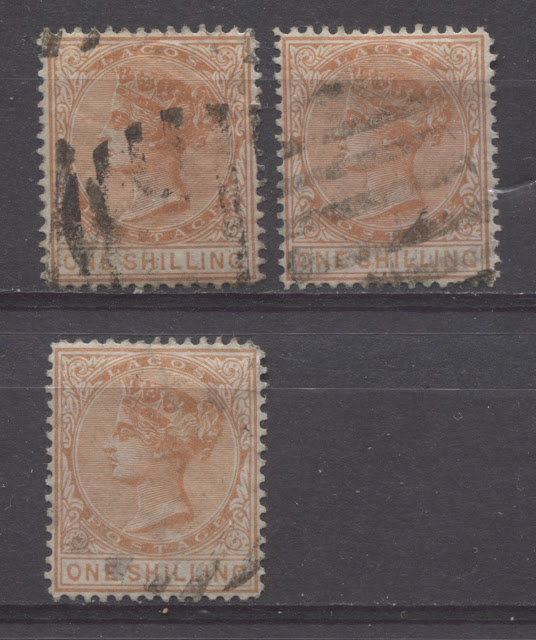 Note how the colour of all three of these stamps is the same deep dull orange with the salmon-red undertone. Also, as you can see, all three stamps, as expected, are line perforated. 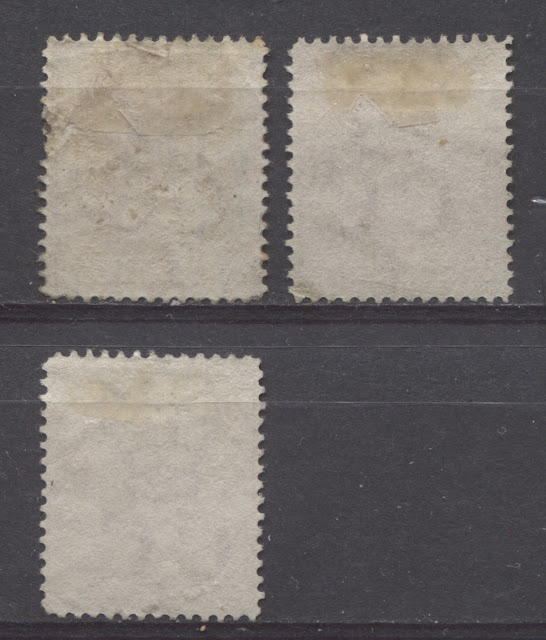 Looking at the backs, these stamps are all printed on a paper that is similar to that used for the early printings. It is white, smooth, shows no obvious mesh, and the watermark is barely visible without the aid of watermark fluid.
This brings us to the end of the second Queen Victoria Crown CC definitive issue. In 1882, the set was re-issued in the same basic colours, but on paper watermarked crown CA, which stood for Crown Agents. It is the last set to feature these colours, before the colours were changed starting in 1884, first to other monocolours, and then to bi-coloured designs in 1887. Next week, we will start to look at this third issue. It is a bit more challenging to distinguish because all the stamps are comb perforated - there is no switch from line to comb, and the cancellations used are almost exclusively the barred oval killer.