Today's will explore the six printings of the 2d blue from the second crown-CC keyplate issue of Lagos. This is a much more difficult stamp to sort than the 1d, due to the number of printings. I believe that the last two printings were comb perforated, while the first four were line perforated.

At a mere 106 sheets, of 60 or 6,360 stamps, this is the third scarcest of the six printings. The colour is very distinct, being a clear, dark blue. The colour is the same for both the head plate and the duty plate. The paper is a thin, hard wove paper, that has a fine vertical mesh. The gum is a thin, flat coulourless gum that has a satin sheen. The used examples that I have seen are all canceled with the Lagos diamond barred grid cancel.

Here is a scan of the front and back of my only mint example: 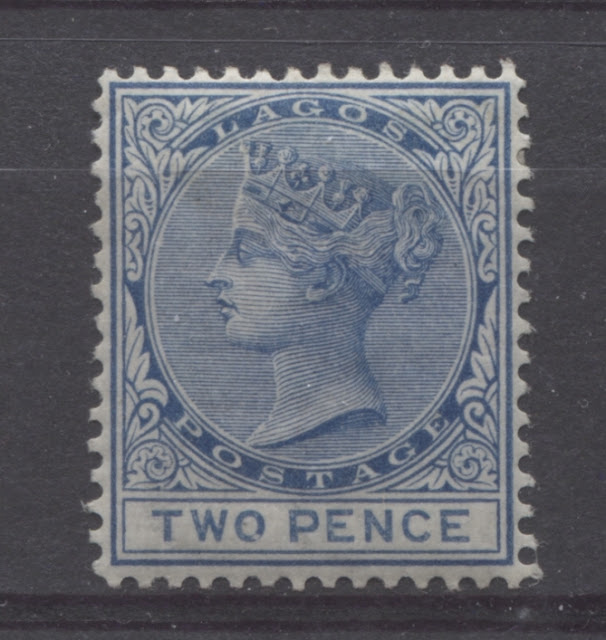 Notice how dark the blue is. There is no green, but a slight hint of black. 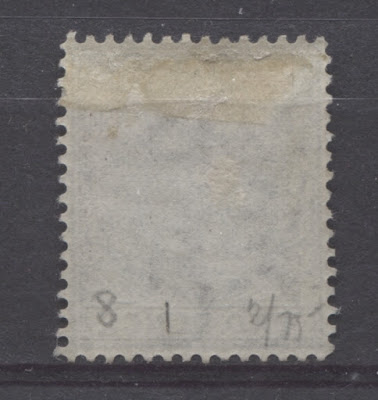 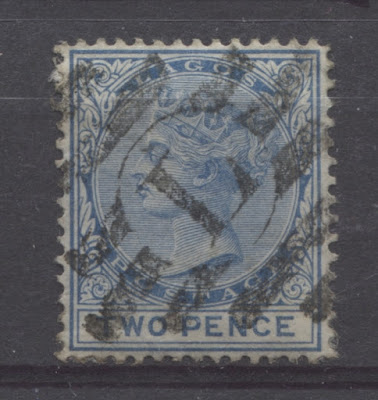 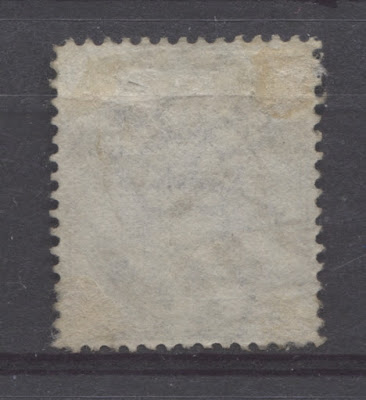 The mesh is not obvious, though you can just make it out if you look closely. The watermark is also not very clear without the use of watermark fluid.

This printing is the second scarcest, at 105 sheets of 60 stamps, or 6,300 stamps. I am very fortunate to have a single, solitary used example that bears a red, dated Liverpool Packet cancellation from March 1878. This means that it can only be either the first, or the second printing. It is closer to the shade of the third printing, than the first printing, which leads me to conclude that this stamp is from the second printing.

The colour of the head plate and the duty plate are very close, being a pure blue tending towards dull blue. The duty plate colour has a very slight greenish tinge, that is not present in the stamps of the third printing as we shall see. I do not have any mint examples of this printing, but I suspect that the gum will have the same characteristics as the first and third printings, being a flat, thin colourless gum. The paper is a thick, hard wove, with no obvious vertical mesh and in which the watermark is not readily visible.

Here is the front and the back of my only used example: 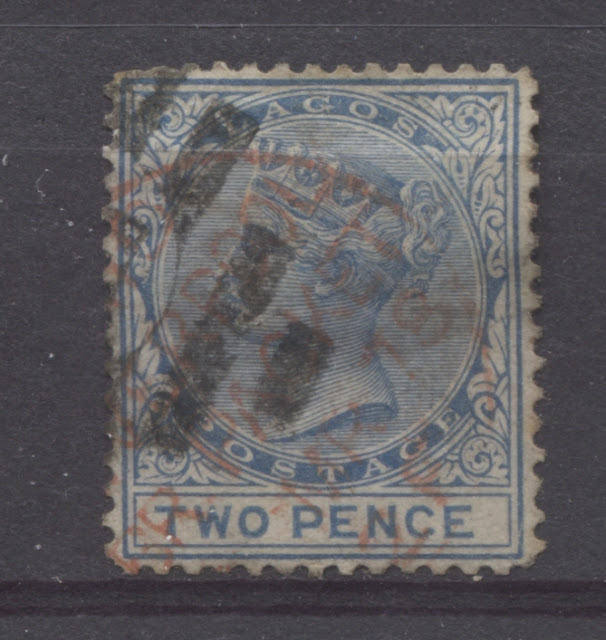 Notice that the blue colour of the head plate is not greenish, but the duty plate colour contains just the smallest hint of green. 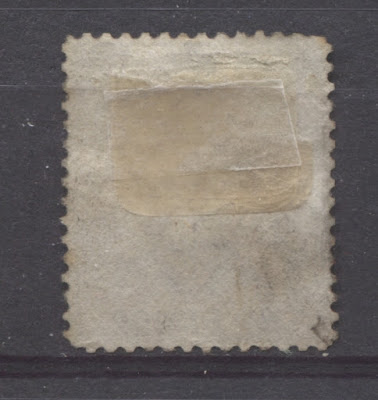 The paper is thick and opaque, with the watermark not readily visible, and no obvious mesh.

This is the second most common printing, at 200 sheets of 60 stamps, or 12,000 stamps. It is very close in shade to the second printing, but the blue is duller and lacks the greenish cast. The colour of the head plate and duty plates are identical, and the paper and gum characteristics are as before. There is some variation in the intensity of the blue, but in all cases, it is dull. All the used examples I looked at have been cancelled with the Lagos diamond barred grid cancel.

Here is a scan of the front and back of one of my many mint copies: 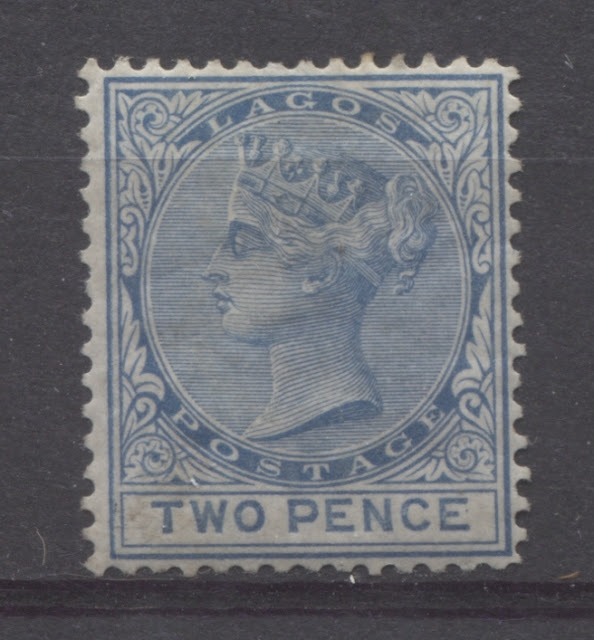 Note how dull the blue is, and the uniformity between the head plate and duty plates. 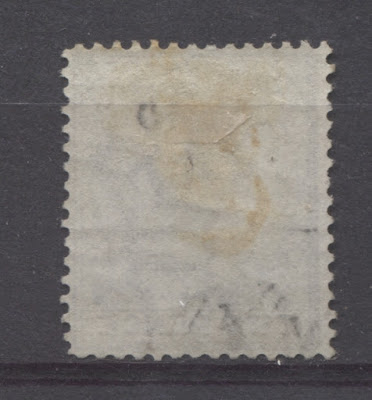 The characteristics of the paper and gum are the same as the last printing.
And now, a used example: 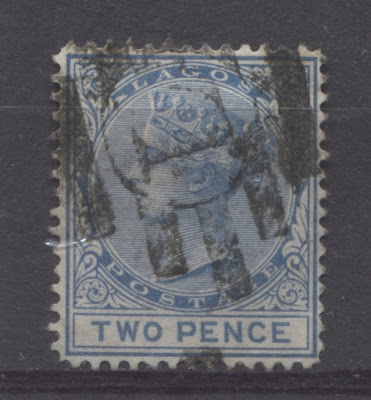 Note the same colour as the mint stamp, and the Lagos diamond barred grid cancel. 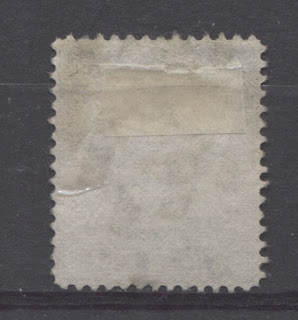 Again, neither the mesh, nor the watermark are obvious.

At 105 sheets of 60, or 6,300 stamps, this is tied with the second printing as the second scarcest of the printings that were made. I have identified this printing primarily by the colour, which for both the head and duty plate, is a very deep bright greenish blue. I only have two used examples, both of which are cancelled with the barred oval killer, which suggests very strongly that it is one of the later printings. The low number in my stock also supports the notion that it is from one of the scarcer printings. These can only be the first, second fourth and fifth printings. I have already identified the fifth printing as having a comb perforation, as you will see below, so it is not the fifth printing. It is neither the first, nor the second printing, because of the shade. So it must, by process of elimination, be the fourth printing. The paper is a thin, soft wove, that does not show obvious vertical mesh.

Here is the front and back of my nicest used example: 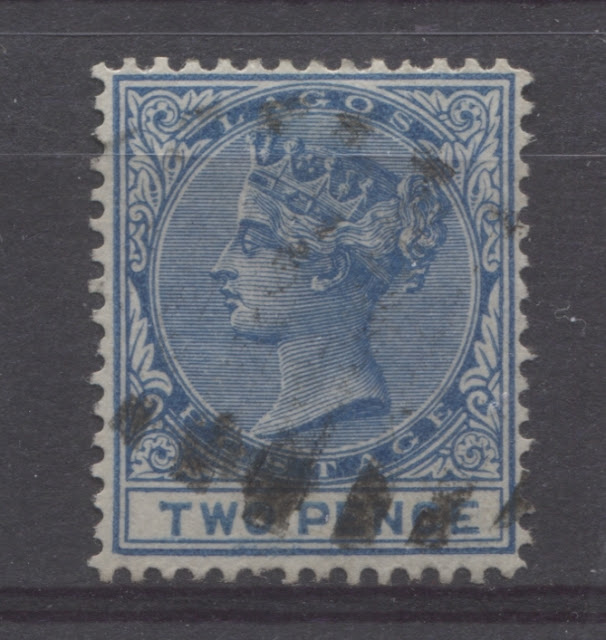 Note the very clear greenish tone to the blue. 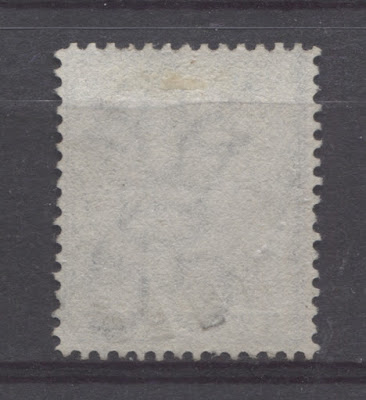 The paper is thin and soft, with no obvious mesh.

100 sheets of 60 stamps were produced for this printing, making it the scarcest of the six printings, at 6,000 stamps. The main distinguishing characteristic is the comb perforation, as opposed to line, which was the perforation used for the other four printings. The second main characteristic is the colour, which was the same for both the head plate and the duty plate. The colour is a deep pure blue that is neither greenish of greyish. The gum on mint examples is thicker and a deep yellowish cream, with a slightly crackly surface, and a satin sheen. This is a huge departure from the colourless, thin gum found on the earlier line perforated stamps. All the used examples I have seen so far, are cancelled with the barred oval grid killer.

The scans below show my only mint example: 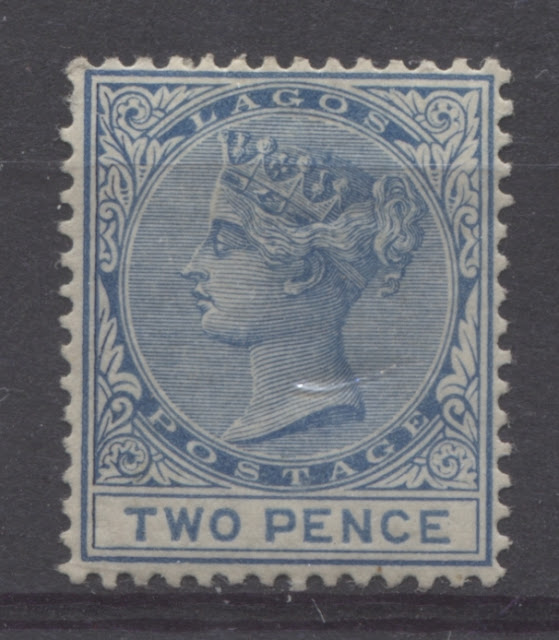 Note how uniform the colour of the stamp is. This example also shows a strong retouch along the inner framelines at left and in some of the ornaments. 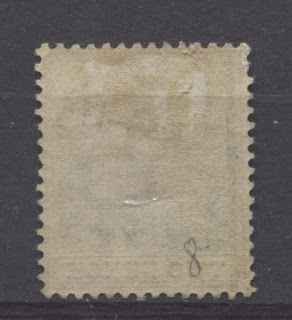 Here is the back, showing the thicker yellowish cream gum.

And now for a used example: 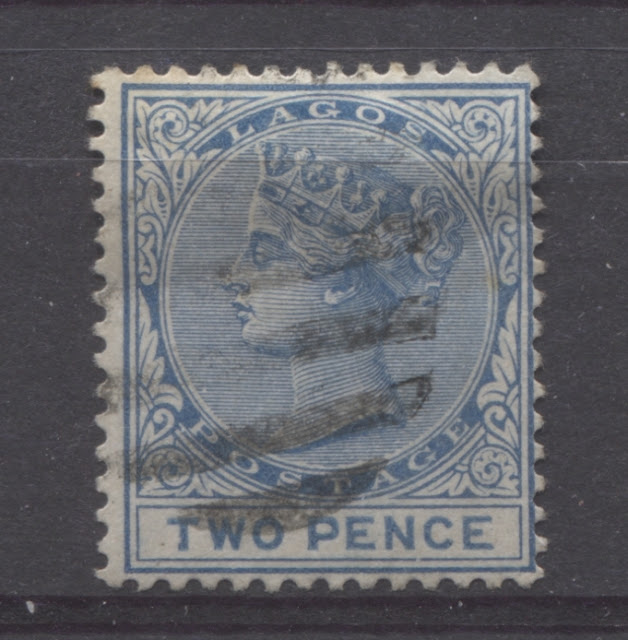 Again, you should be able to see a high degree of uniformity with respect to the colour. 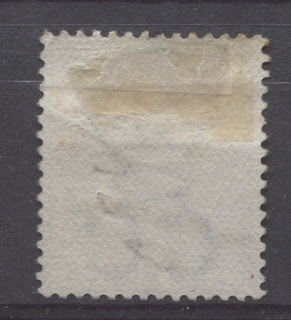 The paper shows very distinct vertical mesh, and is quite soft.

This printing numbered 203 sheets of 60 stamps, being 12,180 stamps in total, making it the most common printing of the six. There are several characteristics that distinguish it. The first is the comb perf. The second is the colour, which is slightly different for the head plate, and the duty plate. The head plate is a deep blue, that is neither greenish, nor greyish, nor is does it contain any black that would make it dark. It is just an intense, pure shade of blue. The duty plate (words of value) is a deep greenish blue. The paper can be found with obvious vertical mesh, as well as with much less obvious mesh. Finally, the vast majority of used examples will be cancelled with a barred oval killer, rather than the Lagos barred diamond grid. The gum on the one mint example I have is a thick crackly cream gum, with a semi-gloss sheen - very different from the flat, thin satin gum that is found on the earlier line perforated printings.

The scans below show the front and back of my only mint example: 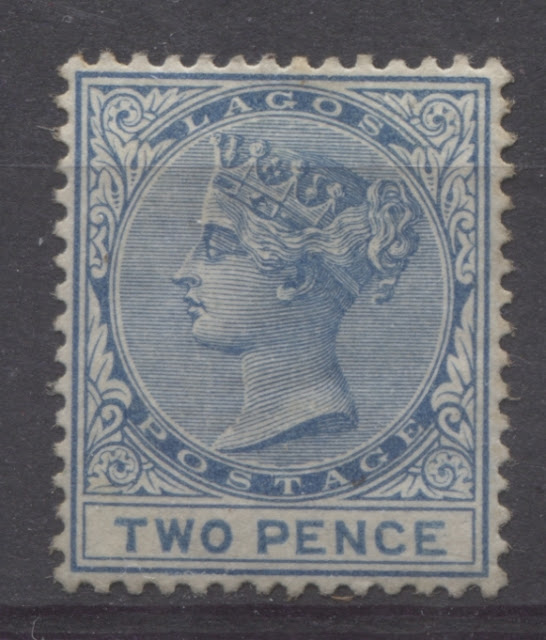 Notice the slight difference between the colour of the words "two pence" and the rest of the stamp. It is very subtle, but readily apparent if you look carefully at the scan.

As you can see, the gum is much thicker, with a more pronounced colour.


Now, here is a used example: 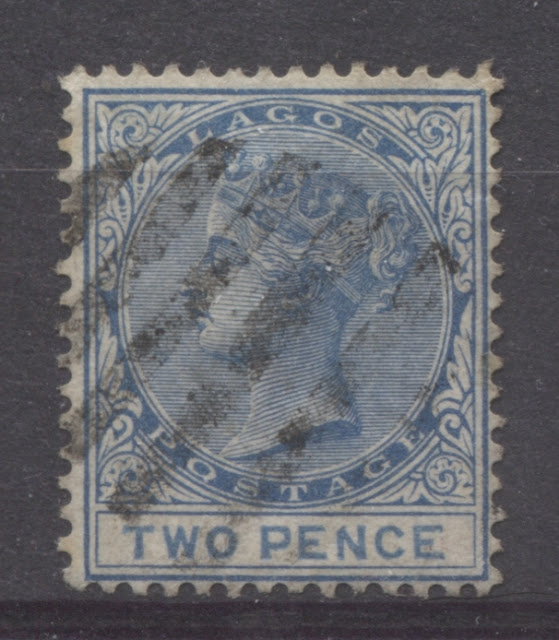 This example shows the "truncated N" on the word "Pence". I have seen this on other stamps, so I am fairly certain that it is a constant variety. Again, note the difference in colour between the head plate and the duty plate. 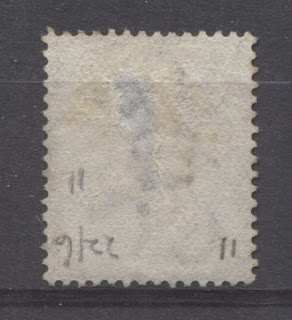 This example has  thin, but also fairly obvious vertical mesh.
Visual Side-By-Side Comparison of the Six Printings
Here are all six of the printings viewed next to one another: 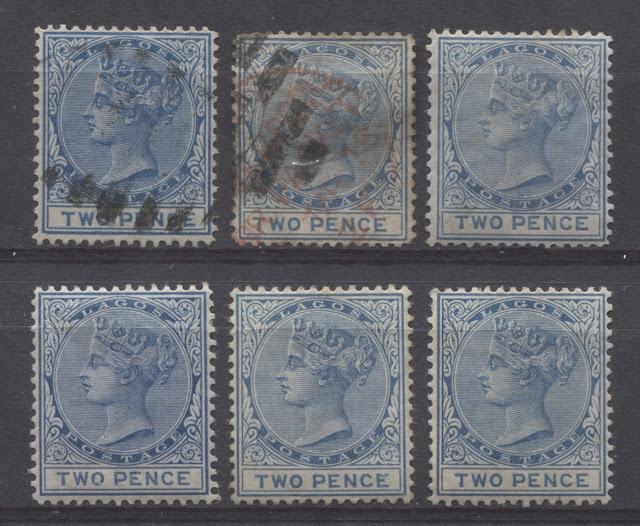 Along the top row: fourth, second and third printings. Along the bottom row are the first, sixth and fifth printings.
The backs of the stamps, when compared look like this: 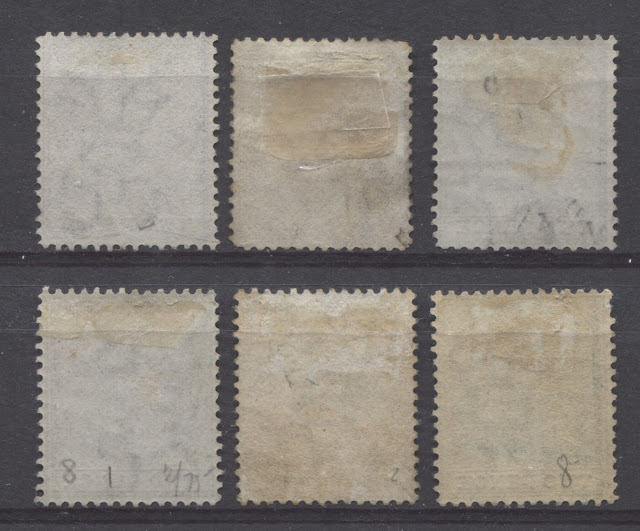 This scan shows the very clear change that took place in the chemical make-up of the gum toward 1880 and beyond, with the gum getting thicker, and deeper in colour.
This concludes my discussion of the 2d blue. The next value in the set, the 3d red brown, will be the subject of next week's post. It is a much easier stamp to sort, consisting of only three line perforated printings and one single comb perforated printing, which also happens to be the very distinct chestnut colour.