Today's post will delve right into the different printings of the second Queen Victoria keyplate issue, with crown CC watermark, starting with the 1d lilac, of which there were 4 printings made between 1876 and 1880. Where we relied heavily on dated used examples to assign specific stamps to a printing with reasonable certainty, we are unable to do so on this issue. Fortunately, we can generally conclude that any comb perforated stamps are from the last, or second last printings and then use the types of cancellations to divide the printings into 2 major groups:

1. Those made prior to 1879, which will usually, but not always be cancelled using a Lagos diamond grid killer.

2. Those made after 1878, which will usually be cancelled with a barred oval grid consisting of either 8 or 9 bars.

Thus, where there are 3 or fewer printings, of a stamp, these characteristics alone will generally be sufficient to assign stamps to a particular dispatch with relative confidence. However, where there are more than 3 printings, the assignment of these to specific dates becomes much more conjectural. Shade differences as well as relative quantities are used to postulate which printing a stamp is most likely to be from, though assigning with certainty is nearly impossible without covers that bear dates that can be used to corroborate the assigned dates already proposed.

So without further ado, let us take a look at the 1d lilac.

The first printing is the most common of the four printings, consisting of 400 sheets, or 24,000 stamps. This printing is in a pastel shade of bluish lilac, which can also be somewhat reddish. On all the stamps that I looked at, the head plate and duty plate (words "One Penny") were the exact same shade, suggesting that they were printed in one operation, from one batch of ink.. Used examples will nearly always be cancelled with the Lagos diamond barred grid killer. The gum on mint examples is very thin, and colourless, with a satin sheen, just as on the perf. 12.5 issue. Used examples generally will show fine vertical mesh on the back.

Below is a scan showing the front and back of a mint example from my stock: 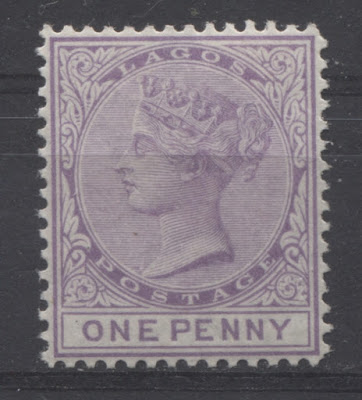 Here you can see that the corner perforations do not quite line up perfectly, proving that this is a line perforation. Note also the clear bluish tone to the lilac. 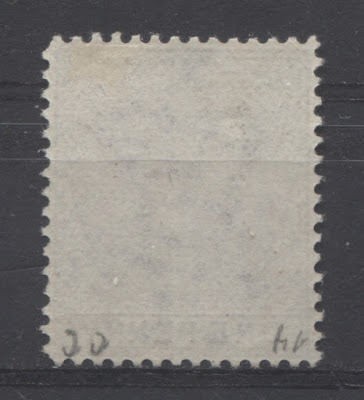 Here is the back. The stamp has full original gum, which as you can see is completely colourless. The mesh is just barely visible through the gum, and the watermark, though visible, is by no means clear.
Now, let's take a look at a used example: 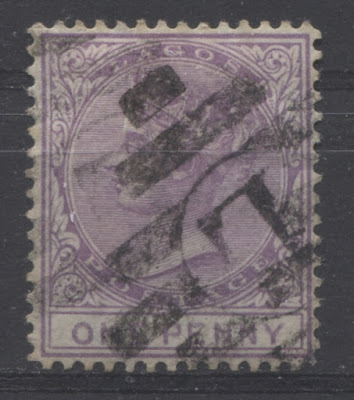 Although there is a bit more red in this shade, it is very close to the bluish lilac of the mint example above. It also has the uneven corner perforations, characteristic of a line perforation. Finally, and as expected, it is cancelled with a Lagos barred diamond obliterator. 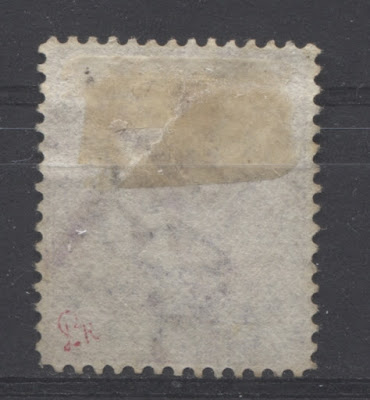 Looking at the back, we see the clear vertical mesh and a feint impression of the watermark.

This printing is the second scarcest of the four, consisting of 206 sheets of 60, or 12,360 stamps. It is the most distinct of the four in that the shade is an unmistakable, deep, bright reddish lilac. The duty plate is also a slightly different colour, being just a touch duller than the head plate ink. This suggests that it was printed in two operations, from two similar, but different batches of ink. Like the first printing, the stamps were all line perforated, and the paper is a coarse wove, showing very distinct vertical mesh.

Unfortunately, I do not have any used examples in my stock, but I do have an unused example: 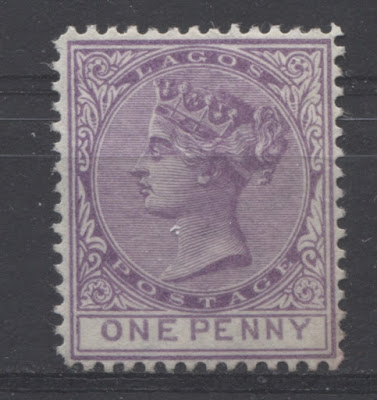 As you can see this is a much deeper, brighter, less bluish shade. Although difficult to see here, you can just make out that the colour of the letters "One Penny" is just, ever so slightly, different than the colour of the rest of the stamp.

Now, for the back: 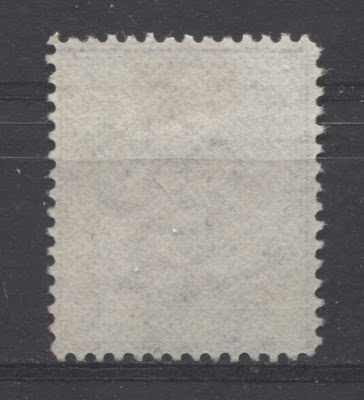 This example does not have any gum. You can clearly see that there is very distinct vertical mesh visible in the paper, though the watermark is not very clear.
Third Printing - Dispatched July 23, 1879

This printing consisted of some 305 sheets, numbering 18,300 stamps. The stamps of this printing are a much paler lilac than the first printing, and are actually very close in shade to the last printing. All of the stamps of this printing are still line perforated, despite the fact that the comb perforators had become available a year earlier. Used examples will have either a Lagos barred diamond grid killer, or a barred oval killer. Again, the duty and head plate shades are an exact match, suggesting that these two were printed in one operation from one batch of ink. The paper used for this printing was a thicker, smooth wove that shows no distinct mesh, and on which the watermark is barely visible. The gum on mint examples is thicker and starts to show a very fine crackly pattern. This is because De La Rue, in response to complaints received from the postmasters that the stamps were not adhering properly began to increase the thickness of the gum applied to the stamps. This would continue on the 1884-1886 issue, before the chemical makeup of the gum was changed completely in 1886 and became the gum that most collectors commonly associate with the keyplate stamps of De La Rue.

Below is the front and back of a mint example from my stock: 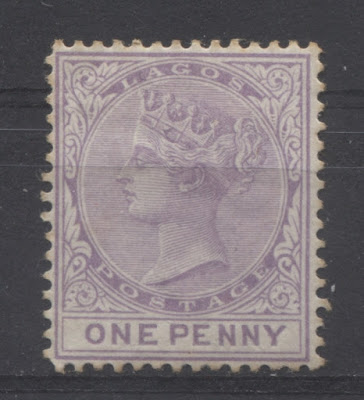 Here we see a shade that is somewhat similar to that of the first printing, but is noticeably paler. The corner perforations are uneven, confirming that it is a line perforated stamp. 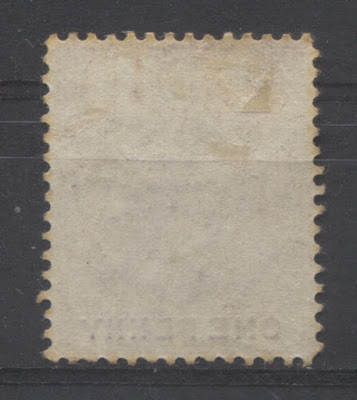 On the back, we can barely see any watermark, and no mesh. This example has full original gum, which is thicker than the gum of the first printing.
Now, let's take a look at two used examples. The first of these is cancelled with the earlier Lagos diamond grid killer: 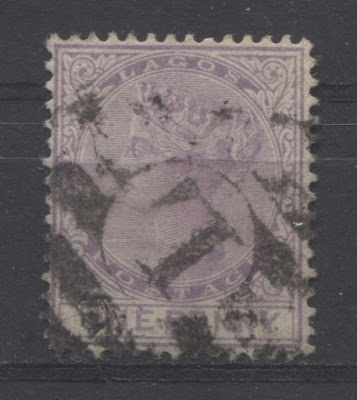 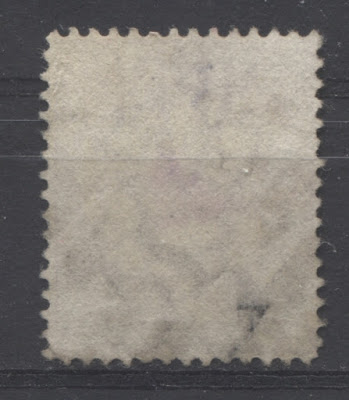 On the back we see barely any watermark or mesh.
The second used example is cancelled with an 8-bar oval grid: 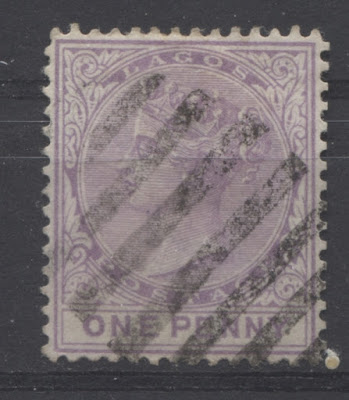 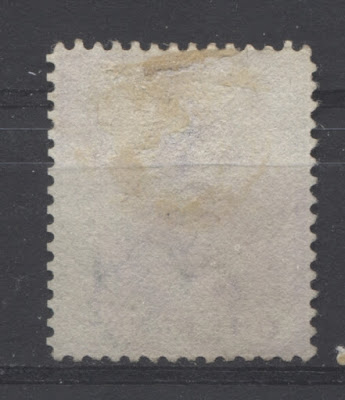 The characteristics of this stamp are almost exactly the same as the one with the Lagos diamond grid killer. According to Robson Lowe, the barred oval types appeared in February 1876, but according to the the West Africa study circle, this type was not widely known until July 1880. The Lagos barred diamond grid is apparently known used up until 1882, though it is generally all but replaced by the barred oval grid by 1880. This where a stamp is found with both types of cancellation, it is reasonable to assign it to the last line perforated printing, which in this case is this third printing from 1879.

This last printing consisted of 200 sheets of 60, or 12,000 stamps. It is easily identified by the fact that the perforation is the comb, rather than line perforation that was produced by the new comb perforating machines installed by De La Rue in 1878.

The shade of this stamp is a pale milky lilac, similar to the first printing. Furthermore, on all the examples that I examined, the duty plate and head plate are the exact same colour. The paper varies from a thicker white wove, showing no mesh that is very smooth, to a coarser wove that shows a fine mesh. The watermark on this first type of paper is visible, but feint, whereas, it is very clear without watermark fluid on the second type of paper.

Below are scans of both the front and back of a mint example from my stock: 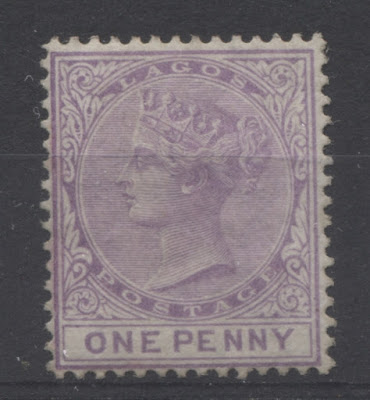 So you can see that the corner perforations are all even, indicating that it is a comb perforated stamp. The shade of lilac is clearly a pastel shade which is both milky and bluish. 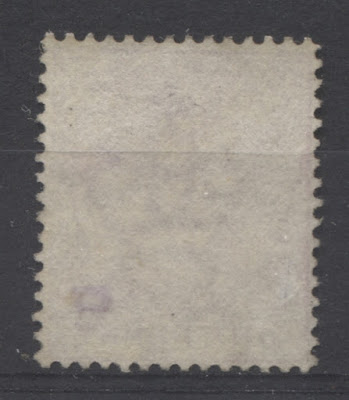 This example is on the first type of paper and only retained a small part of its, thin colourless original gum. Nonetheless you can barely see the watermark, there is no visible mesh, and the paper texture is very smooth.
Now let's take a look at the front and back of a used example on the second type of paper: 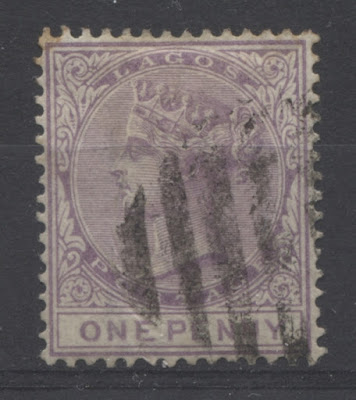 Here we see a very similar pastel shade and the same even corners as the stamp above. In fact, if you place these two stamps on top of one another, the perforations will line up perfectly. This is another way you can prove that they are comb, rather than line perforated. The cancellation is the expected barred oval killer, and this one appears, from the relative width of the bars, to be an 8-bar type. 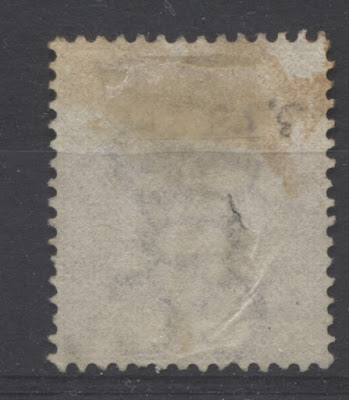 Here we see that the watermark is much more visible than on the first type of paper, and there is clear vertical mesh visible.
This concludes my discussion of the four printings of the second issue 1d lilac. Next week, I will look at one of the more difficult stamps, the 2d blue, of which there were six separate printings.