Today's post will deal with the sixth and final value in this first issue of Lagos: the one shilling orange. This stamp had the fewest number of printings, with only four dispatches between November 18, 1874 and May 13, 1875.

Unlike the other values which saw fairly heavy use, the 1/-, being a relatively high value for the time saw relatively less use. This means that it took many of the post offices much longer to exhaust their supplies than with the other values. The result is that cancellation dates cover a wide range with each printing, and overlap. In fact, it would appear that even though the last printing was dispatched in May 1875, it was not used until more than six months later, while the supplies of the earlier three printings were used up. Fortunately the other characteristics of the stamps supply us with enough clues to reasonably identify all four printings with reasonable certainty.

This first printing is fairly easy to identify because the G in the word "shilling" lacks a crossbar serif, whereas all the other printings have this serif. The colour is a pale dull orange, which sometimes contains a bit more yellow. There were 52 sheets of 60 printed, being 3,120 stamps. The scans below shows the front ad back of a particularly nice mint example: 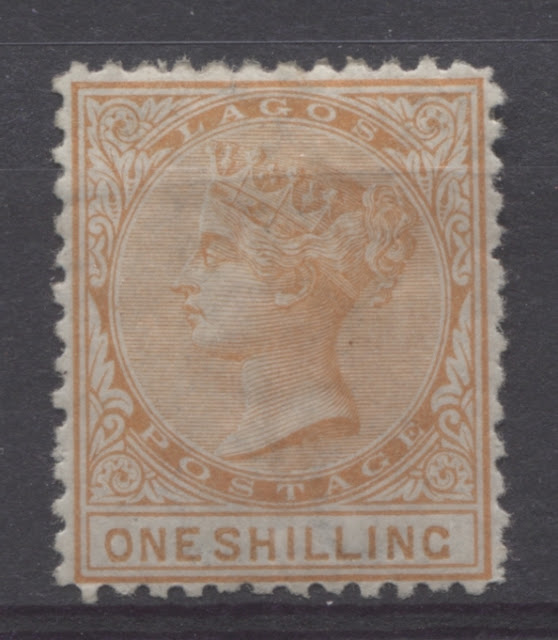 On this scan, you can clearly see the lack of a crossbar serif on the G, as well as the dullness of the orange shade. The width of the letters of "one shilling" is 15.5 mm. This is a very rare stamp: with only 3,120 originally printed, it is highly doubtful that more than 150-200 would exist today in the full range of condition grades.  The colour of the head plate and the duty plate (words of value) is identical, which strongly suggests that they were printed in one operation. 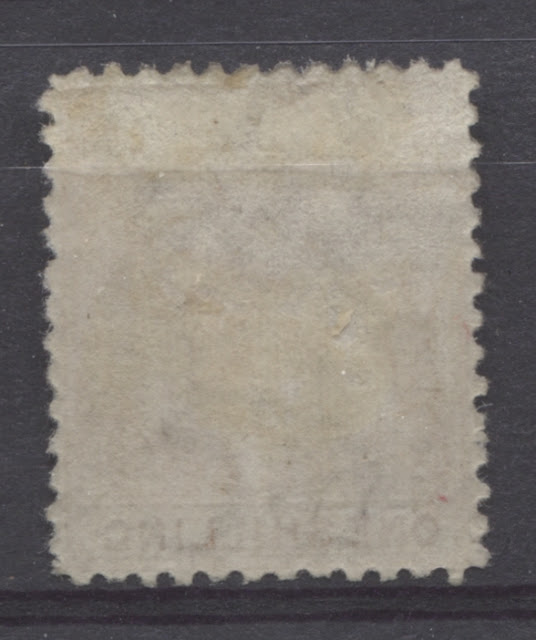 Here is the back of the stamp. It has about 75-80% of its original gum and as you can see, it is smooth and colourless. The paper is smooth and thick, showing no signs of mesh, which is consistent with the other values printed at this time.

The next two scans show a nice used example: 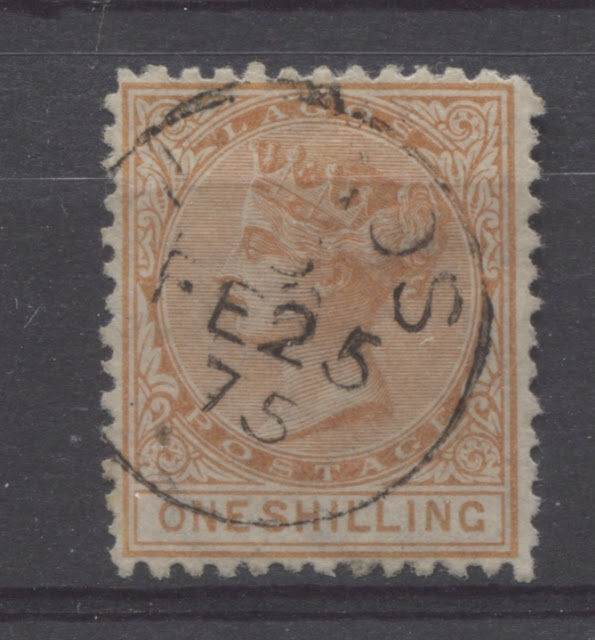 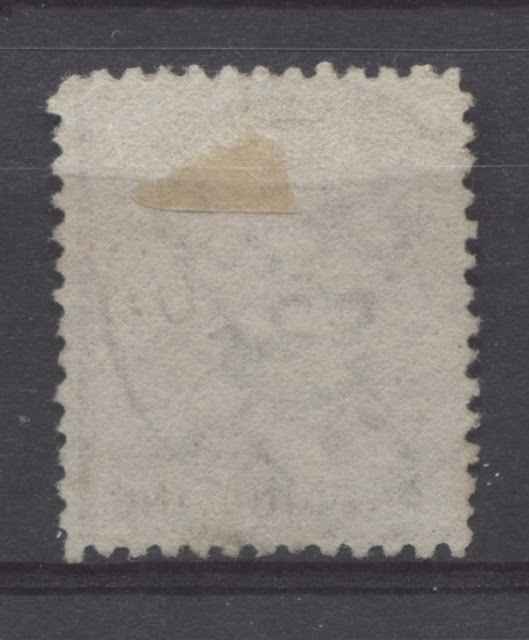 Again, we see the smooth appearance of the paper from the back, with no distinct mesh.

This printing also consisted of 3.120 stamps, being 52 sheets of 60. It is easy to identify because the shade is similar to the first printing, except that the orange is just a touch brighter, the lettering of the duty plate is thin just like the first printing, but the "G" of "shilling" has the distinct crossbar serif. The width of the letters "one shilling" on this, and the next two printings is 16.5 mm against the smaller 15.5 mm of the first printings.

The scans below show the front and backs of three typical used examples:

Once again, all of these have the smooth wove paper that shows no distinct mesh.

This was the scarcest of the four printings, with just 3,000 stamps printed. This printing is similar to the second printing except that the shade is both deeper and brighter, or in some cases contains a hint of brown. The paper also can be either the usual smooth wove, or it can be the wove that shows distinct vertical mesh. Again, the colours of the head plate and duty plate are the same.

Here is my only mint example: 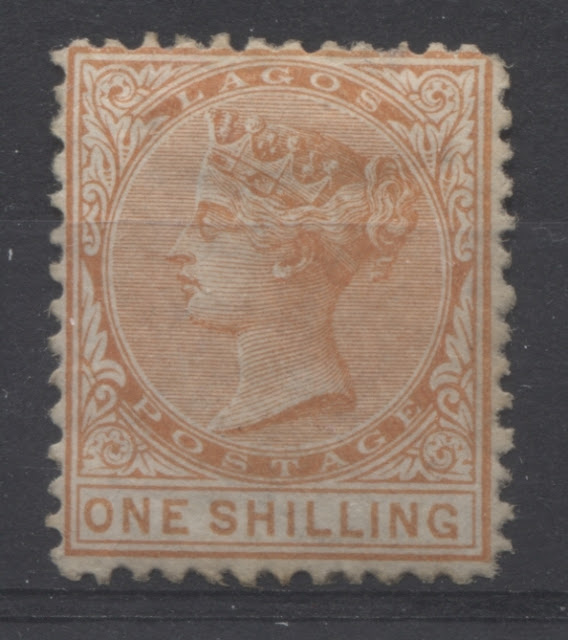 Here you can see the very distinct crossbar serif on the "G" and the shade is much deeper than the first and second printings. This one actually has a very slight hint of brown.

Now for the back of that stamp: 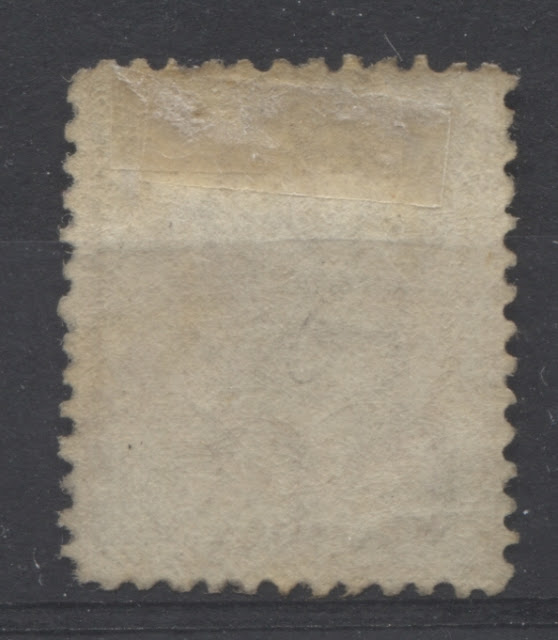 This example unfortunately has retained very little of its original gum, however, it is still  very rare and desirable stamp. On this example you can just make out the vertical mesh of the paper.

Here are some CDS used examples: 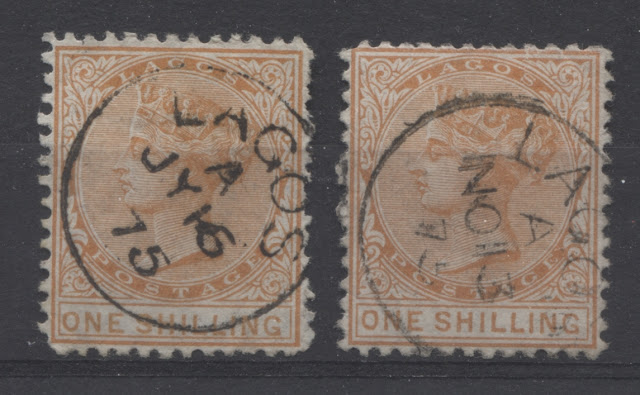 The stamp on the left contains more yellow than the one on the right, but both are still deeper and brighter than the stamps from the first two printings. These are dated July 16, 1875 and November 13, 1875 respectively. 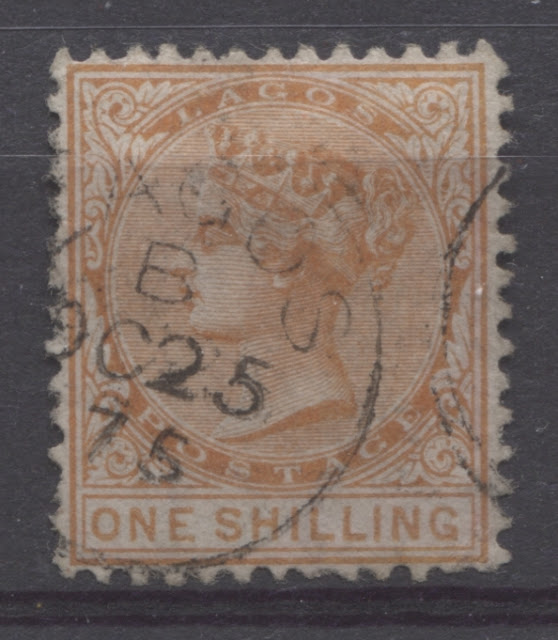 This example, dated October 25, 1875, is the brownish orange shade.
The backs of these stamps show both the smooth wove paper with no mesh, and the wove paper showing distinct vertical mesh: 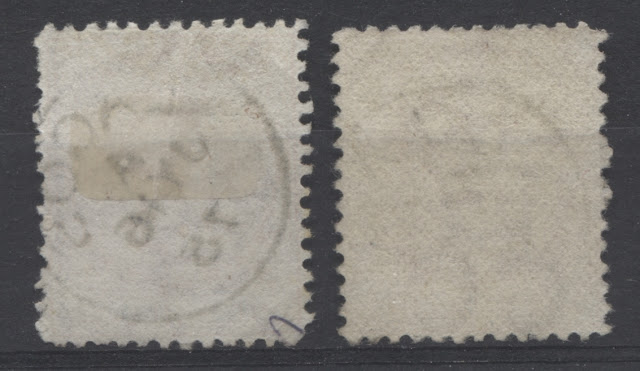 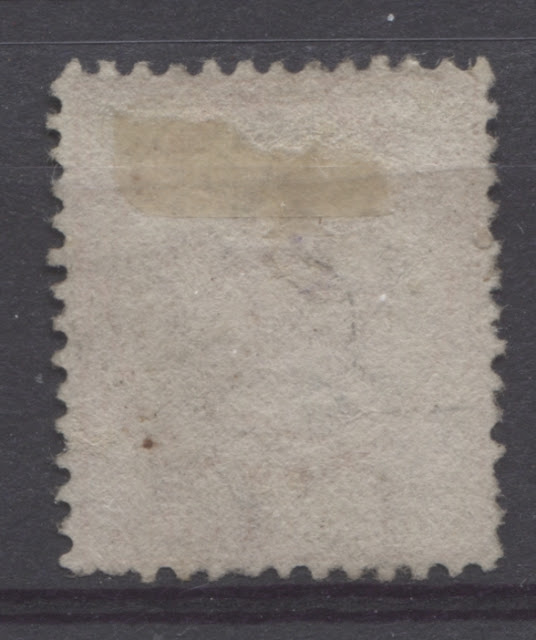 The paper of the brownish orange shade shows a hint of vertical mesh.

This is the most common of the four printings, with 6,360 stamps being printed. Most used 1/- stamps  that you are likely to find will be from this printing. There is quite a bit of variation in the orange, although all the shades are intense. I find the biggest identifying characteristic is the lettering of the duty plate which appears thick, heavy and slightly deeper than the head plate colour. The corners of the letters are softer and more rounded than the thinner letters which had sharper corners.

Below is one of two mint examples from my stock: 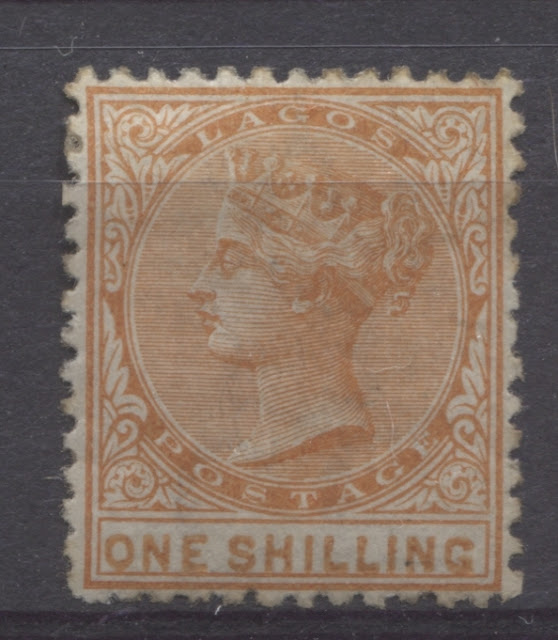 Notice the rounder, softer appearance of the lettering. It is particularly noticeable on the "G".

Here is the back of the stamp: 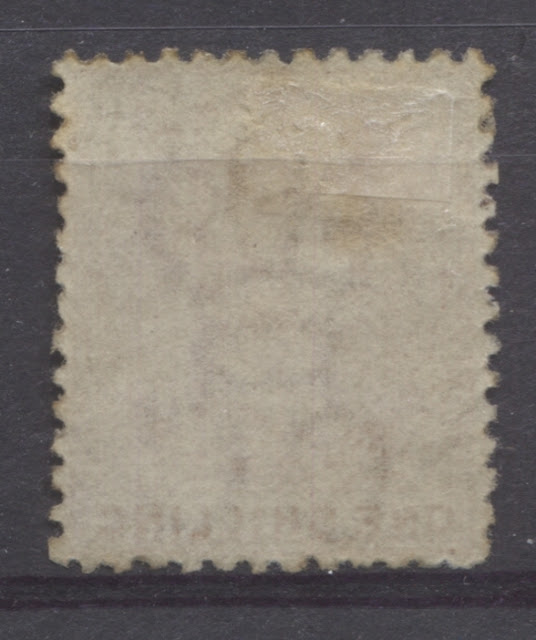 This example only has a small amount of its original gum, but the paper has reverted back to being the smooth wove paper with no distinct mesh.

Here are four used examples, all with the Lagos barred diamond grid killer that nonetheless show the range of shades found on this printing:

The stamp on the left is a deep, bright orange, while the stamp to its right is a bright yellow orange. The two stamps at right both contain a hint of brown to the orange. However, all four of these show the thick, softer duty plate lettering that is characteristic of this printing.

This value actually illustrates how insisting on CDS cancels for used stamps can be quite limiting. Every example of the fourth printing I have seen is cancelled with the diamond grid killer. So if you were to insist on CDS cancels, you would likely not be able to complete  collection of used examples of all four printings, simply because the CDS ceased to be used as a cancelling device in February 1876.

This concludes my coverage of this value, and thus the first issue of Lagos. In 1876, De La Rue changed the perforation of its stamps from 12.5 line to 14. As we shall see, until 1880 the method of perforating was line, but in 1880 printings were made that were comb perforated. My next series of posts will look at these second issues, being those watermarked crown CC and perforated 14.