Commemorative and Postage Due Issues from 1946-1959

I have been struggling to keep my promise to myself to post once a week at least. Life has been so hectic lately, but I must stay connected to my hobby, I find. Otherwise I start to wonder if I even want to continue collecting at all!

I thought this time, we'd take a step back to the commemorative and postage due issues that appeared just after the Second World War and that bridge the gap between two very attractive definitive sets. I have yet to show you either of these two sets, but I expect that I will do so over the next few showings of material.

With the notable exception of the postage due stamps, all of the commemoratives that I show you are part of Omnibus commemorative issues that were produced by the entire Commonwealth, with each member country utilizing the same common design, and changing only the colour, the denomination and the unit of currency.

The first one of these is the Victory, or Peace issue, which was issued on October 21, 1946. It consisted of 2 stamps for each member country, with the low value being sufficient to pay the local surface mail rate, and the higher value being sufficient to pay the foreign surface letter rate. It was recess printed by De La Rue. The design features a view of the Houses of Parliament in London on the Thames, with a vignette of King George VI to the right. 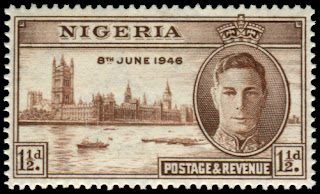 1.5d brown - there are two distinct shades of brown in which this stamp is found. 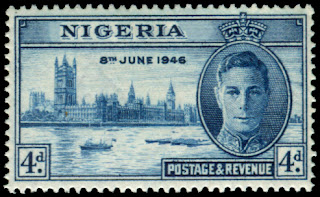 4d dark blue
Both stamps are readily found in mint condition, and in general, the centering is atrocious on this issue. The 1.5d is also not difficult to find in used condition. However, the 4d is a bit more challenging, and accordingly is worth considerably more than mint.
In 1948, King George VI and Queen Elizabeth celebrated their 25th wedding anniversary, and a set of stamps was issued to mark the occasion. In contrast to the other issues of the period, that had denominations only up to 1/-, this issue consisted of one low value good for paying the local circular rate, and one very high value which generally would only be used on registered letters of value and parcels. For most commonwealth countries the high value consisted of one pound or 10/-. However, Nigeria's high value was 5/- only. The set was very unpopular at the time because of the high face values and for a time there was pressure from collectors on the Crown Agents to surcharge the high values to lower denominations. Thankfully this never happened. The low values were printed by Harrison and Sons using photogravure, while the high values were engraved and typographed by Bradbury Wilkinson of New Malden in Surrey, England. The stamps appeared on sale on December 20, 1948. 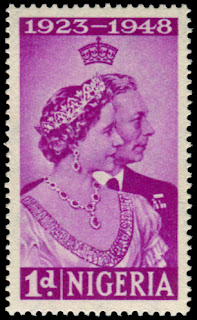 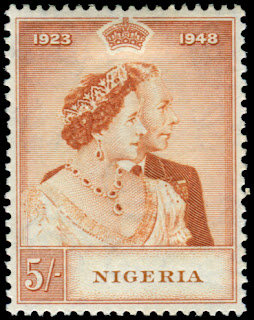 5/- Brown orange
In mint condition the set is relatively common, and the 1d very common used, but nice used 5/- stamps are difficult to locate.
Next, in 1949 the Universal Postal Union marked its 75th anniversary, and a very nice set was issued to mark the anniversary. Nigeria's set was the work of De La Rue, who printed the 1d and 1/- values, and Bradbury Wilkinson who printed the 3d and 6d values. All countries issued 4 stamps and the denominations were intended to pay the local circular rate, the foreign surface rate, and the 1/- was a make up stamp used in combination with other values to pay airmail rates. The stamps were issued on October 10, 1949. 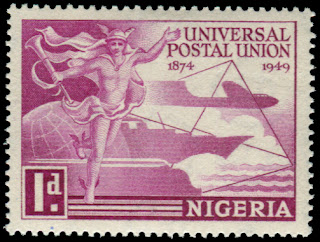 1d - Magenta - Mercury, the globe and silhouettes of a plane, ship and train. 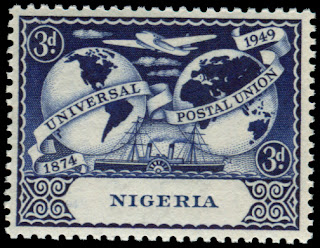 3d Indigo - Plane above two globes flanked by a steamship 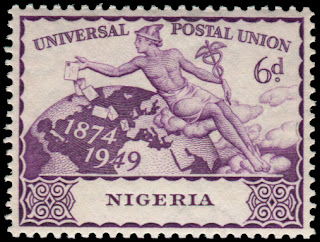 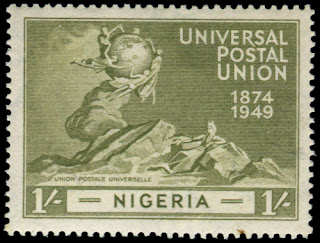 1/- Olive - Universal Postal Union Emblem
Like all of the previous commemorative issues, the set is readily found mint, and the low value is common used, but the 3 higher values used in period are much more difficult to find.
Upon the death of King George VI on February 6, 1952, a 26 year old Princess Elizabeth became Queen Elizabeth II. It would be over a year before her coronation on June 2, 1953. A very beautiful set of single stamps was issued by the Commonwealth, in the denominations sufficient to pay the local surface mail rate. Bradbury Wilkinson was the printer of these very attractive stamps. This set appeared on Coronation day on June 2, 1953. 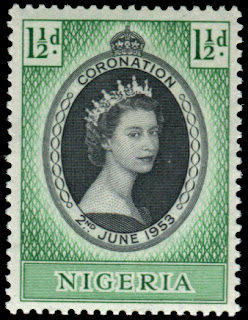 1.5d Emerald Green and black.
This issue is common mint and used, although nice town cancels are more of a challenge, and would make a nice collecting topic, for not a lot of money.
As far as postage due stamps go, Nigeria got into issuing them really late in the game by world standards. The first set, shown below was issued on January 4, 1959 and was lithographed by Bradbury Wilkinson. 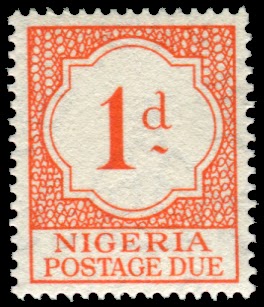 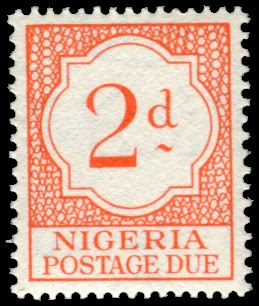 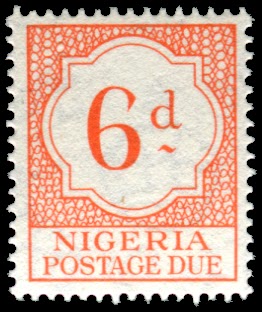 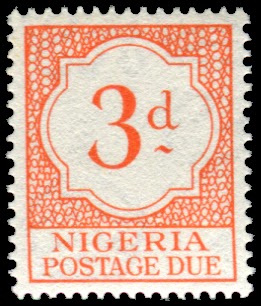 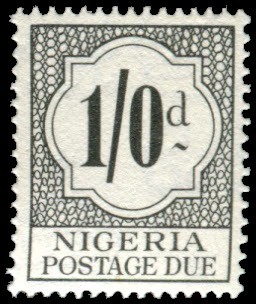 There were four values. The 1d, 2d, 3d and 6d were printed in orange and the 1/- was printed in black. The general rule with these issues was that whatever the shortage was in the affixed postage, the postal clerk would double it and affix that amount of postage due stamps. The deficiency then had to be paid by the recipient when they picked up the letter. They were not that popular, as evidenced by the fact that used examples are as scarce as hens teeth. The catalogue values suggest this scarcity, but in reality they are much harder to find than you might think. I would happily buy used examples all day long at full Gibbons prices!
Next up - the King George VI Definitive Issue from 1938-1953. Stay tuned.