Last week I wrote a broad overview of the first King Edward VII Issue of Lagos, which was issued in 1904. I left off with an examination of some of the potentially constant plate flaws that occur on the issue, that are not listed in Gibbons. This week, I will show you some of the cancellations and postal history that can be found on these stamps.

Before I get into the specific cancellations, a word on the rarity of the high values in postally used condition. This issue had a useful life of no more than 9 or ten months. Last week we saw that there were no more than between 720 and 1,680 stamps issued in total - mint and used. The high values would have seen very little usage, as they would really only have been required on very valuable registered items. So it is highly doubtful that more than 5% or 10% of these stamps would have been used during the life of this issue, so the number of total extant used stamps is probably not more than 150 or so of each of the 5/- and 2/6d and maybe 75-100 of the 10/-. In addition to the overall rarity, is the fact that the green ink used for printing is doubly fugitive and fades with exposure to water. Thus, most of the used examples would have faded when they were soaked off envelopes. So, examples with full, original colour are extreme rarities that are vastly undervalued in the standard catalogues.

Without further ado, I present to you the cancellations and covers that I have of this issue.

In the above scan, we have two Abeokuta CDS cancels dated August 5, 1904 and September 29, 1904. The middle stamp is badly faded through exposure to water and provides an excellent illustration of what I was just talking about with respect to the green ink. On the right we have a Lagos CDS cancellation dated June 10, 1904. The Abeokuta cancellations are noted to be reasonably scarce in the Proud Bailey handbook. 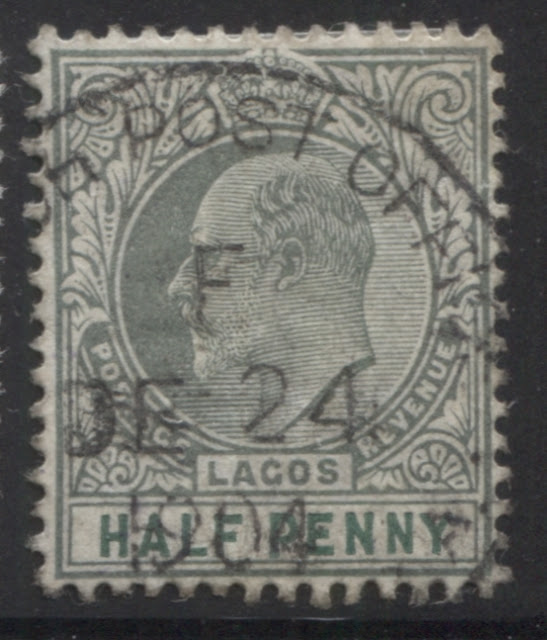 This cancellation is difficult to pinpoint, but is an unusual one from December 24, 1904. The place name ends in an H, but does not seem to fit any of the village names currently listed in Proud as ending in "H". So this may be an unrecorded postmark.
1d Purple and Black on Red

This a a selection of about half of the Lagos CDS cancels in my collection. I have another half dozen or so just like the ones shown here. They are generally not rare. The cancellation with the larger letters fourth from the left and the Post Office cancellation are a little more unusual, but again, not rare by any means. 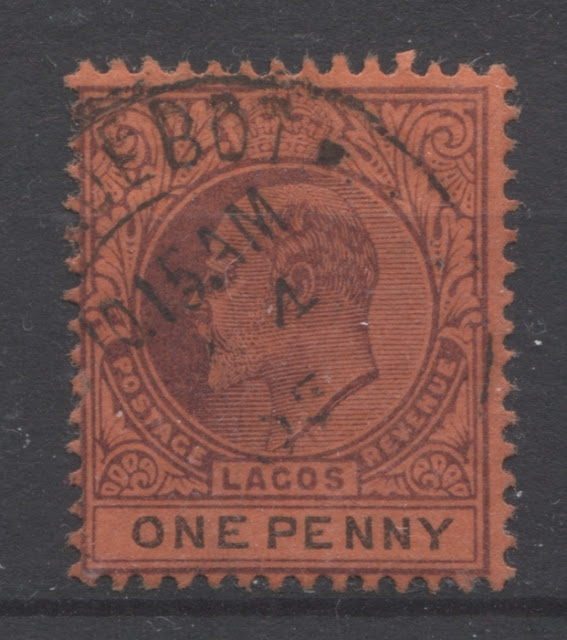 Another selection of nice Abeokuta strikes, including one from March 11, 1904, which is quite an early date, as most of these are from June to August. Two types are shown here, both of which are listed in Proud. The smaller type is actually scarcer than the larger type, and is valued 4 times higher.

Here we have three more cancellations that are a little more unusual. The one on the left is Shagamu. The stamp in the middle is Ibadan, while the one on the right is Ebute Metta.
2d Purple and Royal Blue 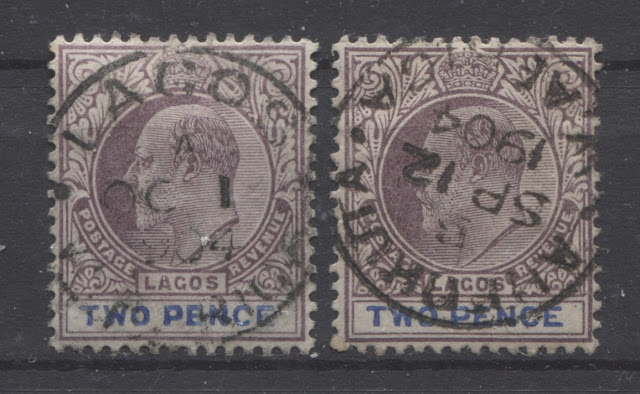 Here we have nice strikes of Lagos and Abeokuta, dated October 1, 1904 and September 12, 1904 respectively.

These are Plymouth Paquebot cancels.
2.5d Purple and Ultramarine on Blue

These are all type 2's. The stamp on the left has a late strike of a Forcados cancel dated June 30, 1907, which is after Amalgamation. Forcados was part of Niger Coast Protectorate, and so one would not usually see such a cancel on a Lagos stamp before amalgamation had occurred.  Although not complete, I know that the cancel on the pair is Aboh, which is one of the scarcer villages from this period.
3d Purple and Chestnut

Here, we have some nice legible strikes of the Lagos CDS. As you can see these are generally all dated late in 1904. 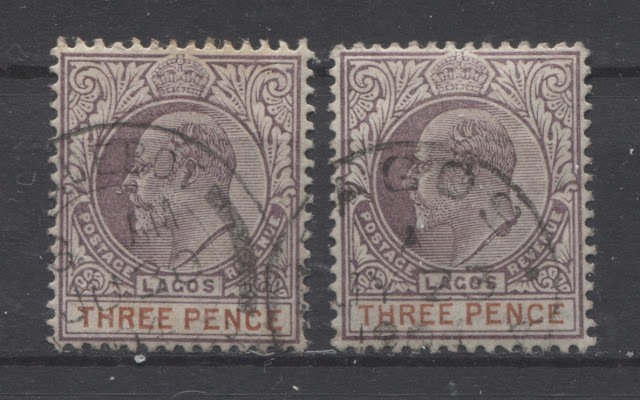 Here we have another example of a Plymouth Paquebot cancel, and another Lagos CDS, this one dated in July 1904.
6d Purple and Plum

Here, we have four examples of the Lagos CDS, only these ones are a little different from the smaller type that we usually see from this period. Also, on the right is an example of the straight line Lagos Government Telegraphs cancellation. The CDS's are Proud type D16, which Proud notes is possibly telegraphic.
1/- Dull Green and Black

This is one value for which I did not have any really nice strikes of any particular cancellation. On the left there is a partial Lagos registered cancel, while the middle stamp is a messy strike of a Lagos CDS dated January 30th, which is a very early date, as the stamps were put on sale on January 22 - a mere week earlier. The stamp on the right is another example of a Plymouth Paquebot cancel.
2/6d Dull Green and Carmine Not a good used example of this high value, but the best one that I have. It is almost completely faded, having only about 25% of its original green colour. It has a messy but readable strike of a June 25, 1904 Lagos CDS cancel. Like I said earlier, as terrible as it is, it is still one of only about 125-150 in existence.
5/- Dull Green and Ultramarine 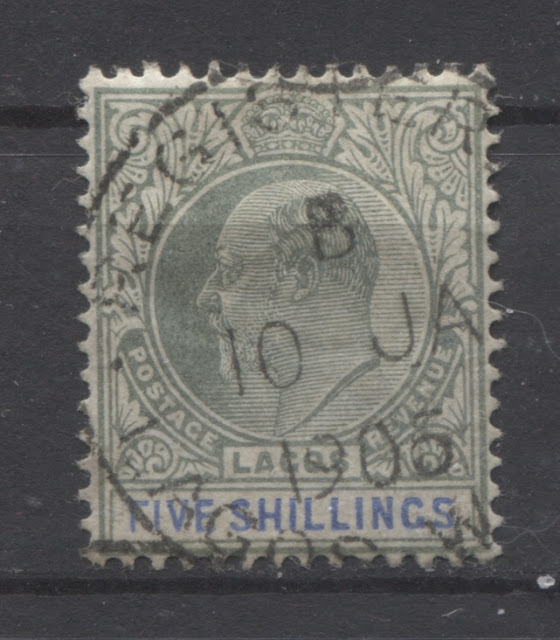 This is a suberb rarity: a genuine postally used example dated January 10, 1905 - a little after the MCA issue replaced this one, but not much. The cancellation is a Lagos Registered CDS that is listed in Proud as type R8. What makes this so suberb is that in addition to the centering, and the clarity of the cancel, the colour is completely, 100% full and original.
10/- Dull Green and Brown 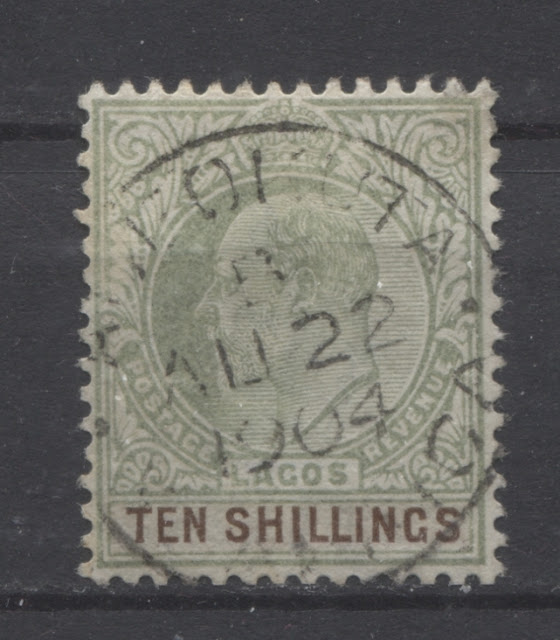 This is another nice stamp. It is faded partially, but not too badly. It has about 50-60% of it's original colour, which is not bad for a stamp that is this rare. In addition, it is canceled with a clear August 22, 1904 Abeokuta cancellation, which is one of the scarcer villages.
Postal History
Most of my postal history from this period is from the next issue, with the multiple crown CA watermark. However, I do have a few pieces, including some mint postal stationery items that I can show here.
Postal Stationery
The first item of mint postal stationery that I have is a registered envelope as shown below: 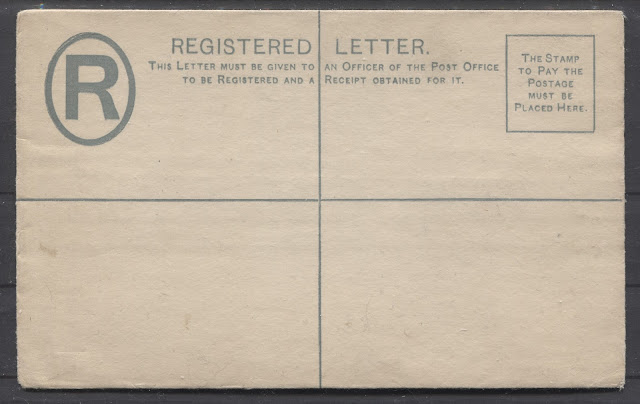 This envelope is about 7 mm longer and 5 mm wider than a standard postcard of the period. The instructions and dividing lines are printed in the same colour as the stamp indicta on the reverse, which is a grey blue. 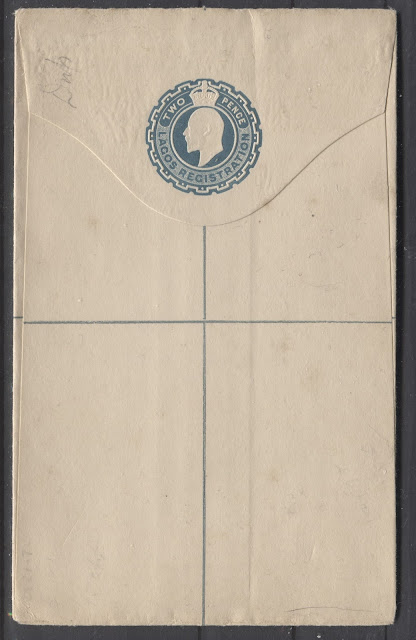 Here is the back of the same envelope showing the stamp indicta, along with the knife and the crossed lines, which indicate that the envelope is registered. The 2d stamp indicta is there to indicate payment of the registration fee. The sender then had to add the regular postage to the envelope to make up the correct rate.
The second piece of mint postal stationery that I have is a postcard on buff card stock. which bears a carmine stamp indicta, which differs from the design of the issued stamps: 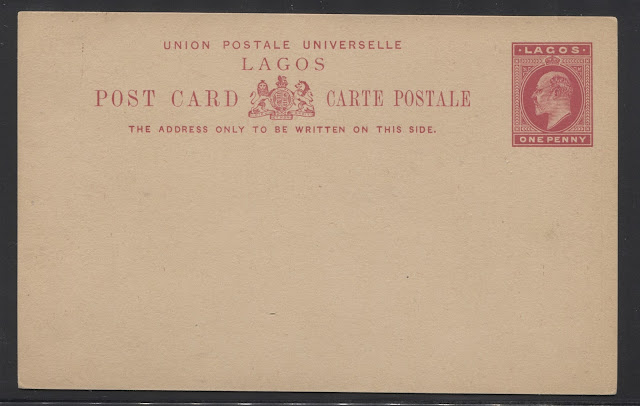 The card is completely blank on the other side where the message would have been written.
I have but one registered cover franked with the stamps of this issue: a 5d registered cover sent to Cheshire on July 27, 1904: 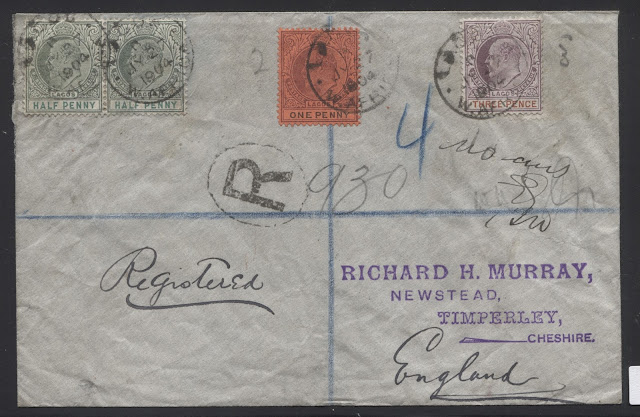 The normal postage rate to the UK at this time was 2.5d, and registration was 2d, for a total of 4.5d. So this cover appears to have been overpaid by 1/2d, which is odd, given that there is a pair of 1/2d stamps on the cover. but the placement of the 1d stamp is such that it looks like it was applied after the blue registration markings were drawn on the envelope. It seems that the clerk noticed that the envelope was only franked with 4d, and needed to make up the deficiency, but did not have any more 1/2d stamps, and so used a 1d instead. It would further appear that there was no answer when delivery was attempted as indicated by the "No Ans" notation in pen on the front.
Finally I have one used registered envelope sent to Accra, Gold Coast and one postcard to the UK: 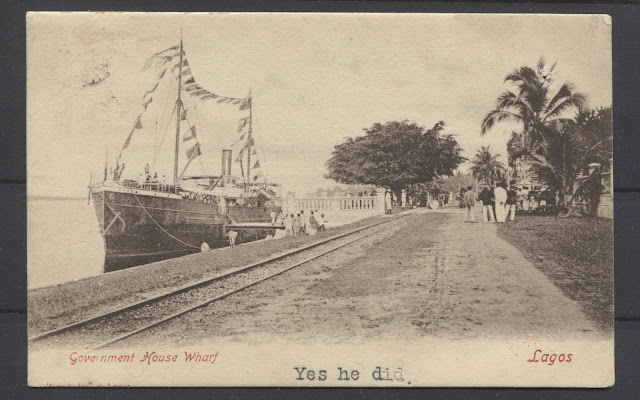 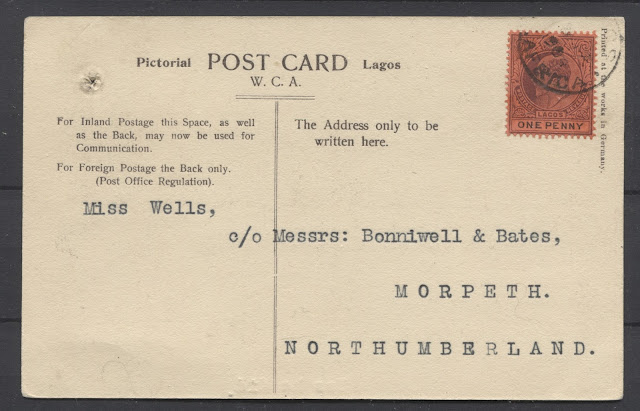 An interesting postcard, sent when the regulations still prohibited any message from being written on the address side for a foreign sending. The cryptic message "Yes he did" appears typewritten on the back. Clearly the card was sent in response to a question that had been asked in a previous letter. The date of the cancel is not completely clear, but it is from 1904, and so likely is the first issue. 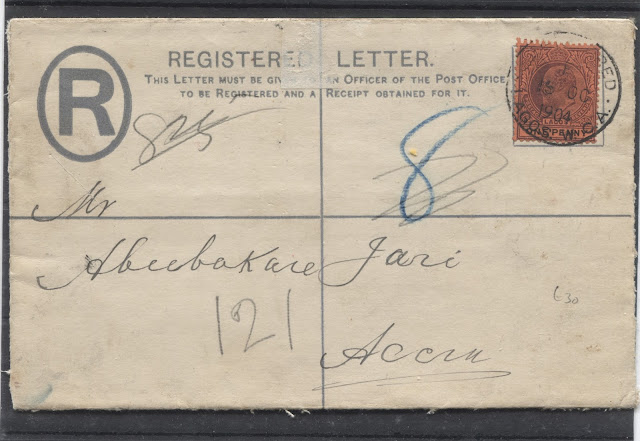 The front of a registered envelope, printed in a deeper shade of the grey blue, but the same size as the mint envelope shown earlier. This was sent to Accra, Gold Coast on October 15, 1904. Accra, was considered to be an inland destination, even though it was another colony, and was this rated at 1d, so that the registered envelope required only a single 1d stamp. 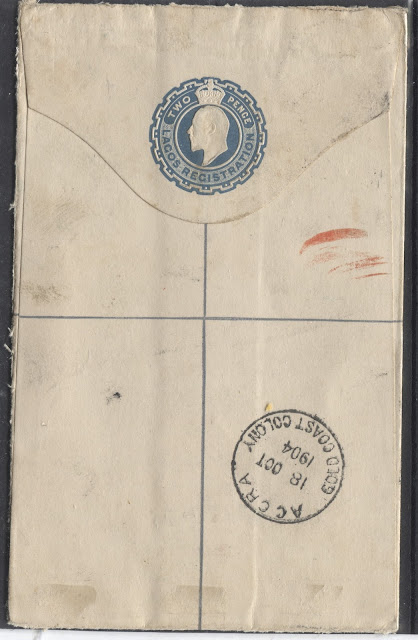 The reverse of the envelope shows that the letter reached Accra on October 18, 1904 - 3 days later.
This brings me to the end of my discussion of the first Edward VII issue of Lagos. Next week, I will start looking at the second issue that was in use up to amalgamation and beyond.
Filed in: 1904 Crown CA King Edward VII Issue of Lagos