Before I continue my posts on the Admiral issue, I thought it would be a fun to do a post on the top under-rated topics and collecting areas within Canadian philately. What is actually very interesting is that there are many areas in Canadian philately that offer the collector a challenge, while at the same time offering a great sense of accomplishment as their collection grows. There seems to be a very widely held perception among philatelists that there is nothing worth collecting after World War II, and many believe that the cut-off point for that is even earlier - as early as the Admirals. In addition, as I have written about many times before, there is an obsession now with obtaining perfection of condition, with the result that many otherwise interesting and fruitful areas are ignored or neglected because the material simply doesn't exist in perfect condition. So without further ado, here are my top 8 picks of areas that are under-appreciated relative to their catalogue values:

1. Post 1952 postal history
2. Complete booklets prior to 1956
3.  Plate blocks prior to 1962
4. Choice used multiples of almost any issue that are cancelled in-period
5. Almost all Newfoundland material, especially choice used with town cancellations.
6. Complete sheets.
7. Modern paper varieties - i.e. Rolland, Slater, Clark, Peterborough, Harrison and Coated Papers.
8.Postage due stamps.
Post 1952 Postal History
Many philatelists loathe the preponderance of modern commemorative issues that have caused the number of basic Scott numbers to go from the low 300's in 1952 to well over 2,500 stamps today. Most collectors have been conditioned to see this material as nothing more than discount postage. However, the emergence of this material gives rise to a new area of philately that is challenging and offers up some really gorgeous material: registered or special delivery covers that have been properly franked with either souvenir sheets or se-tenant multiples that are properly used to pay the postage on commercial covers, IN THE PERIOD THEY WERE ISSUED. Sure, thanks to dealers using early stamps for postage, there are tons of covers in existence that have all manner of stamps used years and often decades after the fact, but how often do you come across a commercial, non-philatelic, cover used to an exotic foreign destination where the postage was properly paid with a souvenir sheet or a high value commemorative from the period? The answer is not very often at all. And when you do find them, they are surprisingly gorgeous items. Just look at these examples: 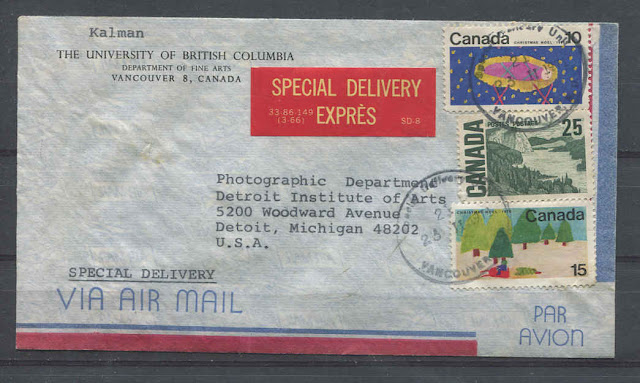 This 50c special delivery cover to the US would be unremarkable if it were franked with a 50c Summers Stores, which is the 50c stamp that was current in February 1971, when this cover was mailed. However, this cover was paid with both high value Christmas stamps from 1970, which are hard to find on cover as well as a 25c Solemn Land. In addition it has a nice  special delivery label attached. 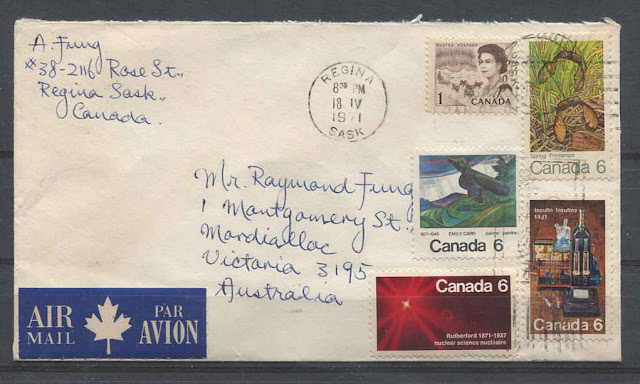 This 1971 airmail cover to Australia has the 25c airmail rate paid using four different 1971 commemorative issues plus the 1c Centennial definitive - a very unusual thing to find, since most of these covers would have been paid with a 15c stamp plus a 10c stamp, or a 25c stamp. It is unsual enough to find four 6c stamps, but to find all four from a different and CURRENT commemorative issue, is a real treat.
Aren't these just gorgeous? Several commemoratives used in the year they were issued to make up the higher registered or airmail rates that higher value definitives would ordinarily have been available for.  In fact, if I had to collect all over again, I would challenge myself to find all of the post 1952 se-tenants, booklet panes and souvenir sheets used properly on covers or parcel wrappers. I highly doubt that I would complete it, even if I had all the money in the world and 10 lifetimes to search. And that illustrates nicely how under-valued a lot of material is in Unitrade. I would be completely comfortable paying $25-$150 each for the covers I just showed you and yet, you will find most of these priced at under $10 each on a dealer's table at a show. Why? because it is modern, and the conventional wisdom is that modern material just doesn't have much value.

So what to look for in the postal history then? Well there are several things to look out for:

Unfortunately many of the field stock sheets have been broken up before their significance was well understood, with the result that many of the scarcer paper types no longer exist in full sheets. This is still a relatively new field in Canadian philately and although many discoveries have been made over the years, there are still more discoveries to be made for sure.

Up until 1983 most of the modern issues after about 1971 were printed on a chalk-surfaced paper manufactured by a company called Abitibi-Price. In 1983 Abitibi-Price went out of business and Canada Post was forced to seek out alternate paper suppliers. Quite a number of suppliers have been utilized since then including:

Each of these papers has their own characteristics which can be distinguished. Most issues are printed on only one kind of paper, and Unitrade has generally identified which paper is the standard one. Occasionally though, one can find stamps printed on a paper different from the standard. We start to see these crop up in the late 1980's with the wildlife definitives. These changes in paper were never announced by Canada Post and they were hitherto unknown until philatelists discovered them. The 74c Wapiti on Rolland paper (the normal was Harrison) and the 45c Walrus perforation change on Slater paper (again the standard paper was Harrison) are among the greatest rarities of the period. I am sure that more such varieties exist and are just waiting to be found. This is yet another reason why I consider the whole discount-postage craze to be sheer humbug - because who knows what rare mint stamps are going to be destroyed, just so someone can save a few cents on postage?
My comments here deal mostly with the post 1983 papers, but they can apply equally to the papers of the 1960's too. I have for instance, found a copy of the 5c White Garden Lily Emblems stamp from 1964 on hibrite paper - something that should not, but does exist I can assure you. The rarest of all the Centennial definitives, the 6c orange tagged stamp on Hibrite paper, a stamp that catalogues $1,600 now was unknown mint until 1987 - 18 years after its issuance.
So I think that the careful study of modern mint stamps, especially if you focus on field stock panes and blocks is bound to reveal additional rarities eventually.
Postage Due Stamps
This is yet another highly neglected area of Canadian philately, again, I would venture to suggest, because the stamps are all located in the back of the albums and catalogues. It is a shame, because all of the postage due issues offer plenty of scope for the specialist. It's just that Unitrade ignores practically all the shade and paper varieties on the various purple and violet issues so that collectors really have no idea, from reading the catalogue listings, how much potential these issues hold. Used multiples and copies of the higher value stamps with CDS cancels instead of the normal crayon or pencil cancels are a joy to behold and not that common.  Some of the basic stamps are very scarce with the numbers issued being very low. For example, only 1,000,000 of the first 10c violet, 309,000 of the second 10c violet and 500,000 of the third 10c violet were issued.
The fourth set, which came out in 1935 and was not replaced until 1967 was in use for 32 years! Why that is longer than the Small Queens! In fact it is thee longest running of any Canadian issue. Now I ask you, how can a set in use that long, have so few listed varieties? There are shade, paper and gum varieties galore on these, and the great thing is, they are not expensive at all.
Even the first through third issues provide plenty of shade, paper and gum varieties, with the first issues providing wet versus dry printings too.
These are some ideas of some areas to seriously consider if you are looking for a new specialty and if your funds are limited. I can think of more, but these are all really good choices I think.

I’ve been specializing in the 1935 postage due series for about a decade. Some of the ink and paper varieties are indeed uncommon. For example, neither the red-violet shades or the HB paper varieties are that difficult to find, but plate blocks of the same are truly rare in my experience. However, while the postage due stamps series was used over many years, the question is how many different printings were made? Unlike similarly long-lived definitive issues, the number of postage due stamps actually used is minuscule in comparison. Consider what number of letters processed actually required the application of a postage due stamp by the post office—one in a thousand? one in 10 thousand? So given the small quantities required, there may be been a relatively small number of printings depending on minimum order quantities. I have to assume at least two printings because of the red-violet ink printings, but I have to wonder if the HB paper resulted from a separate, small printing or if it was simply a case of some HB paper from another printing job being used to top up a late printing of the postage dues that had run out of the regular dull paper.

Since I am planning to exhibit, I’ve picked up some examples of postage due covers, even though I am not normally a postal history collector. For some reason, it has been very difficult to find a cover with the 3c (J16B) either as a single or multiple.