This is one of the few values in the Admiral series, whose basic colour was not changed throughout the entire life of the issue. The only other stamp which were in use throughout the entire period from 1912 to 1928 was the 50c, which will be discussed in the next post. Unitrade does list several shades of this stamp and most of them have been assigned sub-numbers by Scott. However, I find the names of the colour groups to be misleading, given how different they are from the actual colours, as classified by the Stanley Gibbons Colour Key. The listed shades are:

This is another value in which it pays to know your paper and gum characteristics. The reason is because what Unitrade is really doing when they list these shades is to list and price particular groups of printings:
The problem with the shade names in Unitrade is that neither the sage green, nor the grey-green are true to the sage-green or grey-green colour swatches in the Stanley Gibbons Colour Key. In relative terms, when compared to the other stamps, they clearly do appear sagey and greyish, but I see a lot of stamps from the grey-green printings being misidntified as the cheaper dark olive green, when they need not be.
This post, in keeping with all my other posts on this topic will show you examples of each Unitrade listed shade, and will then cross-reference these shades with the Stanley Gibbons Colour Key names, modified as necessary when a shade has black or white added, or is paler or deeper than the swatch.
The Olive Green Dry Printing Shades 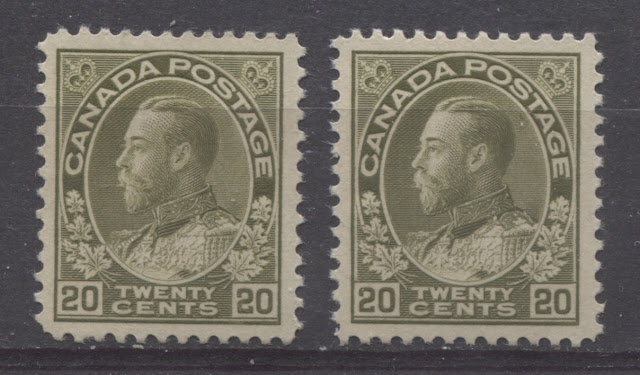 These two stamps are both dry printings without the re-touched frameline. They are listed in Unitrade as being  olive-green. However, neither one is a pure olive green. As a matter of fact, both are greyish olive in Gibbons Colour Key, with the stamp on the left being paler than the one on the right.

The above stamps are all examples of stamps that I would classify as part of the sage green group. To me the distinguishing characteristics of this group are that the greens are either yellowish or greyish and lack the brown tones that belong to the deep olive green group. In fact the stamp on the left is greyish olive - exactly the same shade as on the dry printing stamp above, except that this is a wet printing. Some may classify this as dark olive green, but I have included it here because the shade is very different from the other olive shades that belong to the dark olive green shade group. From left to right we have:

These stamps are all examples of the common dark olive green shade group as listed in Unitrade. All of them have a distinct olive and brownish tone, that the stamps of the other groups typically lack. As I stated above, this is a bit of a catch-all group for the common shades of the wet printing stamps. From left to right we have:

These are all examples of the Unitrade listed grey-green. As you can see they all have a greyish cast, though they are not actually the true grey green as identified in the Gibbons Colour Key. They are actually, from left to right:
These shades are very distinct compared to the others. However, it is easy to see how a collector who had not seen the other shades and was trying to identify the stamps using the Unitrade shade names could mistake these for the more common dark olive green.
Comparing the Shades
The scan below shows a side-by-side comparison of each of the above shade groups, which will hopefully make the identification a little easier:

From left to right we have:
If you compare the first image with the third image, you will see that the colours look similar with the third image being darker. This is consistent with Unitrade's classification as olive-green and dark olive green respectively. The fourth image does not look like olive green at all, and is greyish, which is why Unitrade calls it grey-green. The tricky colour here is the sage green in the second image, which at first glance looks similar to the dark olive green. What gives it away though is the almost complete lack of brown in the colour, being very yellowish in comparison. I find that a good way to spot this shade on mint stamps is to look for paper that shows almost no mesh, and for gum that is yellowish cream in colour, and shiny, but without any texture to it. The earlier 1912-1914 gums often have a streakiness, or are clear and allow the mesh of the paper to be visible, while the later post 1918 gum is usually a creamier colour and has a slightly textured look, as paint would appear when applied to a wall with a roller.
This concludes my discussion of the shades of the 20c olive green Admiral stamp. All that remains now to complete the discussion of shades is the 50c and the $1, which I will cover in my next posts. Once I have finished dealing with the shades, I will discuss other aspects of this issue, starting with paper and gum, as well as some more general posts about collecting in general to give a break from highly technical stuff.