Today's post picks up where I left off last week on the 1932-1949 Resources issue of Newfoundland. It has been  remarkably popular topic, and rightly so, given the visual appeal of the stamps and the scope that the issue affords specialists.

There is only one constant plate variety listed in Unitrade for this series, and it is known as the "Broken A in Land" on the 3c carmine red Waterlow Printing. Ir comes from  position 49 in the sheets and an example is shown below:

As you can see from the scan above, it is really nothing more than plate damage, that shows up as two distinct smudges inside the "A" of "Newfoundland". It is quite scarce and highly sought after by specialists.
Sheets of Newfoundland stamps are very scarce in general, so it is very difficult, if not impossible to plate many varieties that might be found on their stamps. Plating is generally required to prove conclusively that a particular variety is constant, and not a freak. Unitrade's editorial policy, along with that of most other stamp catalogues is to generally refrain from listing varieties that are not constant. So just because no other plate varieties listed in Unitrade does not mean that there are none. I think that there must be at least some on the values up to and including the 7c, which all saw very heavy usage. They just need to be found, studied and documented.


Re-Entries
Ralph Trimble, the prominent authority on re-entries lists only two re-entries on this issue. Both are major re-entries and both are on the 5c caribou. The first is on the Perkins Bacon printing, and involves doubling within the letters of "Newfoundland", along the left frame, and in the letters of "Cents" and the "5"'s. You can view his high resolution scans by clicking this link:
http://www.re-entries.com/nfld6_1932definitives.html


The second re-entry occurs on the Waterlow printing of the 5c caribou. The doubling on this one is almost exclusively in the letters of all inscriptions. You can view the scans of it here:
http://www.re-entries.com/nfld9_postlongcoro.html
I have seen several other examples of stamps that show doubling in the designs, although many of these may be slip-prints rather than re-entries. The stamps that I have seen these on include the 1c grey-black codfish, and the 4c Princess Elizabeth from the 1938 printing. Given the number of plates used on the values up to the 5c, and the number of stamps printed, it is my expectation that there should be at least some re-entries on values other than the 5c.
Imperforate Pairs and Partially Imperforate Multiples
There are a very large number of imperforate varieties on this issue - perhaps more than on any other Canadian stamp issue. To begin with, imperforate pairs exist for every value of the Perkins Bacon printings, except for the 4c blackish lilac, including the 1938 revised low value designs. In addition, all of the Waterlow printings, exist as fully imperforate pairs with various sized security punches. The 1c, 5c and 14c exist in fully imperforate pairs with no punch as well. This is not what makes this set unusual, as most sets from this period exist with imperforate pairs. What makes it unusual is that the Perkins Bacon printings can be found in both horizointal pairs that are imperforate between the two stamps, as well as vertical pairs that are imperforate between the two stamps. In addition, singles and booklet panes that are imperforate at just the top, or the bottom can also be found. The existing varieties can be summarized as follows:

Horizontal Pairs That Are Imperforate Between

Vertical Pairs That Are Imperforate Between The BNA proofs website list over 220 proof items, ranging from essays, to progressive proofs, to trial colour proofs, to die proofs and finally to plate proofs. On the Waterlow printings, the plate proofs that they list with the punch holes are most likely the same material as the imperforate pairs mentioned above. This material is every bit as scarce as other Canadian proof material, but much less expensive. The material listed on the three sections of their website, can be summarized as follows:
Original Perkins Bacon Issue
http://www.bnaproofs.com/nfld-pict1932.html

All of the values of this issue can be collected quite readily on cover. The low values are very common, and of little premium value, and most of the other mid to high values, while more expensive on cover, than off, are not, by any means expensive. One idea is to try to collect a single usage of each stamp, or a series of exotic destinations. Most covers will either be going to the US, Canada, or the UK, so looking for covers addressed to other countries is a fun pursuit.
In addition to covers, many of the low values were often used on cheques, in place of revenue stamps. The scan above shows a cheque from the Bank of Montreal on which the required excise tax was paid using a 3c stamp, instead of the normal revenue stamps.
Finally, the collection of small village cancels is a very appealing challenge on these stamps, as the vast majority of used examples will be cancelled in St. John's. Newfoundland had a very limited number of smaller towns and villages. Most of these utilized split-ring hammers, and finding these on any of the stamps of this issue is a challenge. Forming a large collection that covers all values and all villages or towns is a lifetime project.
First Day Covers
Single first day covers exist for all values of the original set, as well as the revised designs, in addition to some combination first day covers. Unitrade prices most of these at between five and fifteen dollars per cover, for the most common cachet. It would be nice to see a complete listing of all the know cachets from the well known cachet makers of the period.
Offsets and Other Varieties 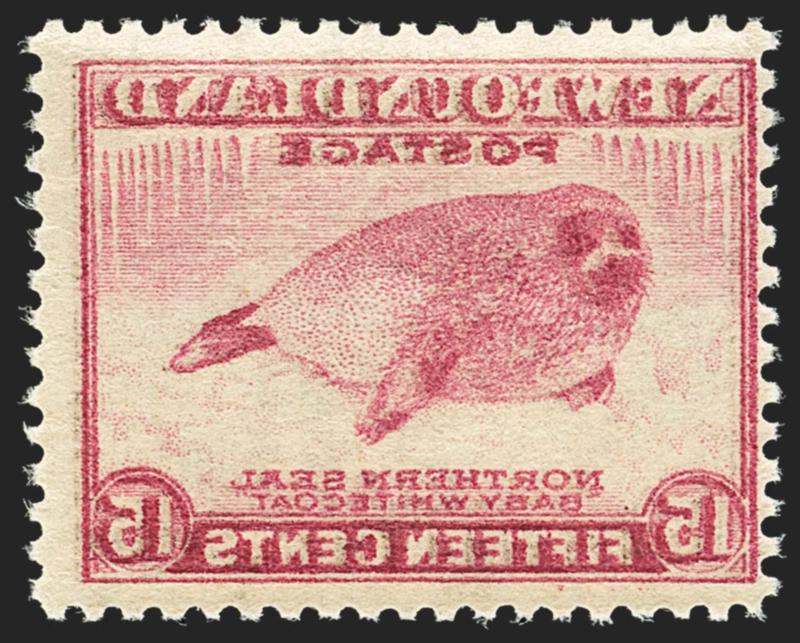 A very large number of offsets exist on this issue, especially on the Waterlow printings. As shown in the above scans, the images are very strong, being nearly complete designs, as opposed to feint shadows. On the Perkins Bacon printings, the 2c green die 1 is the only stamp known with these offsets, but on the Waterlow printings, the 2c, 3c, 5c, 10c, 15c, 20c, 24c and 48c can all be found with offsets similar to those shown above.

Two stamps in this series are known with double impressions: the 24c Bell Island Perkins Bacon printing, and the 5c Waterlow printing shown above, As you can see from the scan, they are quite spectacular. Both are rare, though the 24c is the most valuable, listing for $2,400 in Unitrade, for a very fine mint hinged example.

Perfins
The stamps of this series can also be found with private perforated initials. The most commonly seen are those for Ayre & Sons, which was a major department store chain in Newfoundland at the time. The scan shows the 4c carmine red with the Ayre perfin. My understanding is that most values exist, and the perfin also exists backwards, doubled, etc.

The 2c original design King George V stamp is known bisected and used from Curling. It is scarce, but very modestly priced in Unitrade at $100 on cover.

This concludes my coverage of this very interesting and potentially challenging issue. In 1937, Newfoundland took the designs of the higher value stamps and used them to produce an extended commemorative set for King George VI's coronation. Because the designs of this set mirror the Resources issue so closely, some collectors could argue that it is really part of this issue. However, I consider it closely related, but separate. It will be the subject of next week's post.