The Quebec Tercentenary Issue of 1908 - An Overview

In 1908 Quebec celebrated the 300th anniversary of its settlement by the French. It was decided that a commemorative stamp issue was in order. So plans were made to issue a set of stamps that would contain all the major denominations in use up to the 20c. Since plans were already afoot to issue a 50c purple for the Edward VII issue, it was not necessary to produce a 50c value for the series.

Each stamp featured a scene from the early history of Quebec, members of the royal family, or a famous historical figure connected to the period. The stamps were issued on July 16, 1908 and were printed by the American Bank Note Company of Ottawa, which later became the Canadian Bank Note Company in 1923. The stamps were designed by Jose Antonio Machado. The vignettes were engraved by four different engravers, three of whom were new to the Canadian stamp engraving scene:

Edward Gunn went on to engrave many of the later King George V issues, while Elie Timothee Loizeaux, to the best of my knowledge was not involved with any more Canadian stamp issues after this one. This was the last set that Charles Skinner was involved with, and Robert Savage went on to engrave the vignette for the Admiral issue.


The stamps were printed in sheets of 100 stamps.Very few intact sheets have survived the past 108 years and even plate blocks and multiples are very scarce.

The Stamps, Designs and Quantities Issued. 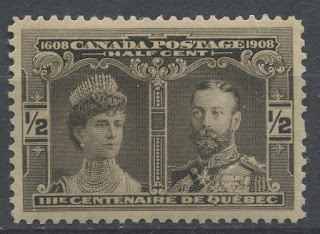 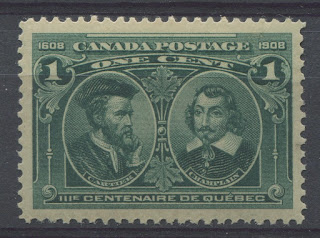 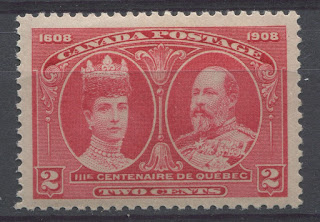 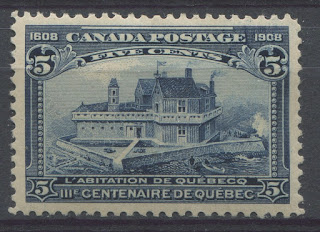 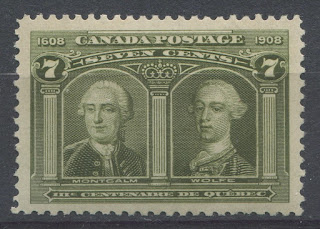 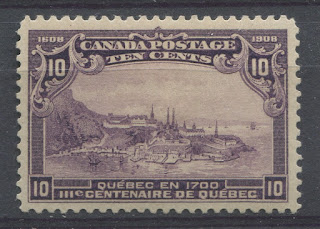 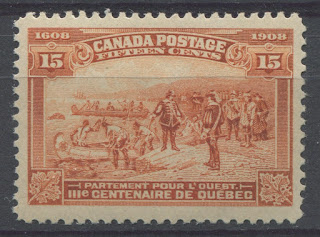 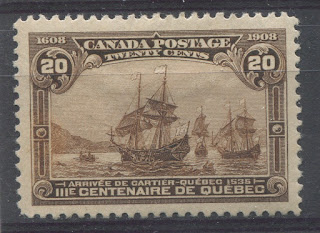 20c Dark Brown - Cartier's Arrival
304,200 issued.
Points of Interest
Given that this is a commemorative issue that had a relatively short life, the scope that it affords a potential specialist is less extensive than for a definitive issue like the Edward VII issue before it, or the Admiral Issue that follows it. However, this should not be a deterrent, as it still affords plenty of scope, and many will find that it is just the right amount of scope for them, without becoming too overwhelming. The main points of interest to collecting this issue are as follows:
I will now discuss each of these briefly and my subsequent posts will examine each of these aspects in more detail than I will do here.
Shade Varieties
Although very limited, there are variations of the shade on each and every stamp in this set. In working with the stamps so far, I have seen the most variation on the 1c blue green, and 10c violet and the least variation on the 1/2c, 5c and 20c values. However, most stamps in the series have between 2 and 3 shades each.
Paper Varieties
The paper used for this issue was a vertical white wove. Occasionally, the 1c and 2c are found on toned papers that appear to have been produced this way rather than being affected negatively by climate and age. The main difference that I have noticed in the papers used on this issue has to do with the appearance of the mesh as seen from the back of the stamp:
Whether or not you consider such differences to constitute collectible differences or not is a matter of personal preference. The thickness of the paper is generally uniform, being 0.0035-0.004" thick, so the standard stamp catalogues completely ignore any differences in paper on these stamps. However, for those of you so inclined, the above differences can be collected on each value of the set.


Cancellations and Postal History
Due to their large size, these stamps are ideal for the collector who wants to specialize in town cancellations. This will prove to be especially challenging on values above the 2c, but the 1c and 2c stamps will be plentiful enough to provide the specialist with much scope.
Local covers and postcards are common, so the 1c and 2c values are not difficult to collect on cover. The 1/2c value is most often seen used in multiples, rather than to pay the printed matter rate as was intended, so that single use covers of this value are quite rare and desirable. The high values are all scarce on cover and forming a collection of destination and rate covers will prove to be a challenging and rewarding pursuit.
Proof Material and Imperforates
As with all other Canadian stamp issues of this period, there exists a range of die proofs and essays, all of which are very rare and valuable, and the stamps also exist imperforate, both with and without gum. The two issues of imperforate stamps are separate printings, as evidenced by the fact that the shades of colour are different on each one. They are all similar in price to other material like this from this period. What is nice about this issue is that none of this material will cost more than $1,500-$3,000 per item, so those collectors whose budgets max out at that level can still choose this issue as their speciality and stand a chance at completion over a long period of time.
Re-Entries, Misplaced Entries and Cracked Plates
As with the prior Edward VII Issue, the 1c and 2c values, which were printed in much larger quantity than the other values are found with cracked plates that manifest as fine horizontal hairlines running across the stamps. In addition to cracked plates, one can find misplaced entries on the 1c, and re-entries on the 1/2c, 1c, 2c and 20c. Ralph Trimble, the leading specialist in re-entries  details these very clearly on his website:
http://www.re-entries.com/quebecterc.html
That concludes my overview of this beautiful and challenging issue.