The Imperforates, Experimental Coil Stamps and Booklets of the 1903-1911 King Edward VII Issue

In this post I wish to deal with three more aspects of the Edward VII that contain some very rarely seen material that will challenge a specialist of this issue for decades to come. One of those aspects is the experimental coil stamps. This was the first issue to feature such experimental material, with the first regularly issued coil stamps appearing in 1913 with the Admiral Issue.

It has been suggested in a 1953 BNAPS journal that it was the experimentation with the 2c coils that led ultimately to the production of the 2c imperforate stamps that were issued to the public. Most experienced collectors are already familiar with the fact that the 2c comes in an imperforate pair that is not particularly expensive and can be readily obtained in either mint or used condition. However, in the past several years, Unitrade has begun to list other versions of the 2c imperforate that were not issued to the public, and consequently are quite rare and expensive.

Finally, this is the second issue to feature a 25c booklet containing two panes of 6 of the 2c stamp and that sold for 25c. Like its Numeral Issue cousin, this booklet is very rare intact, and even a full booklet pane from the booklet will easily sell for over $1,000.

An article in the 1953 issue of BNA Topics, suggests that the experimentation in the production of coil stamps began in about 1910 and lasted until the Admiral coils were issued in 1913. The above two images show the first two such types of coils that were produced by the American Bank Note Company of Ottawa from surplus sheet stock held by the Quebec City post office. The coils were made by pasting sheets of stamps together with the paste-up appearing between every tenth stamp. These were produced for use in new vending machines that had just been ordered from England. Most of the strips were precancelled as shown on the 2c with the Ottawa roller cancel. Because the only way to tell these apart from regular sheet stamps is from the paste up between the stamps, it is quite possible to have a small strip of less than 10 roller cancelled or pre-cancelled stamps that is actually from these experimental trials and not know it. So it is important to check any vertical strips of either pre-cancelled or roller cancelled stamps very carefully, or consider submitting them to V.G. Greene Foundation for a certificate.

The 1c and 2c stamps are found with the following roller cancels and pre-cancels:

These strips are generally very poorly centered, and Unitrade only lists them in VG condition, with a premium for fine. This illustrates why it is important not to be too overly fixated on superb condition if your goal is to cover a classic issue like this in all its aspects: because some of the material simply does not exist in such condition.

The second group of coils were made privately by the makers of various vending machines with the permission of the Canadian Post Office. They were supplied with imperforate stock of Type II 2c stamps like the one shown above. There were three different types of separation that Unitrade lists:


There were also strips that contained V notches that are otherwise completely imperforate, as well as vertical strips that were perforated 12 horizontally. Neither of these are listed by Unitrade. The reason, I presume, is that they are too easily faked either by cutting notches in a strip of cheap Type II imperforate 2c stamps, or by trimming the perforations off a vertical strip of regular perf. 12 2c stamps.
The first types without the actual perforations, but with just the roulettes were produced by the United States Automatic Vending Co. of New York City. The perforated versions were produced by Messrs. Heiman & Zorke for use in the U.S. Auto vending machines.
The fact that these were all made with type II imperforates suggests very strongly that the Post Office printed the 2c imperforate type II stamps from plates 13 and 14 for use in these trials and only when the trials were over did they decide to sell them to the public. 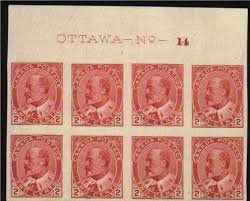 For the longest time, the standard Canadian stamp catalogues like the former Lyman's only listed the publicly available imperforate pairs of the 2c carmine-rose, which were type II. For that matter, they only listed type II sheet stamps as well. About 10 or 15 years ago, when Unitrade began to distinguish between the types I and II, they also began to list the type I imperforates, which were not issued to the public and are quite valuable. 400 of these were issued from plates 1 and 2 and none of them had any gum. In addition to this:

There are some implications to these facts: firstly, the types are not well known or understood outside of Canadian philatelic circles, as I regularly see 2c type I sheet stamps offered for sale by US sellers for the same prices as the much more common type II. So if you see an imperforate pair that is being sold without gum, check the type, as it could well be the rare type I imperf, which was not issued without gum. I am not completely sure as to whether the red lined and black lined imperforates are type I or type II, as I have never seen a pair before. However, I presume that they are likely type I as the type II imperforates were supposedly only printed from plates 13 and 14. If anyone knows differently, I would appreciate it if they can come forward and let me know.
In addition to the above, four pairs are known of the type II sheet stamp which are imperforate horizontally.
I have not seen any re-entries, misplaced entries of varieties of note on these imperforate pairs. There are some very minor shade variations, but most are just a deep carmine-rose.
The Booklets 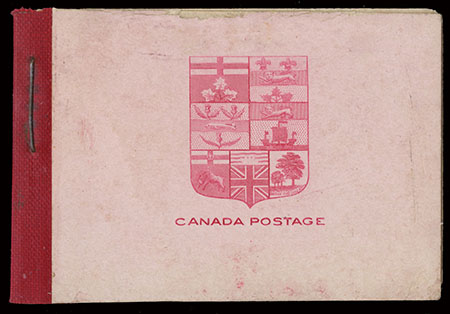 883,333 booklets like the one shown above were issued on July 1 1903. They contained 2 panes of 6 2c carmine-rose type II stamps separated by wax paper interleaves. They are exceedingly rare intact and even the one shown above, with its light soiling on the cover sold for several thousand dollars.

The panes that went into these booklets were printed in sheets of 28 panes of 6 that were laid out with one set of 14 panes inverted in relation to the other 14. This fact has given rise to one of the rarest, and most expensive items in modern Canadian philately: the imperforate tete-beche booklet pane strip shown above. It comes from the only surviving imperforate sheet which was given to the postmaster for approval. This one, which is the better of the two known strips sold for $35,000 in a Gary Lyon sale just a few years ago. So forming a complete collection of this issue in all its aspects is an extremely expensive endeavour despite the fact that the set contains relatively few stamps.

My next post will address some of the pitfalls associated with collecting this issue before getting into the postal history.