Today, I will cover the printings of the 6c black that were printed by the CBN. The CBN printed the coil stamps, which were issued in August 1970, and the sheet stamps that were first issued in 1972 and replaced the BABN printings. These stamps are all very easily identifiable by the stiffer paper used to print them, the tagging that was used on the tagged stamps and the differences in the die that was used to print the stamps. The CBN die is known also as die 1a and looks very similar to die 2, in the sense that the shading of the sky and background is even. However, the CBN die resulted in stamps that look less intense than the die 2 stamps. A closer look at the stamps reveals that the right frameline is not thick, like die 2, but thin, and the shading lines themselves are not as thick as the die 2 stamps.

The scan below shows the difference between die 1a and die 2: 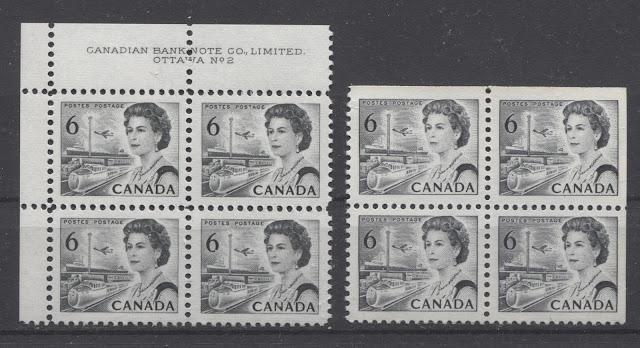 Die 1a is shown by the block on the left, while die 2 is shown by the block on the right. If you look at the left and right framelines you can see that they are thinner than the framelines on the die 2 stamp shown on the right block. also, the general intensity of the shading lines is lower on the die 1a, even though the lines are unbroken and complete.
The remainder of this post will look at the printings of these stamps in detail
The Untagged Sheet Stamps - Unitrade #460f, fi and xxi
Paper Characteristics Other Than Fluorescence

Unlike the paper used by the BABN, the paper used by the CBN is a vertical wove rather than a horizontal wove. The colour of the paper is very light cream when viewed against a stark white background, but is quite white when compared to the standard dull papers used by the CBN for the other values of the series. The paper also shows a light horizontal ribbing on the paper surface, that is often only visible when you view the stamps are viewed at an oblique angle to the light source. Under magnification, the paper surface appears completely smooth, and is lightly coated.

Unitrade lists this stamp as existing only on low fluorescent paper. I do think that is basically correct, but like most values in this set, there are several different varieties of low fluorescent paper, that differ in terms of the overall colour under UV light, as well as the presence and concentration of fluorescent fibres embedded in the paper.

The first two are shown in the picture below: 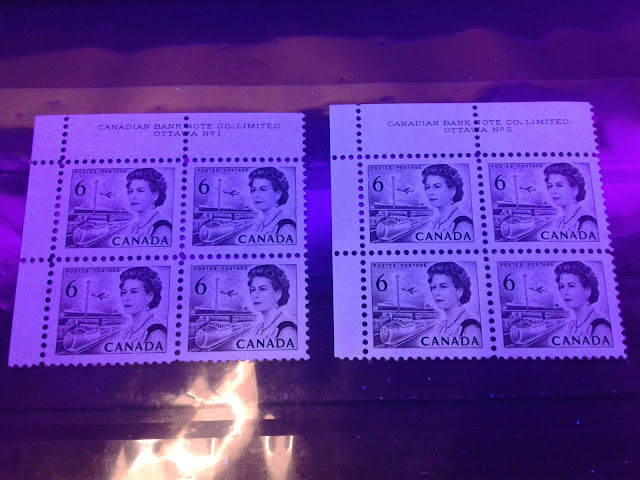 The next picture shows the next two varieties: 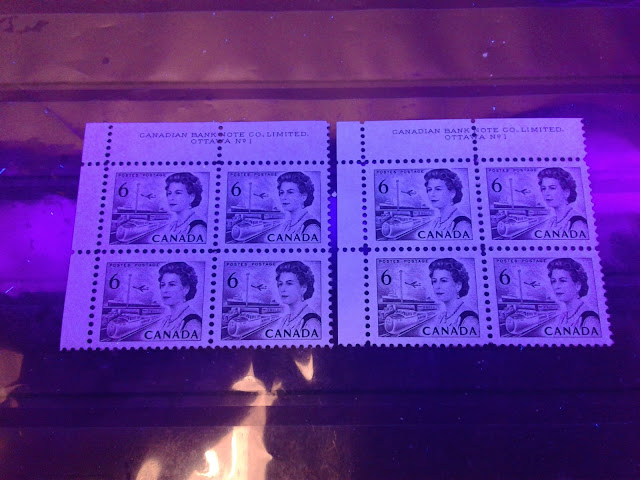 So, the main differences between these papers is thus their overall colour under UV light. So, all told, I have found four varieties of paper fluorescence on the untagged stamps.

These stamps display a complete uniformity of colour, with the ink being a deep greyish black. The colour of course stays the same under UV light.

In contrast to the comb perforations found on the BABN printings, these stamps are line perforated, just like the other CBN stamps. The gauge measures 11.85 on all the stamps and blocks that I have examined. This conforms to my expectations, as these stamps were issued in 1972 after the earlier 11.95 gauge machines were withdrawn. The standard catalogues do refer to this as 12, but it is actually 11.85 on an instanta gauge.

The gum on these stamps is a white, smooth PVA gum that has a satin sheen.

These stamps exist precancelled. According to Unitrade, the paper type on which these are found is also low fluorescent. I only have a very limited number of blocks of the precancel from which to work, and these are all the first variety of paper: the greyish one, but with a few medium fluorescent fibres in the paper as well as the low fluorescent ones.  I have also found a similar variety of paper, but with a greyish white appearance under UV. This raises the question as to whether these papers are other varieties of low fluorescent paper that can be found without the precancel, and whether or not the other varieties of low fluorescent paper can be found precancelled as well. I suspect they can, and will update this post accordingly, as I find new varieties.

Printed on the Gummed Side

This stamp exists printed on the gummed side. It is not nearly as rare as other printed on the gummed side stamps are, listing at a mere $25 in Unitrade. The paper that I have found this on so far is the low fluorescent ivory paper discussed above. It is an easy stamp to mistake for an uncancelled used stamp as the printing quality is so clear. But it can be quite readily be identified by the amount of surface sheen, which is much more than for a normal mint stamp. The scan below shows the sole example in my stock: 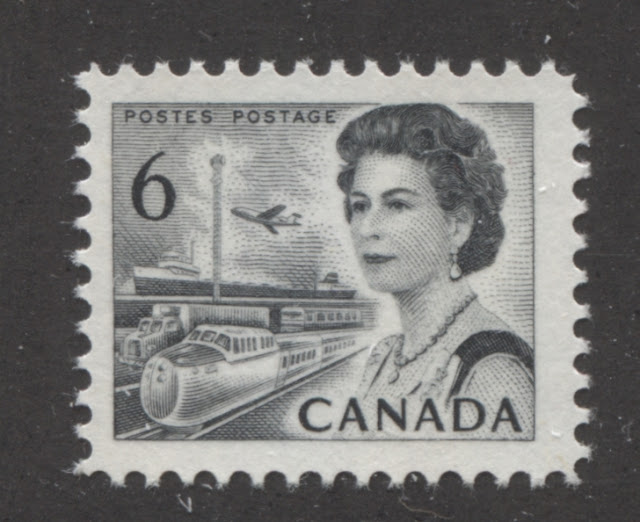 The tagged stamps exist on two basic varieties of paper, ignoring the fluorescent properties. The first is the horizontal ribbed paper that I have already described under the untagged stamps. The second type of paper is the same in all respects, except that it has an entirely smooth surface, and no ribbing whatsoever.

The paper fluorescence levels on the tagged stamps differ quite markedly from the untagged stamps and differ depending on whether the paper is smooth or ribbed.

Unitrade lists the ribbed papers as existing with three levels of fluorescence:

In addition to the above, I have identified a low fluorescent flecked paper, similar to the smooth paper that is found with 4 mm Ottawa tagging. This is unlisted in Unitrade, and is definitely ribbed paper, with 3 mm Ottawa tagging. The picture below shows two very similar varieties of this paper: 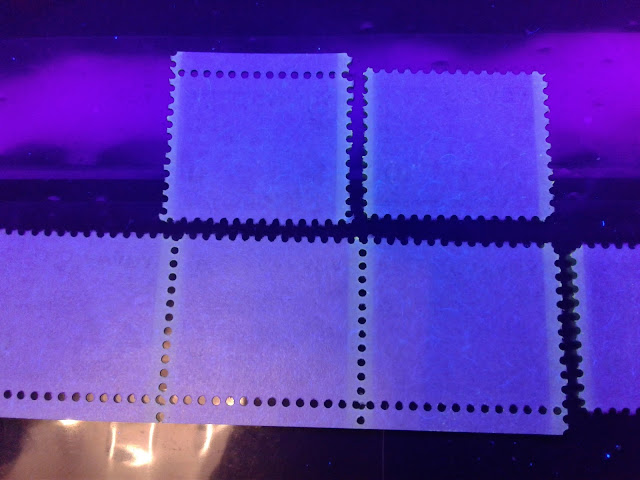 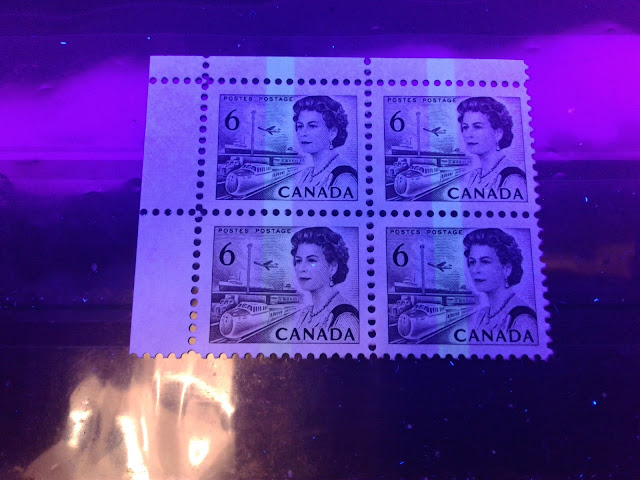 This paper is the same as the low fluorescent greyish white paper that I looked at earlier under the untagged stamps. Two of the three blocks that I have of this printing are on this paper. I do have another block on a greyer paper as well. The next picture shows the subtle difference between the two: 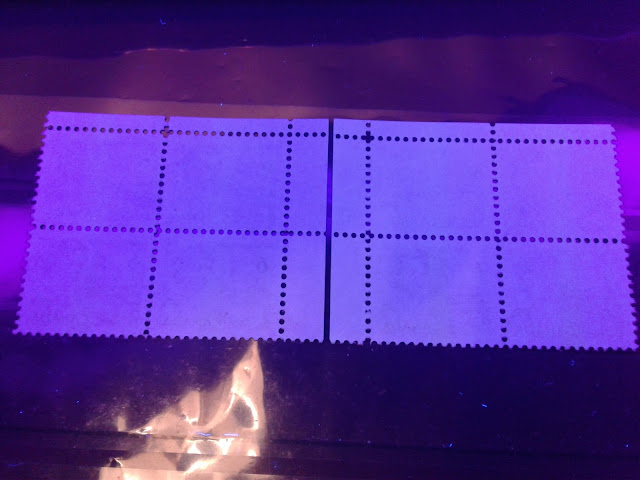 The next block below is also printed on the exact same paper: 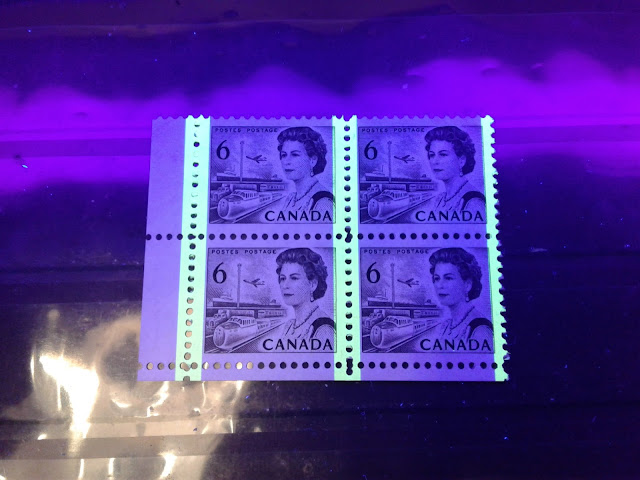 This is the 4 mm Ottawa tagged printing on low fluorescent paper, which is listed in Unitrade as 460fpiv.

The next picture shows the medium fluorescent paper, with 3 mm Ottawa tagging: 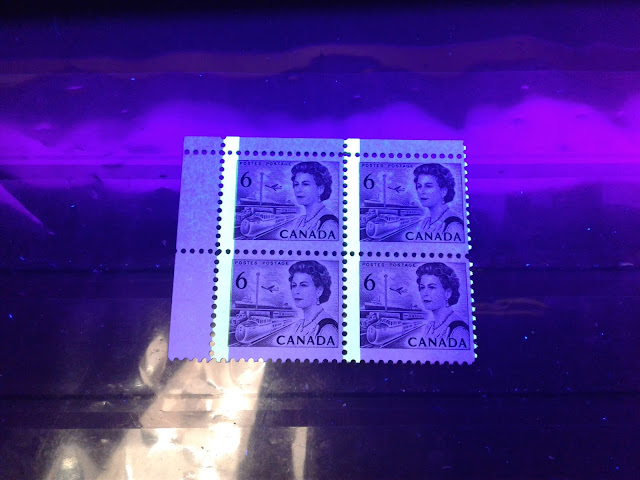 The picture above doesn't do the greatest job in showing the true appearance of the paper. However, the next picture, taken from the back, should show it a little more clearly: 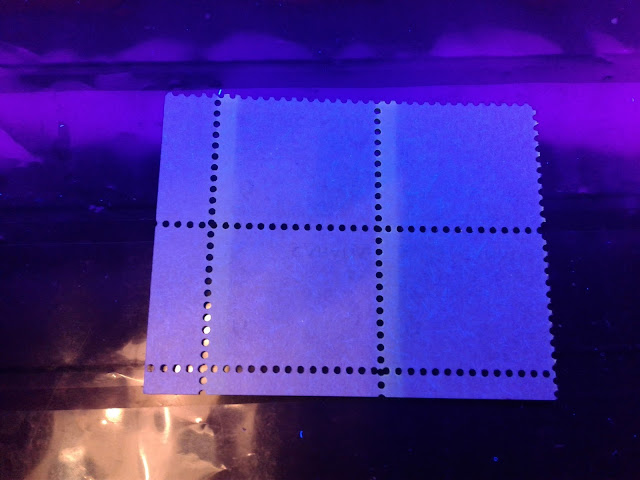 The next picture shows both the front and back of a block of the precancelled stamp with 3 mm Ottawa tagging: 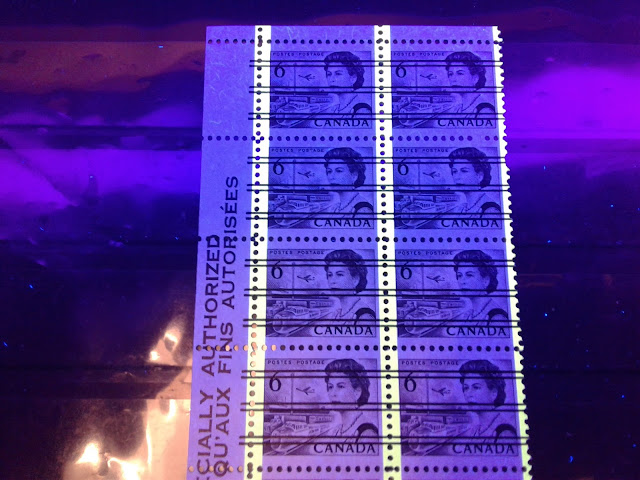 Here is the same block as seen from the back: 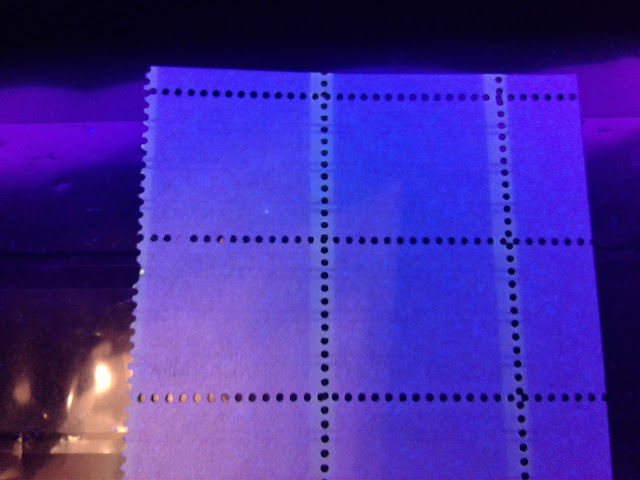 You can hopefully see the brighter medium and high fluorescent fibres standing out. The overall appearance of the paper is a fluorescent bluish colour, but that is wholly attributable to the fibres. The actual fluorescence outside these fibres is dull fluorescent greyish.

So, there are at least 6 different ribbed paper types.
Smooth Papers

The smooth papers are listed in Unitrade as existing with four different fluorescence levels: 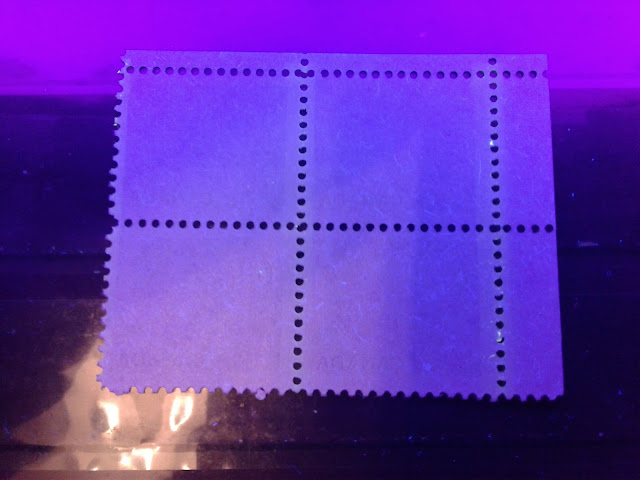 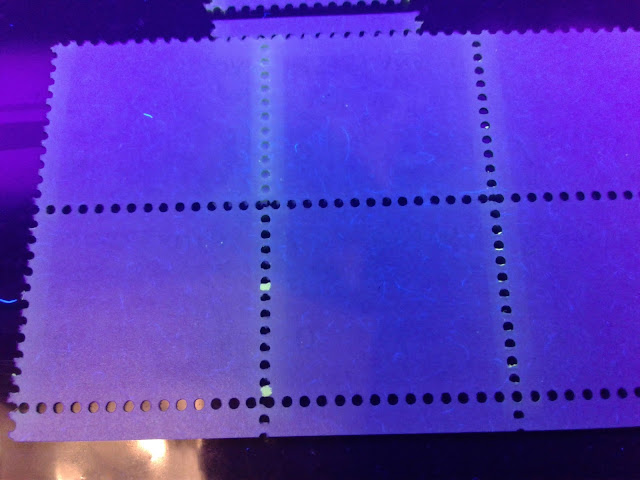 As you can see, it is very similar to the paper shown above, but it is a little more whitish and there are some brighter high fluorescent fibres present in the paper.

The picture below shows examples of both papers: 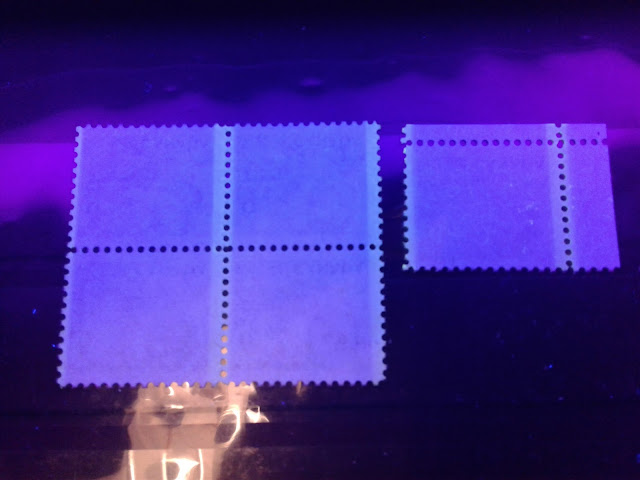 The ink used on the tagged stamps is also a grey black and shows no significant variation in shade.

The gum on these stamps is the same as that found on the untagged stamps: a smooth, white PVA gum with a

This stamp exists both Winnipeg tagged and with two types of general Ottawa tagging, one measuring 4 mm wide, and the other measuring 3 mm wide.

The Winnipeg tagged stamps were tagged with 4 mm bars that ran down the centre of all stamps in the sheet, and are spaced 20 mm apart in the horizontal direction. The bands appear light yellow in normal light, and glow yellowish white under UV, as shown in the following picture:

The picture below shows the appearance of the 4 mm general Ottawa Tagging: 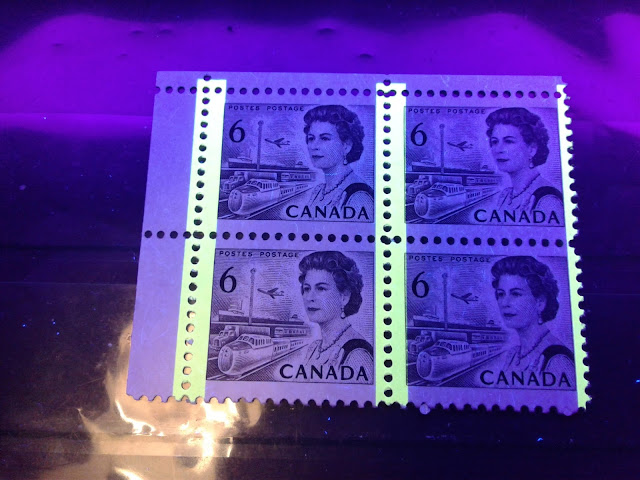 As you can see, the tagging bars are a very bright yellow under UV, that contains a slight tinge of green. The bars are 20 mm apart.

Finally, the next picture shows the 3 mm Ottawa tagging:

In this example, the bars have been shifted to the right so that the right edge of the block has almost no tagging visible at all. The bars glow the same bight yellow as the 4 mm tagging. The spacing between tagging bars this time is 21 mm, rather than 20 mm.

According to Unitrade the precancels exist on three types of horizontal ribbed paper:

Unitrade is confusing because they do not specify the width of the tagging found on these stamps, even though they do so for the non-precanceled stamps. From what I have seen from the stamps I have examined, all of the precancelled stamps are tagged with 3 mm bars.
Unitrade is also confusing because I believe they are inconsistent in their descriptions of paper fluorescence. What they call medium fluorescent for the precancelled stamps, is in my opinion, really high fluorescent.
The high fluorescent paper is shown in the two scans below: 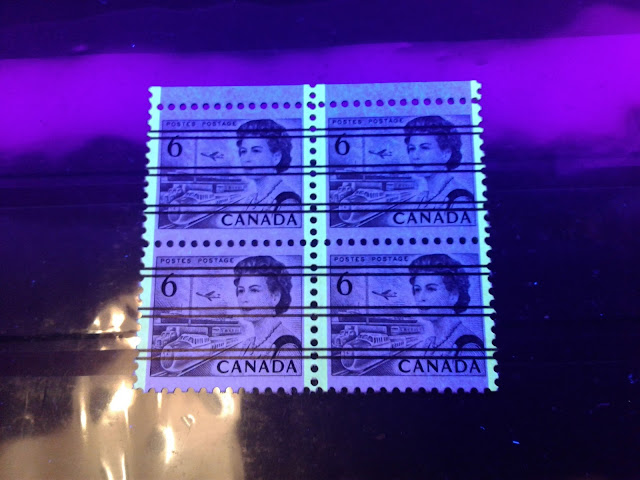 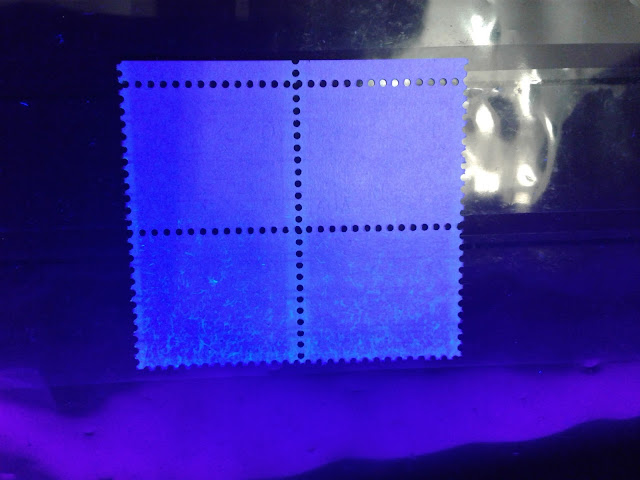 I have found three varieties of low fluorescent paper, all of which are quite similar, and are shown in the picture below: 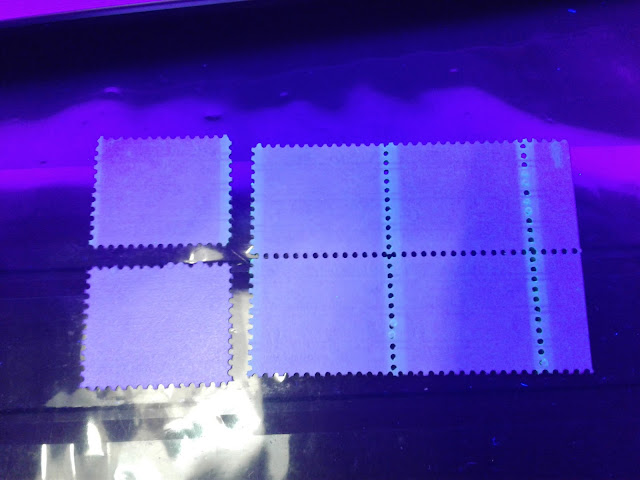 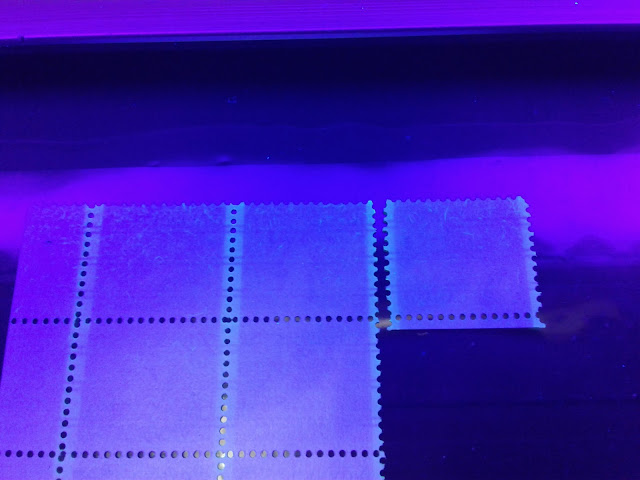 The paper used to print the coil stamps is a vertical wove paper that shows no visible ribbing on either the front, or the back. The printed surface is smooth, under magnification, and the paper is clearly lightly coated. The colour is very white, even when viewed against a stark white background. When held up to a strong back-light, the horizontal mesh pattern of the paper is clearly visible.

Unitrade lists this stamp as being printed exclusively on hibrite paper. Like many of the hibrite listings in Unitrade, there are actually variations in which some stamps are true hibrite, while others are really high fluorescent. The picture below shows both the high fluorescent and hibrite papers: 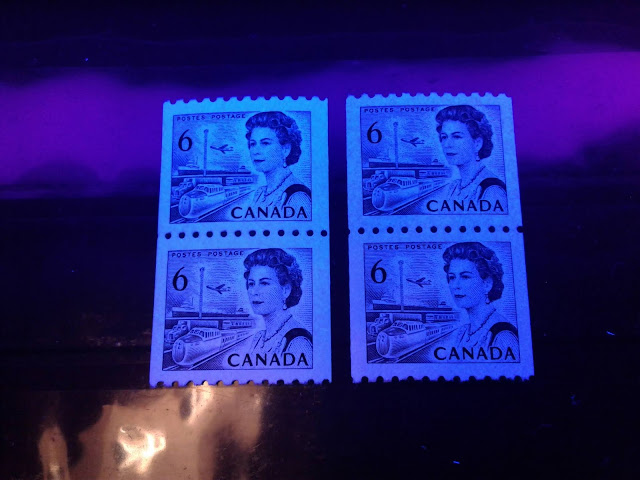 The true hibrite paper is shown on the left hand pair, while the pair on the right is the high fluorescent paper.

I have not found any variations in the shade of black ink used to print these stamps. The black ink used for the coils is a more intense black than the greyer black found on the sheet stamps.

These stamps were line perforated 10.0, like the other coils printed by the CBN.

I have found three types of dextrose gum on these coil stamps:

The pictures that I took below, show all three, distinct types: 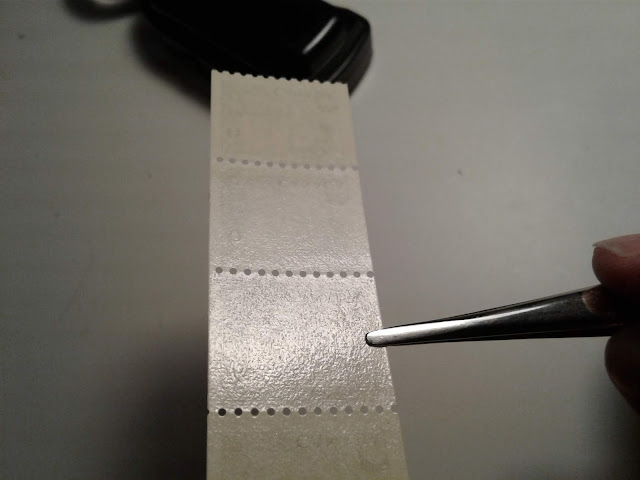 This is the smooth gum. Note the even appearance, without blemishes. 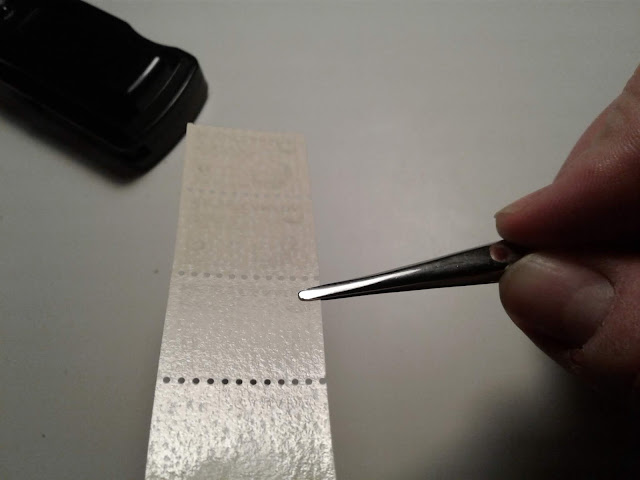 Here is the streaky gum. Note the regular, vertical pattern of blemishes on the gum. 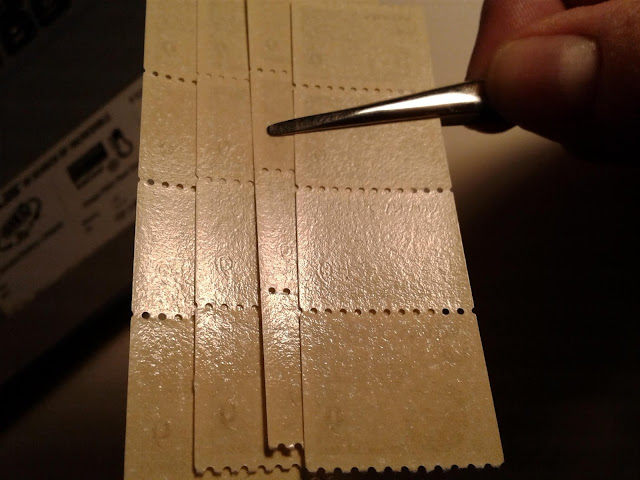 Here is the blotchy gum. Notice how it looks almost as if it was applied with a sponge. The thickness of the gum is not uniform and so the blemishes in the gum are random and neither arranged horizontally or vertically.

Like the other CBN coils, and the 6c orange in particular, this stamp was issued in rolls of 100 stamps, so there are no start, or end strips. There are jump strips that can be collected, though, like the 6c orange, the jumps are not as noticeable as they are on the other issues.

This concludes my discussion of the CBN printings of the 6c black. In my next post, I will look at the perf. 10 and 12.5 x 12 booklet stamps that were not from the mixed 25c booklets.
Filed in: 1967-1973 Centennial Issue