Today, I begin my series of posts dealing with the 5c value from this series. Unitrade's listings for this value until fairly recently were were lacklustre, and ignored many of the paper varieties that can be found on the dextrose gum sheet stamps, at the very least, and possibly some of the PVA gum sheet stamps. However, in recent years, they have added several listings so that they now list four levels of fluorescence for the untagged sheet stamps with dextrose gum, and two for the PVA gum stamps.

However, there are many more attributes that show variation on this value, the chief among them being the shades of blue on which the stamp can be found. They run the full gamut, from very deep, dull blues all the way to deep bright blues. Yet, for some reason, they are completely ignored by Unitrade. In addition, there are the usual variations in perforation and gum that can be found also.

This week, I will discuss the untagged sheet stamps in detail. The remainder of this post will start with the dextrose gum stamps, and will finish up with the PVA gum stamps. 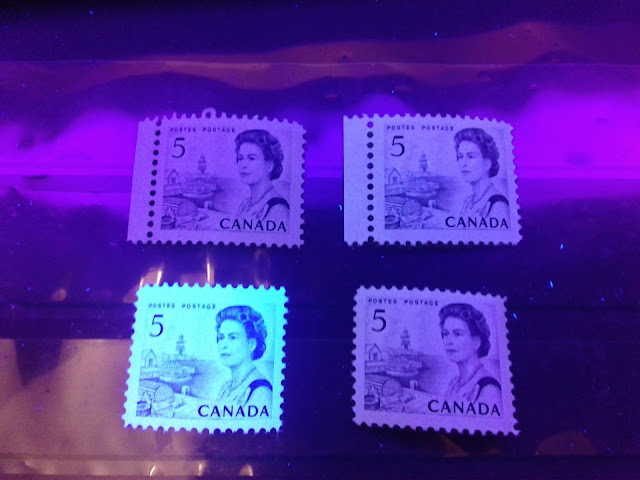 As we shall see, there are several sub-varieties of each of these four basic paper types, which will now be discussed in detail. 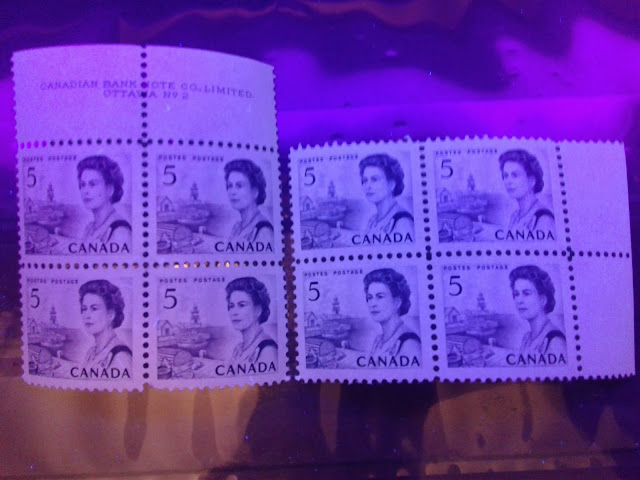 The paper of the block on the left is an ivory-grey under the UV light. The paper contains very few high fluorescent and hibrite fibres. If you look near the upper right corner of the lower left stamp, just to the left of the shed on the lower right stamp, and in the upper selvage tab, you can just see a few of these fibres. The paper of the block on the right is greyish white under the UV lamp and contains very few low fluorescent and medium fluorescent fibres. These fibres are not generally visible without the use of a loupe, there are so few of them.
Let's now look at the next three: 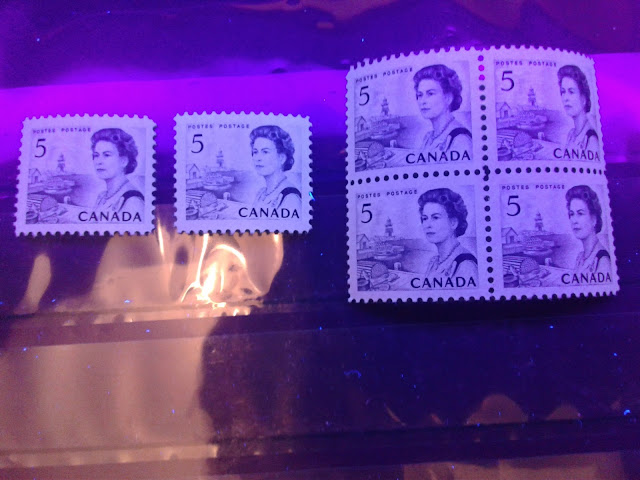 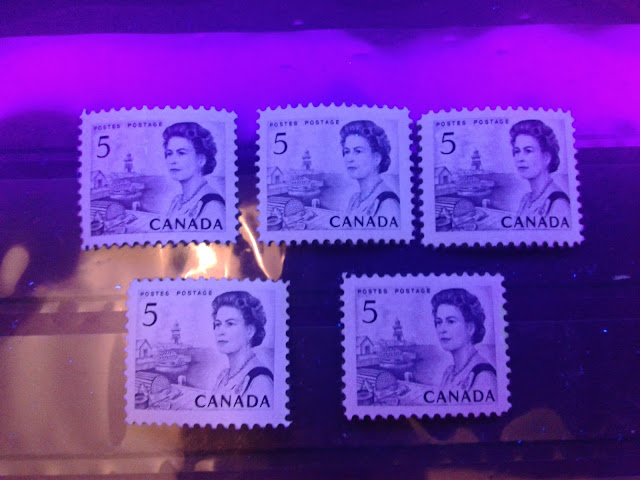 I have found two different types of non-fluorescent paper on this stamp. One is a pure grey colour under UV light, while the other appears violet under UV. The key characteristic of NF paper, it that it will not appear whitish at all under UV, but will always be a shade of grey, brown, dark blue or violet. 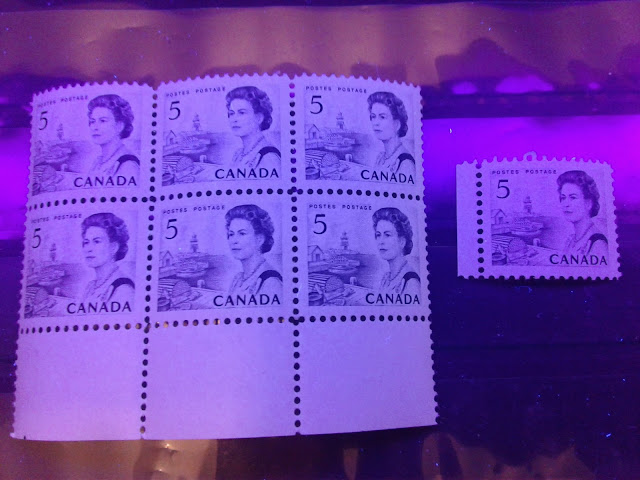 The first picture below shows the difference between dull fluorescent and low fluorescent paper: 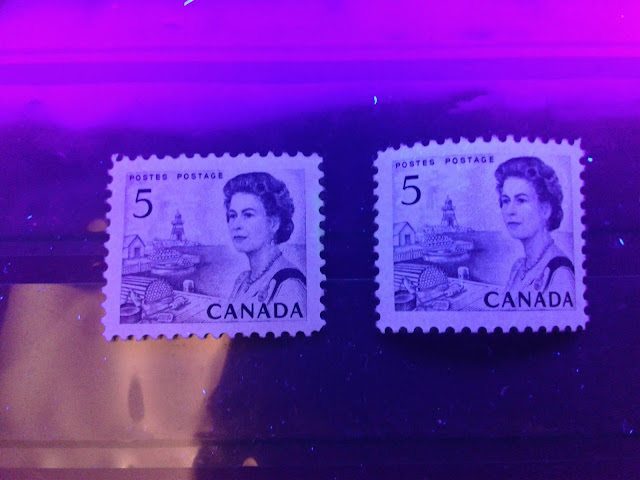 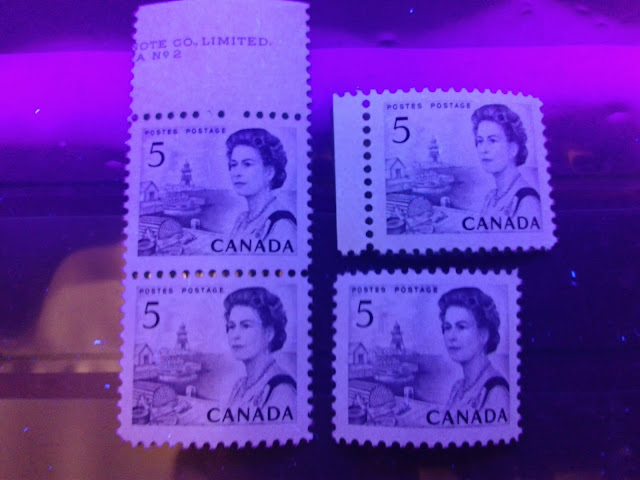 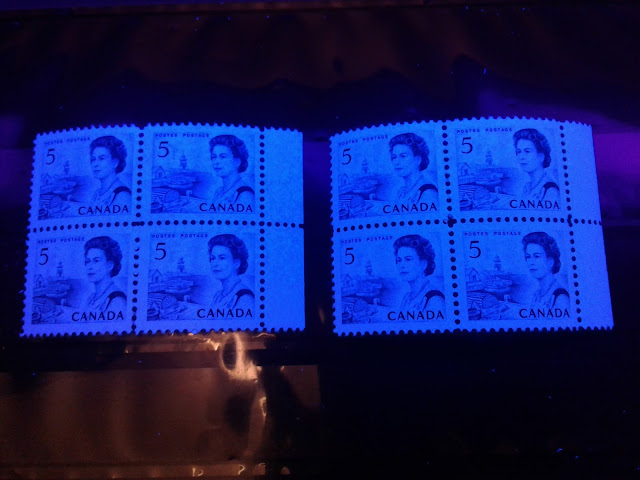 This picture shows the true hibrite paper on the left, and the high fluorescent paper on the right. Although you may have to look at the comparative pictures for a while to clearly see the difference, it is very clear when you compare the two papers within a larger number of similar stamps. 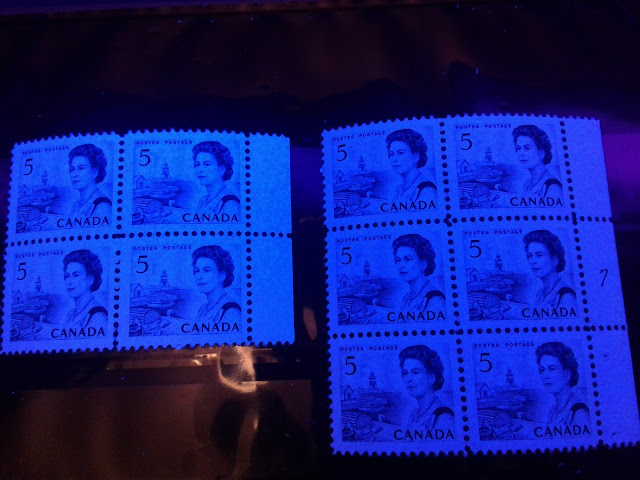 There are several different shades of the blue ink used to print these stamps. Some of these differences are quite obvious, while some are subtle.

Let's take a look at the first of these below: 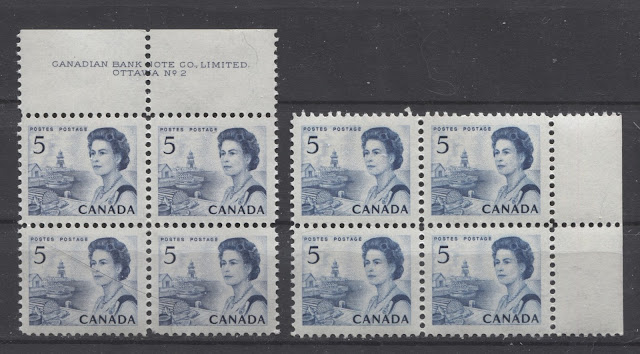 On the left we have the common deep blue shade, which is found on most stamps from the early printings. It is a near perfect match to the deep blue swatch on the Stanley Gibbons colour key. On the right is an example of the deep bright blue, which does not have a corresponding swatch on the Gibbons colour key, and is found on the later printings mostly.

Now, let's look at the next two:

These are both variations of the deep blue above, but are ever so slightly different. The left stamp is a little darker, containing a hint of black to the colour. It is actually very close to indigo on the Gibbons colour key. The stamp on the right is just a touch paler.

Now, we will look at two shades that are variations of indigo:

Let's look at another shade that is similar to the pale indigo above, but is slightly brighter: 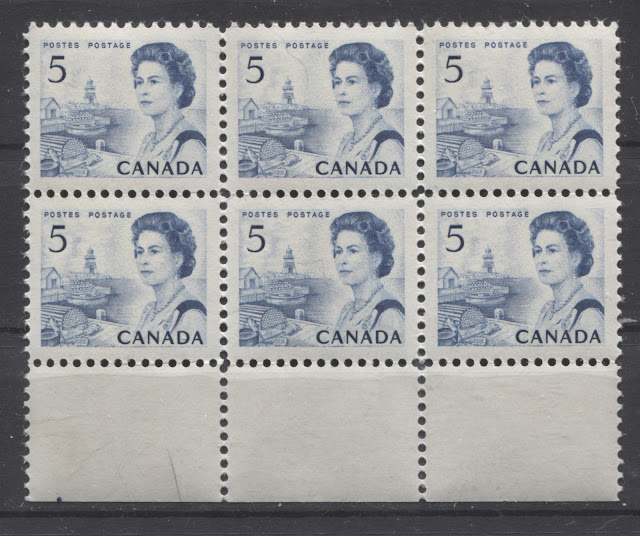 This shade is very similar to the deep blue in terms of its tone, but is slightly brighter. It is not quite as bright as the deep bright blue however.

Next, we have another bright blue shade that is similar to the deep, bright blue, but contains no greenish undertone: 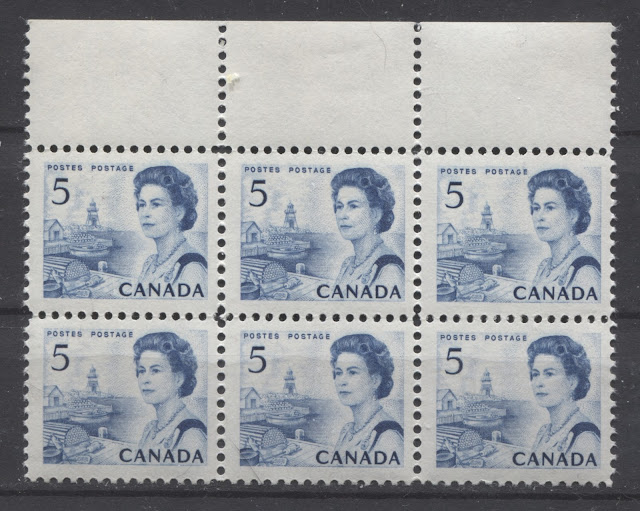 This shade is a more vibrant version of Gibbons's blue shade. I would simply call it the deeper bright blue shade, to signify that it is not as deep as the deep bright blue shown previously.

Next, we have another relatively deep blue shade, again, without any greenish undertone: This shade is the closest match I have to the blue shade on the Gibbons colour key. It is just slightly deeper, but the same general tone.

I have identified nine shades here. Although, some of these shades appear to be associated with certain printings, I would expect that the possibility that all of them can be found with most varieties of paper and gum is quite high.

Several kinds of dextrose gum can be found on the various printings of these stamps. The different types can be described as follows:

Unitrade lists a variety called the"line in 5". It is too difficult to see even on a 1200dpi scan, so I will not be able to illustrate it here. Basically it is a slightly oblique, very fine line that joins the top bar of the "5" to the semi-circular curve of the "5". It occurs on plate 3, position 11 of affected panes. According to a leading specialist in this issue, there is also another, similar flaw on the "5", except this time the line joins the top of the semi-circular curve to the bottom of that curve.

Unitrade lists the precancels on either dull fluorescent or hibrite paper. I would expect that the same range of fluorescence levels found on these papers should exist with precancels. My stock of precancels is fairly limited, so I cannot check this for certain. However, I can say that I have not found any examples of precancelled dextrose gum stamps on either the low fluorescent, or the non-fluorescent papers. So in this regard, Unitrade's listings would appear to be correct.

Four plates were used to print the dextrose gum untagged stamps. Determining the number of possible combinations of paper, shade, perforation, precancel and gum is complicated somewhat by the fact that some gum types and perforation measurements will not, likely exist with certain paper types. Based on my study of the stamps that I do have, the number of collectible single stamps is as follows:

In terms of plate blocks, the non-fluorescent paper is likely limited to plates 1 and 2. Plates 1-5 will exist with the dull and low fluorescent papers and the hibrite paper will exist only with blank blocks. Therefore, the possible numbers of plate and blank corner blocks that could potentially exist is:
The actual number of collectible variations is likely much lower, as there will be shades that do not exist with particular paper and gum types and so forth. However, a very fun project for a very focused philatelist is to see how many do in fact exist.

According to Unitrade the PVA gum stamps for this value first appeared in December 1971, though an exact date is not given. This is the same month as the 1c stamps with PVA gum and is 3-4 months earlier than for the other low values that exist thus.

The paper used to print these stamps is again, a vertical wove paper. However, there are two distinct types of paper found, ignoring paper fluorescence:

Both of these types appear to be associated with specific paper fluorescence levels. Therefore the number of different papers on which these stamps can be collected is determined by the paper fluorescence, and not the above characteristics. However, it is important to be aware of these attributes of the paper also.

Unitrade lists the paper of the PVA gum stamps as being either low fluorescent flecked, or low fluorescent without fibres. What is confusing to beginning collectors is that the basic colour of the paper under UV light often appears the same as many examples of the dull fluorescent and non-fluorescent papers. What makes these papers different is the inclusion of a much larger number of fluorescent fibres than the stamps with dextrose gum. The paper also often contains brownish woodpulp fibres that can only be seen under UV light. I call them woodpulp fibres, as they appear brownish under UV. 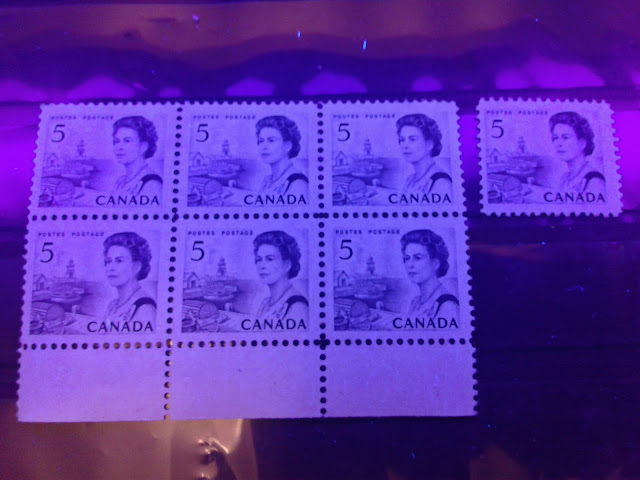 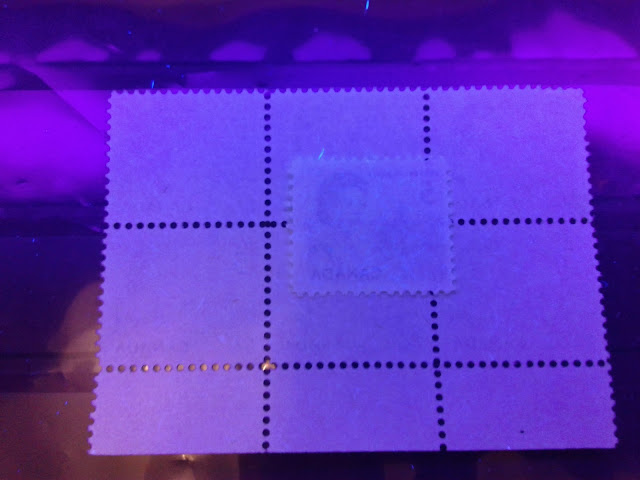 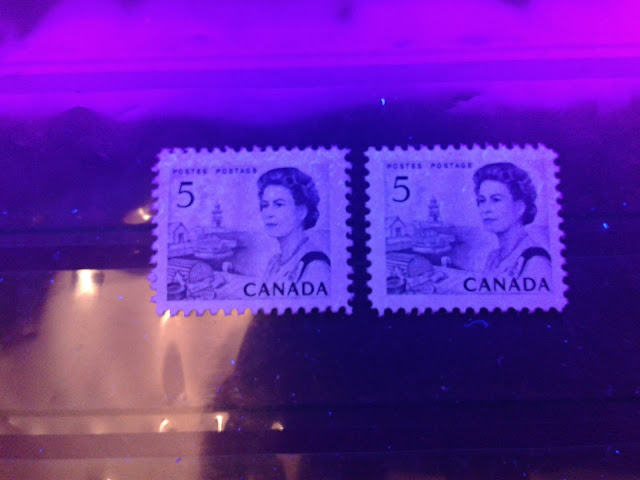 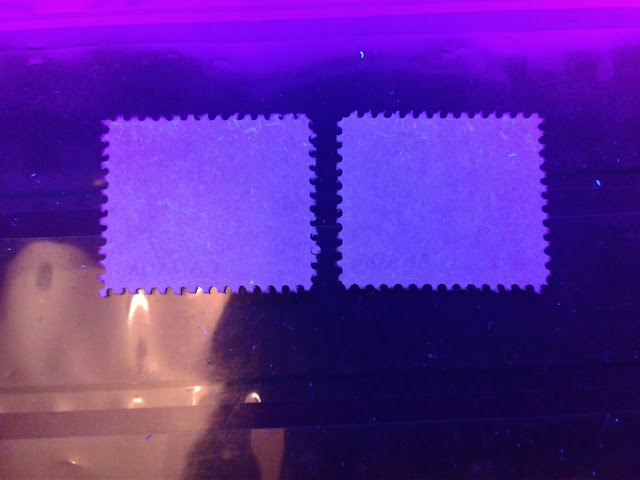 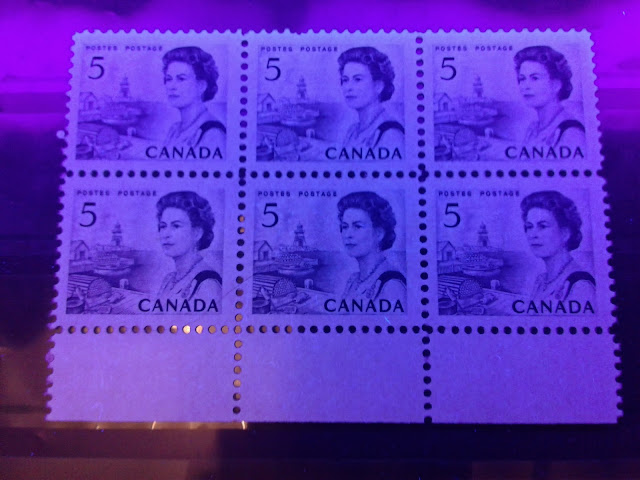 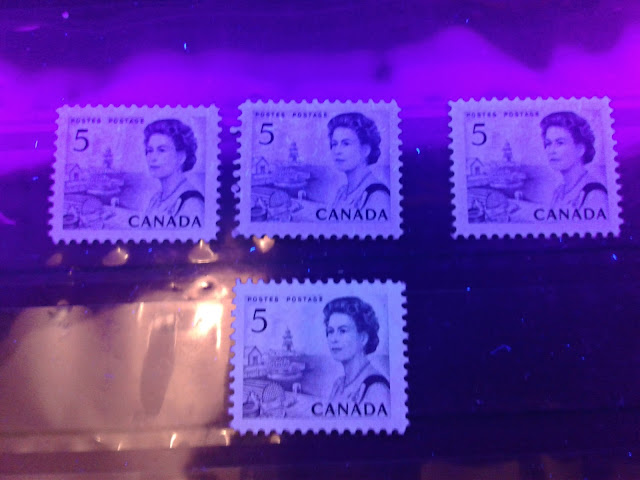 There do not appear to be nearly as many shades found with the PVA gum stamps as we saw on the stamps with dextrose gum. Gone are the extremes of the bright blues and the indigos and instead we have middle of the road, deeper blue shades. I have found 2 shades on the stamps I have examined so far:

There are two types of smooth PVA gum found on these stamps:

According to Unitrade, these stamps first appeared in December 1971. Accordingly, they should only exist line perf. 11.85, as the machines gauging 11.95 had been retired fully by 1971.

Only plate 5 was used to produce the PVA gum stamps. I identified 9 papers, 2 shades, 2 types of gum, a single perf, and precancels, which could exist with any paper or shade combination. So the number of collectible stamps, plate blocks and blank corner blocks could be:

So, much less scope here than with the dextrose gum printings, but still much, much more than the listings in Unitrade would suggest.
This brings me to the end of this week's post, and my discussion of the untagged sheet stamps of the 5c Atlantic fishing village stamp. Next week, I will look at the tagged sheet stamps.