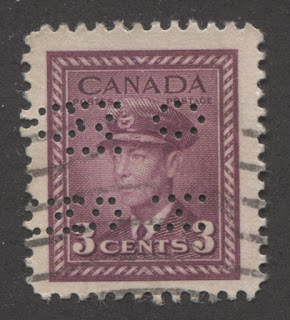 This was the first issue to feature both OHMS perfins and overprints in the same set.

The only perfin type in use at this point was the 4-hole type shown above.  However, there were three sub-types of the 4-hole type, the second of which came into use in 1942:


In addition to the usual 8 positions that all three of these perforated initials can be found in, the initials can also be found with various errors like double perforating, as in the example shown above. For those of you who have not read my other posts in which I talk about the perforated official stamps, the 8 different positions that I am referring to are:

Most of the values of this issue exist with all three types and probably in all eight positions as well. The only four values which likely only exist with the first type are those stamps which were only issued in 1942, and which had been replaced by 1943:


All values exist mint, and so far as I know, can be collected as plate blocks as well, though I am not sure which plates exist with these perfins. However, establishing which ones exist could be a fun and worthwhile exercise.

So to recap, with 19 basic stamps in the set, you could potentially have:

In late 1949, the Post Office Department decided to replace the method of production of the official stamps, from perforating to overprinting. An overprint forme was produced that applied the overprint "O.H.M.S." in a straight line across the 1c, 2c, 3c rose violet and 4c carmine. The spacing between the overprint between stamps in the horizontal direction was the same between all the stamps in columns 2 through 10, but was narrower between the stamps in column 1 and those in column 2. Thus one popular way to collect these, is in what is called "narrow spacing strips of three, which will show the normal spacing between the second and third stamps, and the narrower spacing between the first and second stamps. An example of a narrow spacing strip is shown below:

Note how the "S" on the left hand stamp is well to the right of the right "1", whereas on the other two stamps, it is to the left of the "1". In other words, the space between the overprints on the first two stamps is narrower than between the second and third stamps.

There also exists a "no period after s" variety that occurs on only one position, of the sheet. This variety is quite rare and desired by specialists. On this issue, it occurs on:

One final caution about these overprints is that in recent years, forgers have been faking them and using laser printing to overprint inexpensive sheets of stamps with the overprint. There are several things to be on the lookout for in this regard:

1. The ink of the originals should be shiny and jet black. Dull ink is very likely to have come from a fake.

2. The left vertical bar of the "M" is much thinner than the right bar. On the forgeries the left and right bars often appear thick.

Generally speaking the catalogue value of the basic 1c, 3c and 4c is low enough that fake overprints should not be too prevlalent. Most of the faking effort will have been confined to the 2c value, especially used, because mint and used list for almost the same price, as well as the narrow spacing strips and the rare plates.

In addition to the wide variety of first day covers that can be found for this issue, there are many ways that one can approach the collecting of the postal history:

As with all the definitive issues of this period, you can build very extensive and lovely collections of CDS town cancellations. They will be tricky to get on single copies of the values below 10c. However, many of these low values were used in multiples, and thus it is possible to collect them this way. There will be a lot of post offices that opened during the life of this issue that are closed today, or that closed while this issue was current, and you could focus on collecting those. Finally, each major province had a few thousand post offices each by the 1940's, so one collecting idea would be to get as many different Alberta cancels as possible on this issue for example. That would be a fun pursuit that wouldn't cost too much money, but which over time could become quite a valuable collection.

The postal stationery continued to use the same designs as the Mufti Issue. The major difference is that the dies, starting in 1943, incorporated the date, which makes them easy to distinguish from the earlier printings. Also, the colour of the 2c, 3c and new 4c envelope was based loosely on the colour of the stamps in the issue, so that the 3c is rose violet, the 2c is brown and the 4c is carmine-red.

The same range of #8 and #10 envelopes continued to be offered as before, and the postcards bore similar inscriptions to the earlier issues.

The envelopes issued during this period are all printed using the offset method, rather than typography, although there are two exceptions. The date "19" and "43" appear in the lower corners instead of "19" and "38". The veins inside the leaf are weak, falling short of the outlines of the leaf. There is also a very small dot inside the "A" of "Postage".

All the above envelopes also exist in the #10 size. There is a very rare error in which 3/4 of the design of the 3c purple, appears to be printed on top of a 4c red. This error is only known on the #8 size. The 4c orange and the 4c red #8 size exist with a constant plate flaw which resembles a hole in the king's forehead. Finally, the 3c light mauve exists watermarked "Victory Bond".
Post Bands and Wrappers
A 2c post band was issued in olive green, and this exists precancelled with three sets of horizontal bars. In addition, a wrapper was also issued in olive green, but this is not known precancelled.
Post Cards
There were a small handful of cards issued during this period: The BNA Proofs website lists no fewer than 58 proof items for this issue. Most are very expensive, being valued at upwards of $1,000 a piece. They can be summarized as follows:
So, at the average values of most of these, as well as how infrequently they come up for sale, you are looking at around $100,000 and a lifetime of searching in order to find and collect them all.

You can check them out in more detail here:

The last aspect of this amazing issue are the precancels. This is another area that can get quite complicated, especially when you get into errors. There are many styles of precancels ranging from three sets of parallel horizontal bars, to numbers within 2 sets of bars. Each municipality had its own numeric code assigned to it, and some of the smaller towns are quite scarce. The premier reference work for these, is of course the "Walburn Specialized catalogue of Canadian Precancels". However, I will give a brief summary here of which values are known precancelled, and how many different styles are known to exist. Please bear in mind though, that any given style can exist inverted, badly slanted, doubled, etc. These are worth a considerable premium of course, over the basic Unitrade values.  Also note that Unitrade generally only lists precancels in used condition, that is to say without gum. However, just as is the case with the later Elizabethan issues, it should, at least in theory, be possible to collect these in mint condition, with full gum, as well as in warning strips. A warning strip is a large block, usually either from the top of the sheet, or the sides. The selvage of these blocks would contain a warning message to the effect that the stamps were only to be used as authorized. The reason was that precancels were only sold by the P.O. to certain organizations or businesses, by the sheet, at a discount from face value. They were not available to the general public, and misuse by the public was actually illegal.

I have never actually seen any warning strip earlier than the 1953 Karsh issue, so unfortunately I cannot even describe what they would look like on this issue, if they do in fact exist.

The following values from this issue are known precancelled:

That brings me to the end of this very interesting wartime issue. It was a rather short post today, as the most detailed aspects of this issue were covered in the first two posts. However it is my hope, with these three posts, that at least some of you are inspired to consider issues like this for lifetime collections. The amazing thing about this issue is that the basic stamps are not too expensive, so that you can keep collecting and studying the material that you acquire, while you wait for the really rare proof items, coil varieties, full sheets and covers to become available. If you are thinking that there is not enough material in these early modern issues to challenge you, hopefully these last several weeks worth of posts will have laid those concerns to rest. In fact, these early modern issues starting with the Dated Die Issue in 1935 are really the only ones in which many of you have a realistic chance of being able to form truly complete "all-aspects" collections of. Even then, you will need deep pockets once you get to the proof material. But at least, the possibility exists, whereas it is not possible to form a complete "all aspects" collection of the Large Queens, or the Admirals. It is not possible, simply because a lot of the material originally printed simply does not exist anymore, in any condition. The best that collectors interested in those issues can hope to accomplish, is to form the very best collection ever formed, which will still be amazing. However, it won't be complete.
Over the next four weeks, I will complete the King George VI period with these posts:
Each of these should not require more than one post, and I have already written in detail about both the 1953 Karsh Issue and the 1954 Wilding & Industry Issues. Therefore, I will begin the Elizabethan period by looking at the commemoratives that were issued during this period, as well as some special posts about the paper used during this period as well as the perforations.
Filed in: 1942-49 War Issue, OHMS Overprints, OHMS Perfins, Postal Stationery, Precancels, Proofs