During the 1890's both Canada and the U.S. would release three sets of stamps containing stamps with extremely high face values. The United States released the Columbian Exposition Issue in 1893 to correspond with the 400th Anniversary of the discovery of America by Christopher Columbus, and in 1898 the Trans-Mississippi Issue was released. Both sets contained stamps that were over $1 in face value. To get an idea of how much money that was, consider that in 1893, one pound of tea cost 75 cents. Today 100 grams of tea is $5 or more so a pound would be almost $25. It was a lot for a stamp, so much so that very few of these high values were printed and even fewer were saved.

Canada's contribution to this was the Diamond Jubilee Issue, released on June 19, 1897. It consisted of 16 stamps, identical in design and with denominations ranging from half a cent to five dollars: 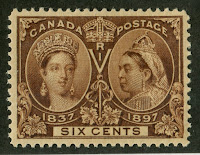 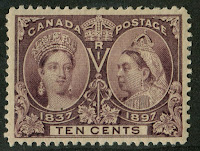 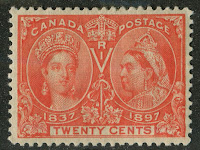 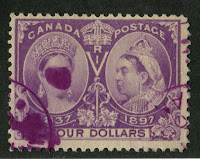 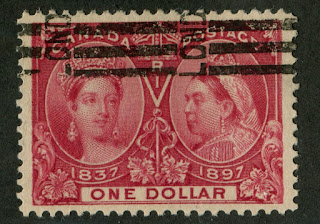 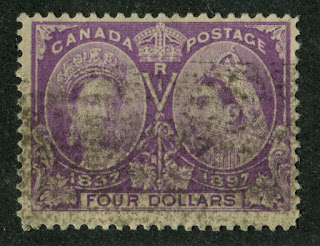 As you can see, the roller cancel consists of a row of several bars with the town name and often the office number reading upwards in between the bars. Both cancellation types were designed to completely deface the stamps to prevent re-use and were very effective at that. Generally speaking they have been less desirable to collectors over the years, although I believe that clearly struck and crisp rollers like the one above, that do not detract from the stamp's appearance are going to eventually become highly sought after as the study and collection of postal history continues to gather momentum.
Used multiples of any kind are not common on this issue. Although auction realizations at the moment do not seem to reflect their scarcity, I believe that this is another growth area just waiting to be explored by a patient philatelist.
Plate Flaws
The only listed plate flaw on this set occurs on the 20c and consists of a dash between the W and E of "Twenty". However, given that this variety was unknown 30 years ago, it is more than likely that there are other flaws that exist as well, particularly on the 1c, 2c and 3c, due to the number of plates used and the number of stamps printed.
Re-Entries
As stated in my post about Small Queens, a re-entry is a doubling of a portion of the design that occurs when the plates used to print the stamps are re-furbished by re-applying the transfer roll to those subjects on the plate that have worn. The doubling occurs because it is virtually impossible to re-apply the transfer roll in exact alignment with the older image. A misplaced entry occurs where the transfer roll is applied so far out of alignment that portions of the design can be seen in the wrong location on the stamps. 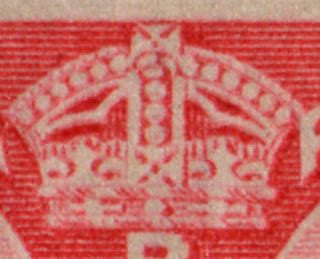 If you look at the curved lines below the pearls and the bowed lines below those you can just see traces of red ink inside the while spaces. This is weak doubling of the lines and is a weak re-entry. Some of these are very subtle and require a lot of patience to see.
Ralph Trimble, the ardent student of re-entries on Canadian stamps has found and documented re-entries on nearly every value in the set, and misplaced entries on the 8c. His study is still relatively new, so it is likely that many more exist than he has found. Generally speaking the areas of the design that seem to be affected are:
1. The letters in the inscriptions
2. The crown
You can still find large quantities of used 1c and 3c stamps for not a lot of money and could spend hours going through them looking for re-entries. Just a note of caution that due to the pale nature of the 1c ink that it may be difficult to see the re-entries on that value.
Plate Multiples
The plate inscriptions for the sheets appeared in the upper margins once on each sheet, and generally 2-4 stamps are needed to see the full imprint. So full imprint pieces are scarce to rare, and are generally worth double what the corresponding number of singles would be worth. The number of plates used to print the 1c through 3c values would have been considerable, given the quantity of stamps printed. Most other values should have only one or at most three plates. So aiming to acquire plate pairs, strips or blocks for all values in this set is another pursuit that could require a small fortune and a lifetime of patience.
Pitfalls
Because of the high catalogue value of nearly all the stamps in this set, there are a few issues to watch for that can separate the inexperienced from their money:
1. Forgeries
2. Re-perforated stamps
3. Hinge thins that are not noticed.
4. Dubious cancels on unused stamps
5. Re-gummed stamps and re-distributed original gum
Occasionally the dollar values are found in either lithographed or engraved forgeries. These are not too difficult to spot for someone who has some working experience with these stamps. The engraved forgeries, while good, just won't look right, while the lithographed product will lack the relief that the engraved stamps have. What can trip you up is that sometimes the forgeries have had fake roller or smudge cancels applied, and this can cause you to lower your guard. They still have some value mind you - just not as much as the issued stamps.
Collectors have become increasingly fussy about centering. In fact perfectly centered examples of the dollar values regularly fetch over $1,000 each and if mint never hinged can sell for as much as $15,000 at auction. The stamps were line perforated and occasionally one comes across stamps from the outer margins of the sheet that have exceptionally wide margins on one side. These were historically frowned upon by collectors so much so that many unscrupulous fakers resorted to re-perforating and reducing these margins to recreate perfectly centered stamps. How do you check for this? First take a ruler and place it over the protected stamp in such a way that you join the perforation teeth on both sides of the stamp starting with the edge you are checking. Next take a protractor and check the angle that the ruler is at from the horizontal. Generally, in the case of properly perforated stamps, the angle will always be 90 degrees. If the stamp has been re-perforated, the perforations will not line up exactly with those on the opposite side and the angle will be off. Another way to check is to take another stamp and line it up with the perfs to see if the resulting holes formed by the two stamps are a perfect circle. Unless the perforating pins were bent, they should be, and re-perforated stamps will give holes that are either not smooth circles or are odd shapes.
The paper on this issue is very soft and removing hinges is a very dangerous prospect because they will generally take some of the paper fires with them when you remove them. The resultant thins can be very hard to see and may often require watermark fluid. They do not make the stamps uncollectible - in fact I usually only lower the grade to the next lowest grade for a minor one. However, they do have an effect on the grade and if you are paying top dollar for the high values in VF condition, you should check them carefully for thins, especially if they are used. If you come across mint stamps with hinge remnants, my advice is to leave them alone. At least 50% of the time you will wind up damaging an otherwise fine or very fine stamp.
Many of the values in the set catalogue more or less the same price used as mint. This means that often when dealers or collectors came across stuck down mint stamps or mint stamps with very bad gum or stains the solution was to soak them and apply either a forged cancellation or a genuine posthumous cancellation to the stamp. Generally this was done right in the corner, so high values with corner cancels should be viewed most of the time as unused stamps unless you can establish that the cancellation ink is contemporary for the period.
Finally, there is the gum. There is some variation with the genuine original gum on this issue, but generally it looks like this: 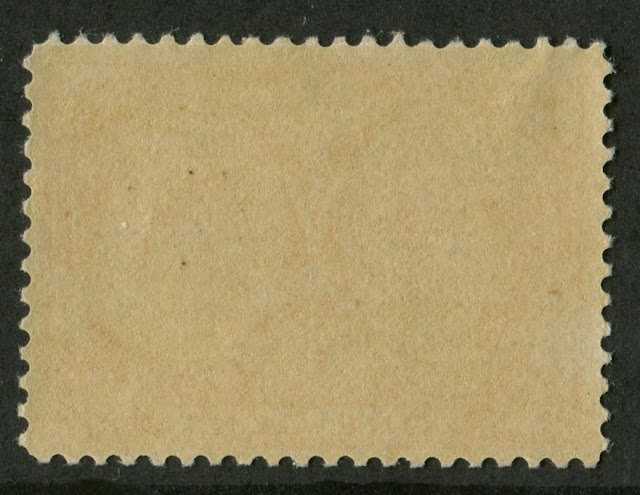 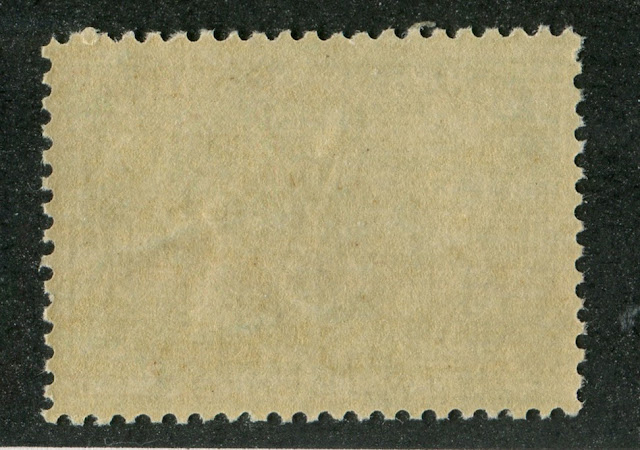 It is hard to see the difference between these two scans, but the gum on the top stamp is creamy, smooth and has a satin-like sheen to it. In other words, it is not very shiny, but it is not dull or matte either. The gum on the second stamp has a semi-gloss sheen - moderately shiny, but not extremely so. In both cases, the gum has a creamy, very light coffee with cream tone to it.
So if you see NH gum that is extremely crackly, extremely shiny, and colourless or very dark yellow, there is a good chance that you are looking at a re-gummed stamp, or at very least a stamp that has been sweated and had the gum redistributed to make it appear NH.
To check for re-distribution, look for irregular crack patterns in the gum and brush marks. Whenever gum from this period gets wet and re-dries it the crack pattern will be different from the undisturbed gum. To check for re-gumming, look at the fibres that protrude from the perforation tips. First of all they should be there, as when these stamps are separated from their neighbours, there will be some fibres that do not separate cleanly. As I said earlier, this is a soft paper, so there should be more microfibres present than usual, and none of these should have any gum on the end, as the gumming was done before the stamps were perforated. If you see globules of gum on these fibres or the perforation tips then it means that either the stamp is re-gummed or has been sweated. A sweated stamp still has value as an OG stamp, as the gum is original, but it is treated as being heavily hinged. Whereas a blatant re-gum is treated as a stamp with no gum. If the gum has the same general characteristics and appearance as above, but is present on the perf. tips then it probably is original, but has been redistributed.
Hopefully this has been a useful foray into this fascinating and popular issue. I welcome comments and additional information as always.