Today, I finish off my examination of the 15c Bylot Island stamp from the series, with an exploration of the printings made using PVA gum. Unfortunately I do not have some of the scarcer paper varieties on hand, so my descriptions will be less than complete, and I will have to add examples as they become available.

Unitrade lists four varieties of the untagged stamps, three of which are very scarce, and does not list any plastic flow varieties, even though they clearly do exist on the untagged PVA gum printings, as well as on the dextrine gum printings. I have started to use the term dextrine rather than dextrose after David Gronbeck-Jones, the famous Centennial issue specialist and author pointed out to me that dextrose is the sugar from which the dextrine gum is made. The tagged stamps are listed by Unitrade as existing with both Winnipeg tagging and General Ottawa tagging, on both dull and low fluorescent papers, for a total of 4 basic varieties. All of these exist, of course with plastic flow varieties.

According to Unitrade, the general tagged stamps were the first to appear, in February 1972, followed by the Winnipeg tagged stamps in March. All of the untagged stamps are given as being issued in 1972, but no exact date has been given for their issuance. In the absence of compelling evidence to the contrary, I would assume that they should have been issued at the same time as the tagged stamps on comparable paper.

The remainder of this post will examine the differences in paper, shade, perforation and gum that can be found on these stamps.

Attributes of Paper Other Than Fluorescence

The paper used to print these stamps is always very white, even when viewed against a stark white background like a stock card. However, apart from the paper fluorescence, there are some other differences in the paper used to print these stamps that are not mentioned in any of the catalogues. In my study of the examples I have on hand, I have found the following types of paper: 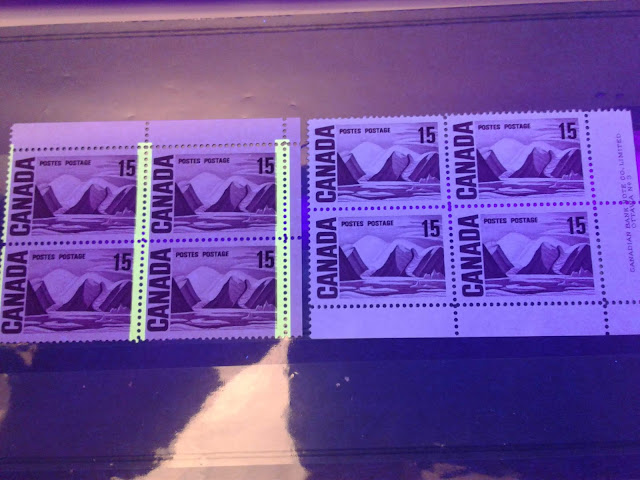 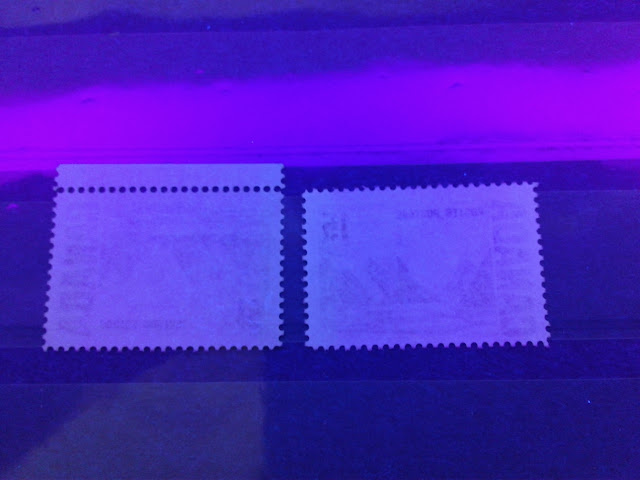 In studying these stamps I have found three variations of the paper that I believe matches what Unitrade considers to be low fluorescent:

The pictures below show these paper types: 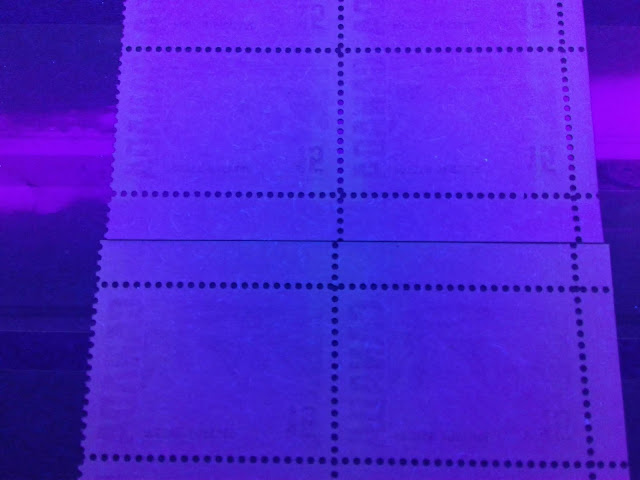 The first type of paper is shown in the top block, while the second type is shown on the lower block. if you compare the top and bottom selvage tabs on each block you can see that the top block is noticeably brighter than the bottom block.

The next picture shows the first and third types of paper: 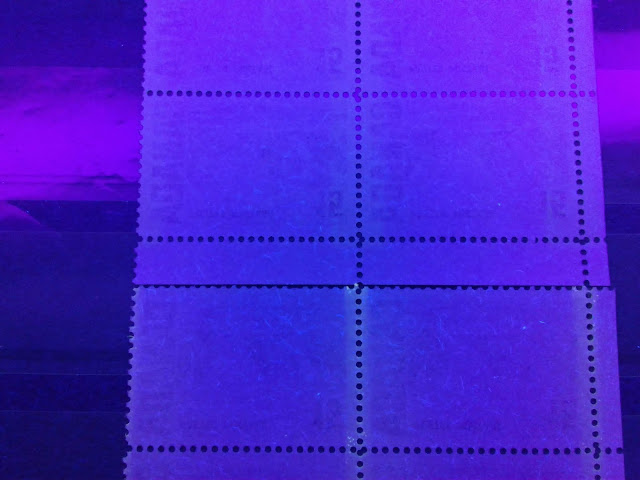 These are of similar brightness, but as you can see there are more fluorescent fibres in the bottom block, compared to the top block.
Fluorescent Papers
The fluorescent papers are very similar, but I have identified three types of paper:

The picture below shows the first two types: 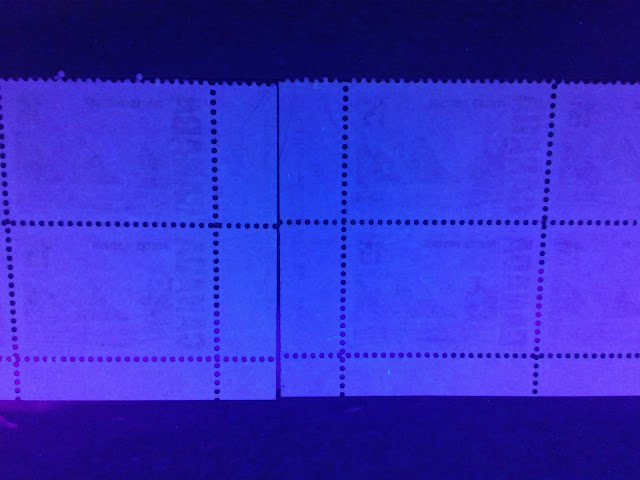 As you can see, the two types look very, similar overall. The only difference really is the colour under UV, with the right block being bluer than the block on the left.
The picture below shows the first and third types: 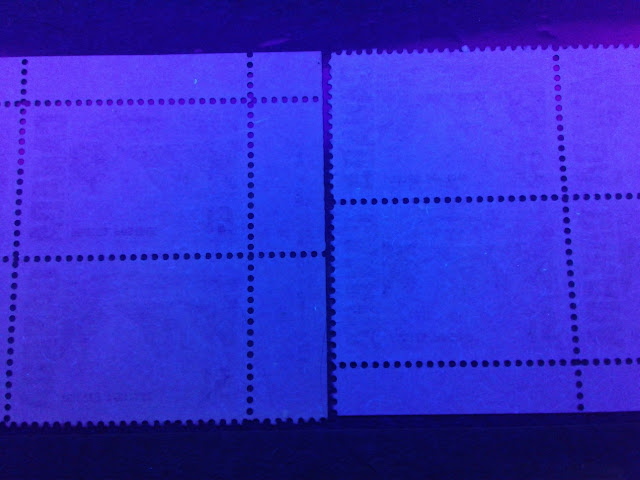 In studying these stamps I have found two shades as shown in the scan below:

The ink used to print this stamp are, on the whole much redder than those used on the stamps with dextrine gum. The stamp on the left is the reddest, and this can be seen most clearly in the shading on the mountains and water. On the Gibbons colour key, the stamp on the left is deep rose lilac, while the one on the right is blackish purple.

Under UV light, the ink used to print the stamps on fluorescent paper looks black, whereas the ink on the other printings still looks deep purple. So the inks used on these printings are both transformative, and non-transformative. 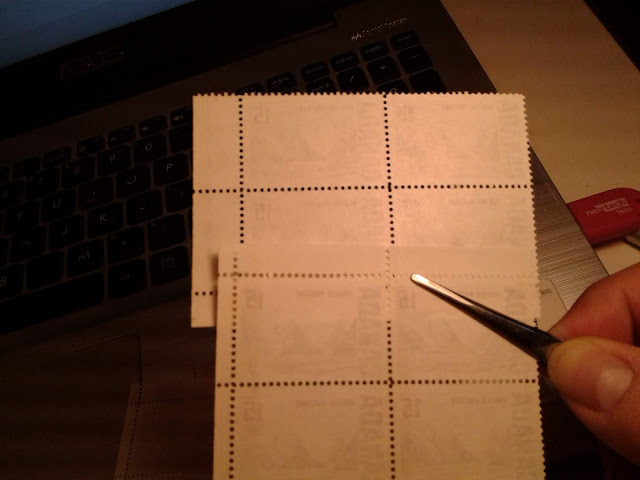 There are two types of PVA gum on these stamps, as shown in the picture above:

Generally, I have found that the plate 3 printings on the fluorescent paper exist only with the first type of gum, while the tagged stamps exist with the second type of gum.

The Winnipeg tagging was applied down the columns between the stamps, and like the other issues, was applied with less space between the columns of tagging bars on the two outer columns, as compared to the inside columns. Like other denominations of the issue, the tagging bars are 8.5 mm wide and were applied in the same manner to the panes in the print layout, so that the top panes received the tagging first, followed by the bottom ones.

As is the case with other Winnipeg tagging, the intensity of the tagging as it appears in normal light does show some variation, which reflects different concentrations of taggant that was applied to the stamps. The tagging varies from moderately strong, which is just visible as light yellow bands, to strong, in which the bands are very clearly visible as yellow bands. 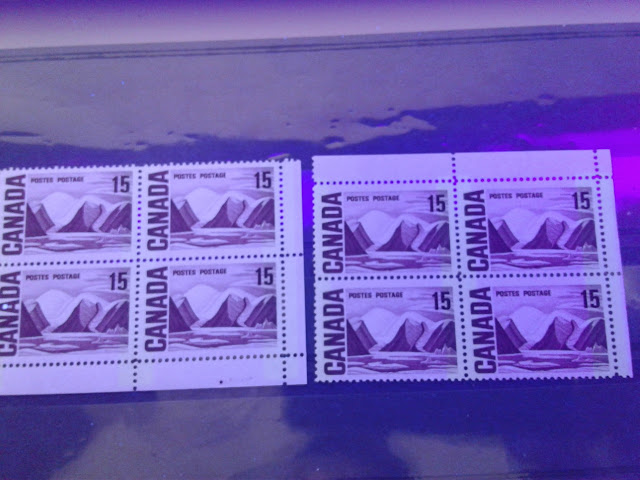 According to Rose, the PVA gum printing exists with W2aL tagging error in which a single wide tagging bar appears at the left side.
General Ottawa Tagging

The general Ottawa tagging consisted of 4 mm wide bands applied down the perforations 23 mm apart. The bands appear very light yellow in normal light, and deep bright greenish yellow under UV light as shown in the picture below: 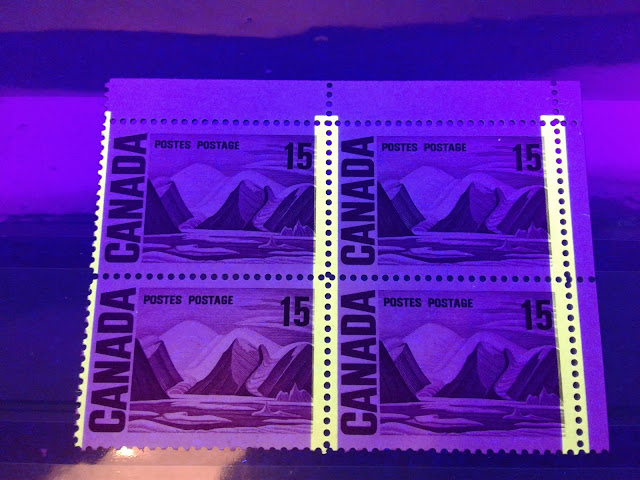 The intensity of the tagging in normal light varies from moderate, which is just visible, as light yellow bands to deep, which is a deep yellow.

Putting it All Together

The untagged stamps were printed from plate 3 only. I have identified 8 paper types, two shades, two gum types, and four perforations. Thus there could be as many as 8 x 2 x 2 x 4 = 128 collectible stamps, 512 plate blocks and 1,536 blank corner blocks. If you factor in the plastic flow varieties, the number of collectible singles and blocks doubles.

For the Winnipeg tagged stamps, I have identified 4 papers, 2 shades, 2 gum types, and four perforations. Thus there could be as many as 4 x 2 x 2 x 4 = 64 collectible stamps and 768 blank corner blocks. The number is the same for the general tagged stamps. As is the case with the untagged stamps, the number of collectible varieties doubles.

This brings me to the end of the 15c value. We now have just four more values to complete the series, so I am getting to the end of a very long and fascinating road. Next week I will explore the printings of the 20c Quebec Ferry.