Today's post begins my examination of the second of the high values of this series: the 10c olive green stamp depicting Tom Thompson's "Jack Pine". It has the second highest number of listed varieties in Unitrade behind the 15c Bylot Island. It is the only stamp of the entire series to have appeared with the experimental "spotty white gum" that appeared at the beginning and middle of 1971.

In dealing with this value, rather than deal with all the untagged stamps first and then the tagged, I am going to split this value by the type of gum. So, today's post will examine the stamps with dextrose gum, then next week, I will look at the stamps with the spotty white gum, and then finally the following week, I will look at the stamps issued with PVA gum, in each case dealing with the tagging types and varieties that exist.

Unitrade's listings for the dextrose gum stamps are fairly simple. They now list three paper types for the untagged stamps and none at all for the Winnipeg Tagged stamps. But, as we shall see, there are far more collectible varieties to this stamp than Unitrade lists, including shade variations, paper fluorescence variations not listed, perforation variations and gum variations.

According to Unitrade, the dextrose gum stamps were first released with the basic set on February 8, 1967, and were in use until the stamps with spotty white gum appeared in December 1971. The Winnipeg tagged stamps were not issued until December 9, 1969.

In addition to the paper fluorescence, there are other differences between the various papers that were used to print these stamps. The main differences are in the direction of the paper weave, as determined by which direction the paper bends most easily, whether or not any mesh pattern or ribbing is visible, the surface porosity of the paper, as seen under magnification, and how the paper appears when viewed against strong back-lighting.

I have noted the following paper types, ignoring the fluorescence:

Unitrade lists three levels of fluorescence for the untagged stamps: 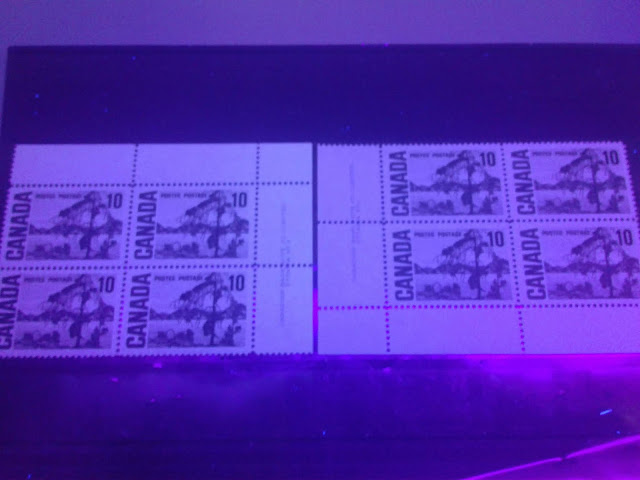 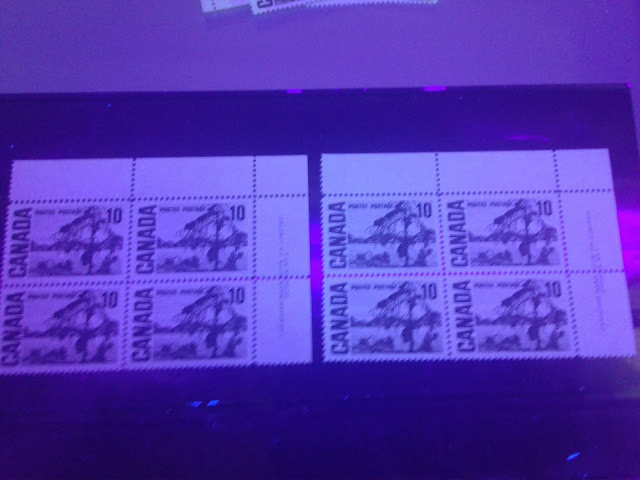 On the left is the same block on dull fluorescent paper that was shown in the picture above. But notice how much darker it appears next to the low fluorescent block on the right.


Non-Fluorescent Papers
I have found two varieties of the non-fluorescent paper. One is a deep violet grey, while the other is more of a pure grey. The difference between the two is shown below: 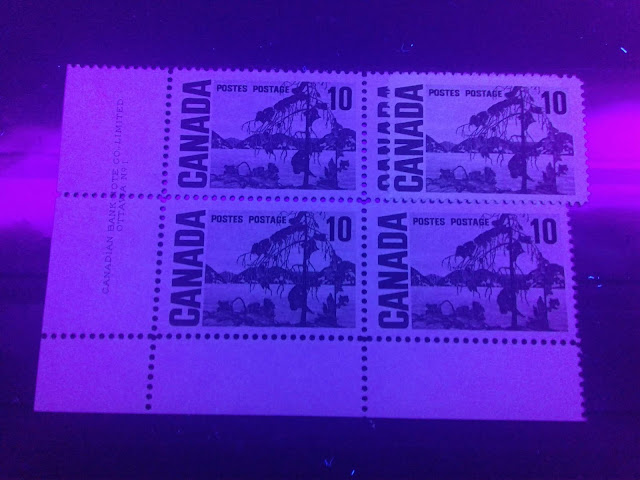 In studying this stamp, I have found five varieties of fluorescence that are definitely brighter than dull and can best be described as low fluorescence. All of these papers are flecked to a degree. Interestingly, three of these occur on the Winnipeg tagged stamps. The pictures below show these papers: 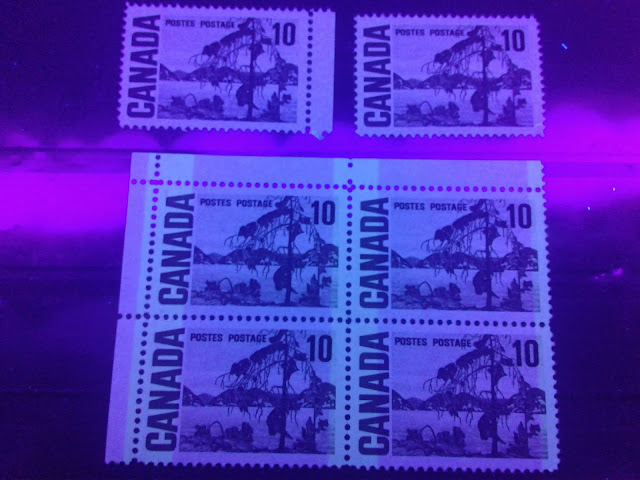 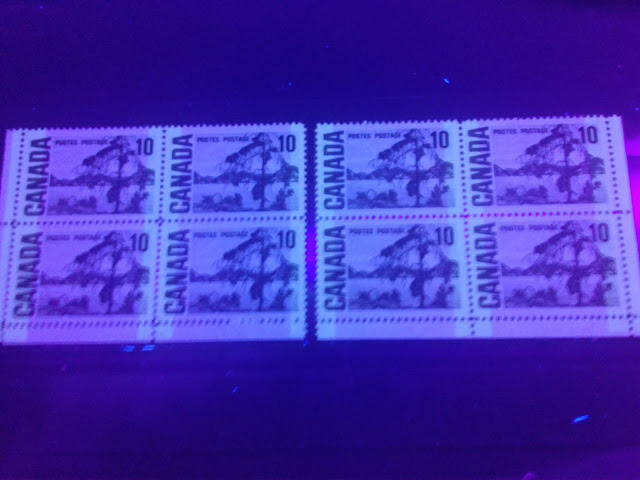 There is a low fluorescent paper that does not appear to contain any fluorescent fibres. The stamp below is an example: 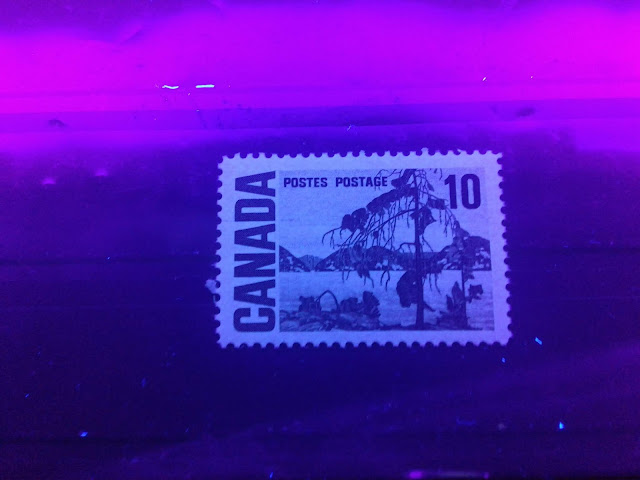 There exists a staggering variety of dull fluorescent papers. The first six of these are all very dull, being close to non-fluorescent. They all contain varying concentrations of fluorescent fibres, which are not high. These may indeed be what Unitrade classifies as NF-fl paper. 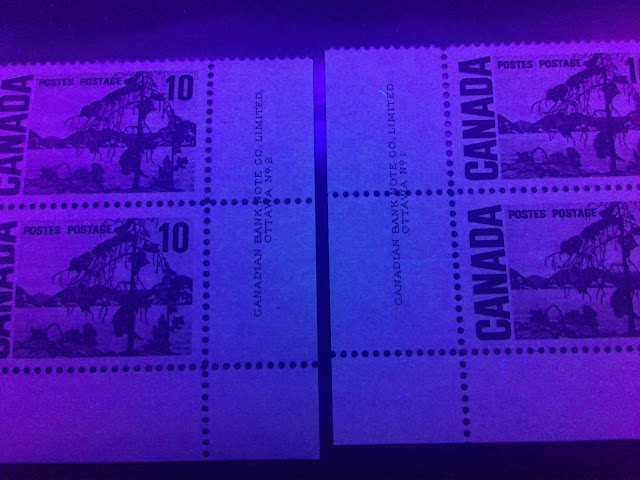 These first two blocks appear a dull fluorescent greyish colour with a yellowish undertone under UV - not quite as dark as they appear in the picture above. The block on the left contains very few medium fluorescent fibres, while the one on the right contains very few low, medium, high fluorescent and hibrite fibres. You can just see the brighter of these if you concentrate in the area of the selvage between the inscription and the word "Canada" of the lower left stamp in the block. 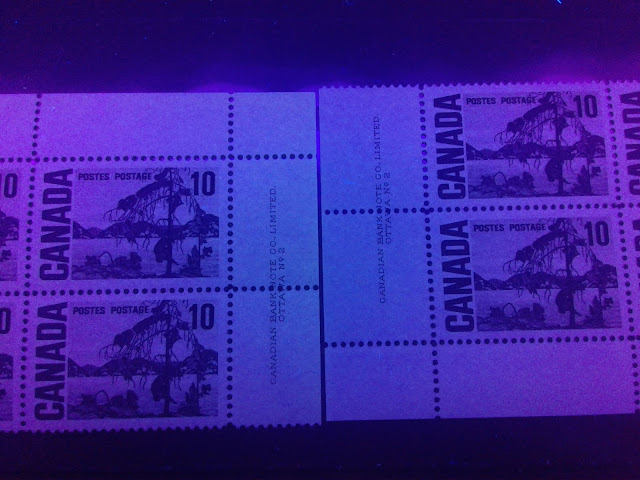 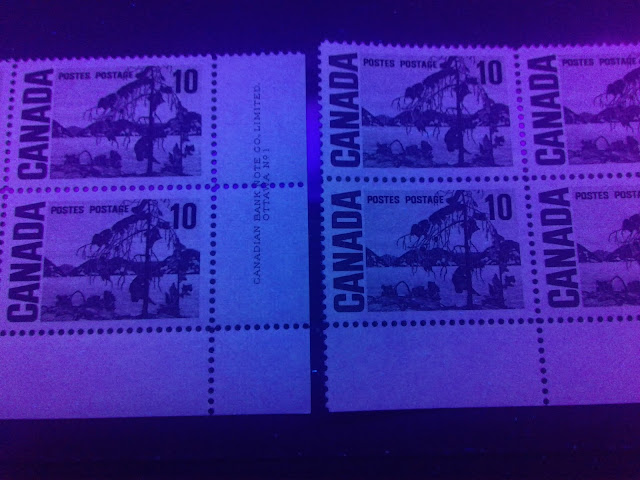 Both of these blocks contain only 1-2 low and medium fluorescent fibres on each stamp. However the block on the left appears a pure grey colour under UV, while the one on the right appears grey with a hint of yellowish undertone. 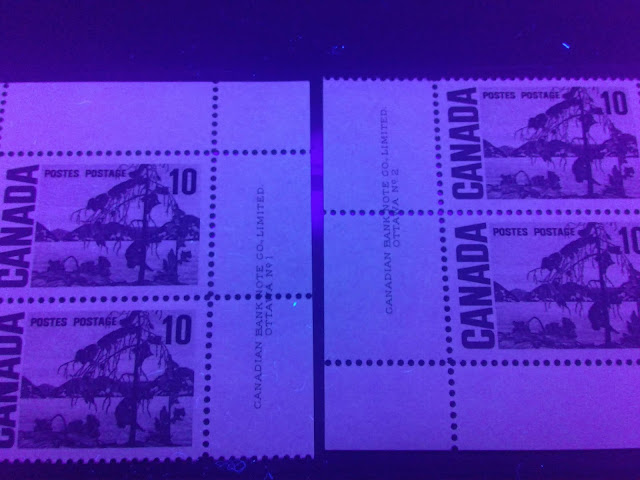 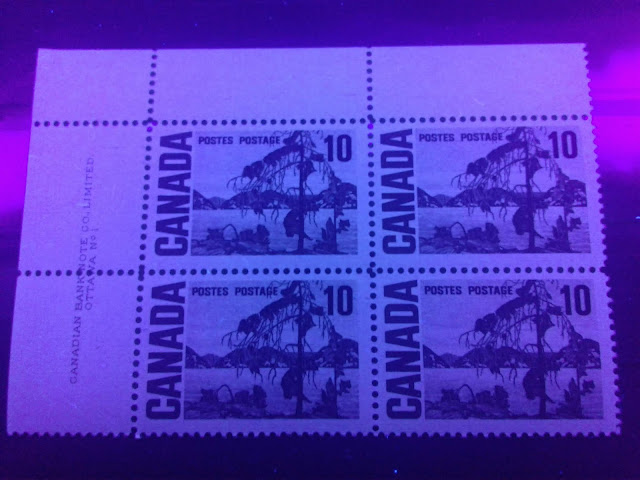 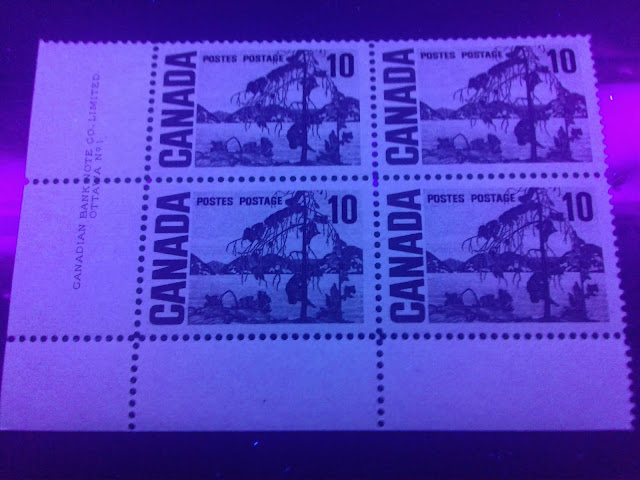 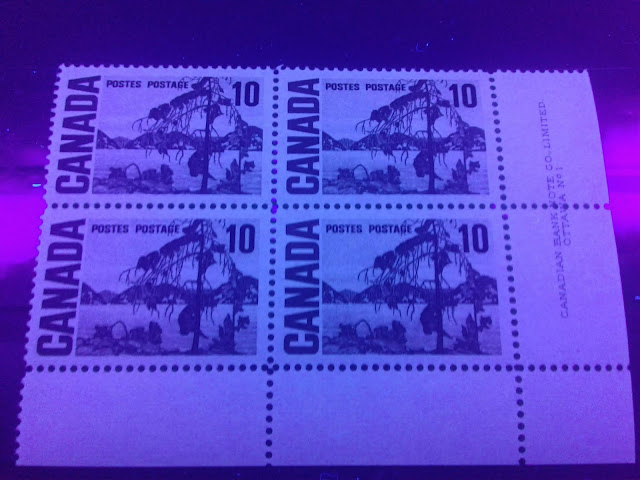 This paper is dull fluorescent bluish white under UV and does not contain any fluorescent fibres. 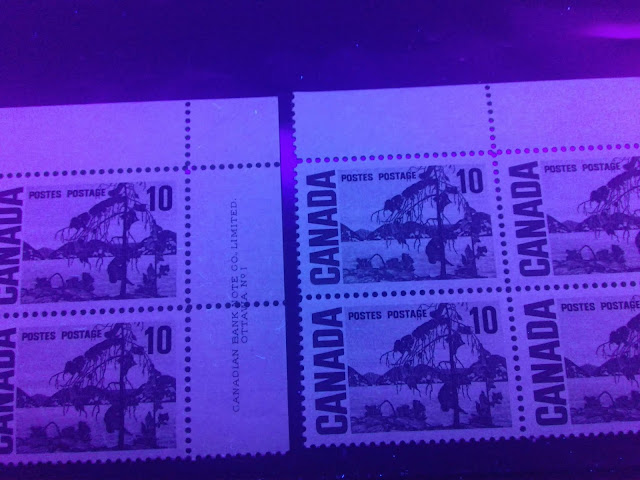 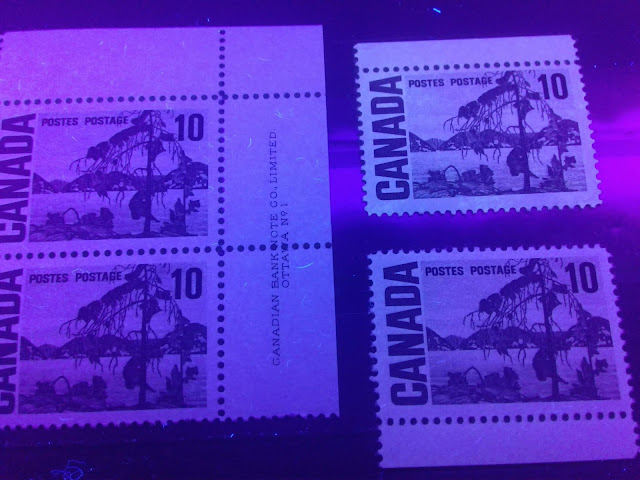 There is a very wide range of shades on this stamp, from brown olives, all the way to deep yellow greens. The colour is generally a blend of green, grey, brown and yellow. so that all the shades will result from variation in the concentrations of these component hues. Generally speaking, the earlier printings with dextrose gum tend to contain more grey and more brown in the green, while the later PVA gum printings tend to contain more yellow, more green and less of both the brown and grey.

Here are two very similar shades of olive green: the pure olive green, as shown on the Gibbons colour key, and the deep olive: 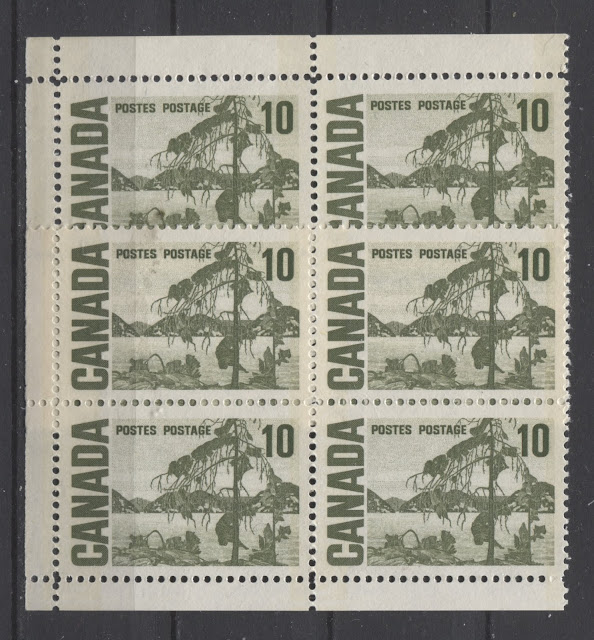 The next scan shows the difference between the pure olive green shade and a slightly less deep version of the deep olive, as shown in the Gibbons colour key: 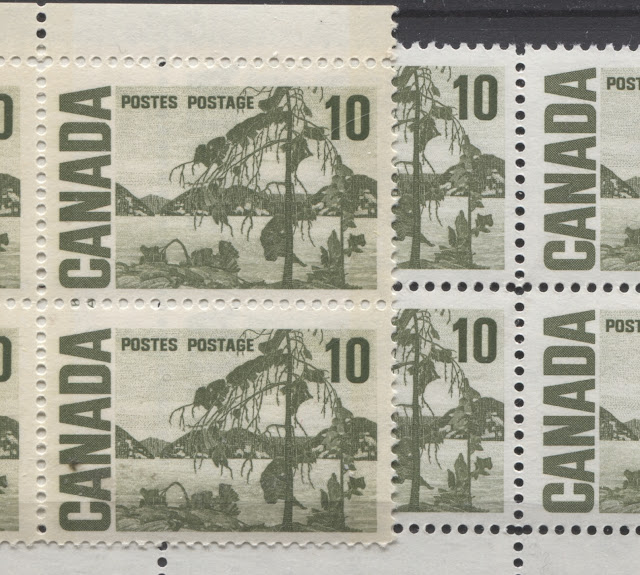 The normal olive green is shown by the block on the left, while the deep olive shade is shown on the right. Notice how the olive green does not appear yellowish at all, but appears to be greener, while the right block appears more olive. This also shows nicely the difference in colour between the cream paper and the whiter paper.

The next shade is the pure grey olive shade, as shown on the Gibbons colour key. I have juxtaposed a block printed in this shade, with the deep olive shade above: 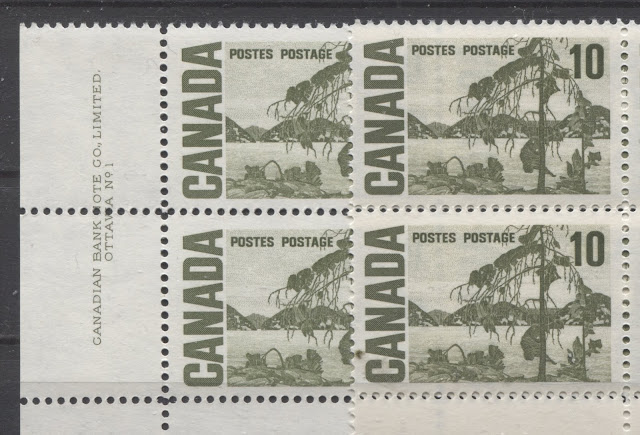 The next shade is a slightly paler version of the grey olive: 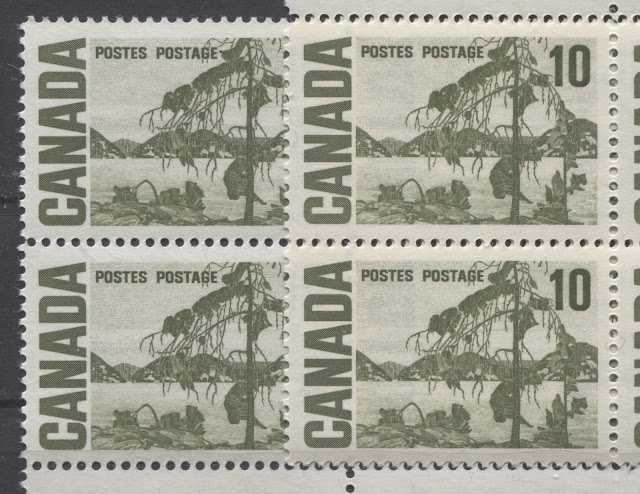 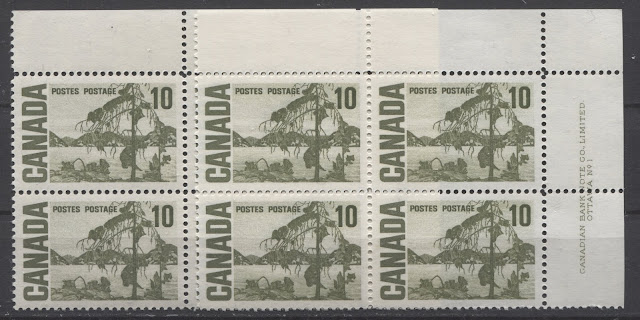 Last, but by no means least, there is the bronze green shade: 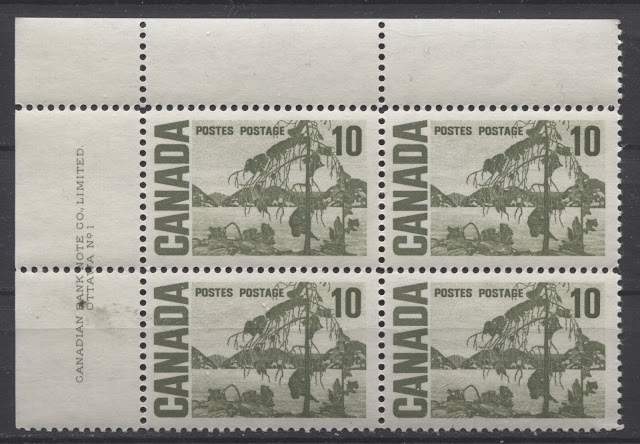 This shade is similar to the deep olive, but is just a touch duller.
The difference between all of these shades can be difficult to see fully in these scans at first, but once you know what to look for and you spend more than a few minutes looking at each scan, your eyes will adjust, and allow you to see the differences more readily. I should point out that this group of seven shades is by no means complete. I know this because many years ago, I studied this stamp looking at dozens of bundles of used singles. In addition to the above, I also found definite brown olive and sage green shades as well, which I do not have examples of here unfortunately. However, this blog is a work in progress and I will be sure to add examples as they become available.
Generally, the differences between the shades can be understood as follows:
It would generally appear that the deep olive and bronze green shades occur on the later printings, while the other shades occur on the earlier printings. All the inks when viewed under UV tend to become black, rather than appearing as shades of deep green.

Unitrade gives the perforation of this stamp as 12, like the others in the series that were printed by the CBN. However, as with the other stamps of this period, there were actually two perforating machines in use that gave slightly different measurements: 11.95 and 11.85. Both were used in combination with the other, so that 4 different line perforation measurements are possible: 11.85, 11.95, 11.85 x 11.95 and 11.95 x 11.85. 11.95 appears to be the most common of these by far.

In my study of these stamps, I have found five different varieties of the dextrose gum:

The pictures below illustrate all five varieties: 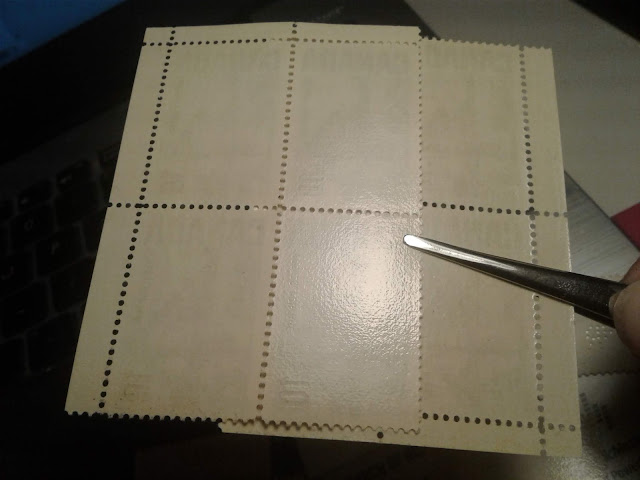 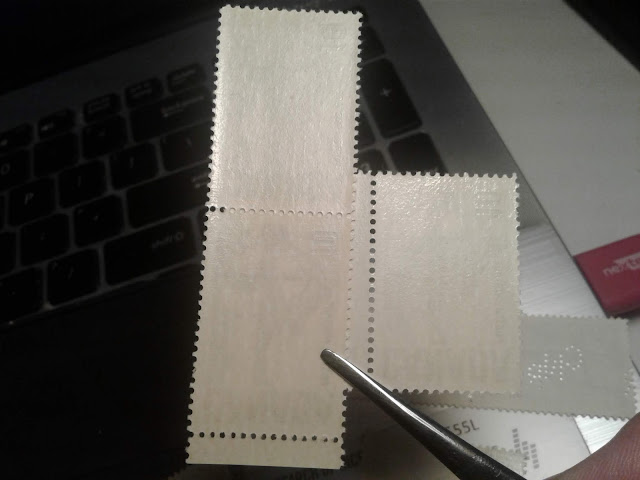 The horizontal pair on the left has the yellowish cream streaky gum, while the vertical pair on the right has the cream coloured semi-gloss gum with the few irregular blemishes. 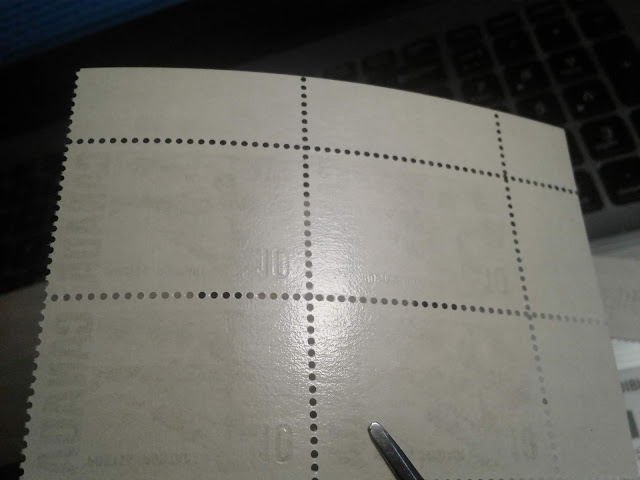 This picture shows the cream gum that has the semi-gloss sheen. Apart from the slight difference in sheen, this gum is a much different colour compared to the high gloss gum, which appears more yellowish.

The dextrose gum stamps are only found with Winnipeg tagging. The gum had been changed to PVA by the time the General Ottawa Tagging was introduced in 1972. The tagging was applied in vertical bars down the perforations between the stamps, just as for all the other values that were tagged with 2 bars per stamp. The tagging bars are 8.5 mm wide, rather than 8 mm, and because of the size of the stamps and the width of the bars, the horizontal spacing between tagging bars across the sheet is different for the outer columns and the inner columns of the sheet. The spacing between the bars in on the left and right sides of the sheet is only 17 mm versus 18.5 mm for all the other columns in the sheet. The picture below shows the difference in these two spacing measurements: 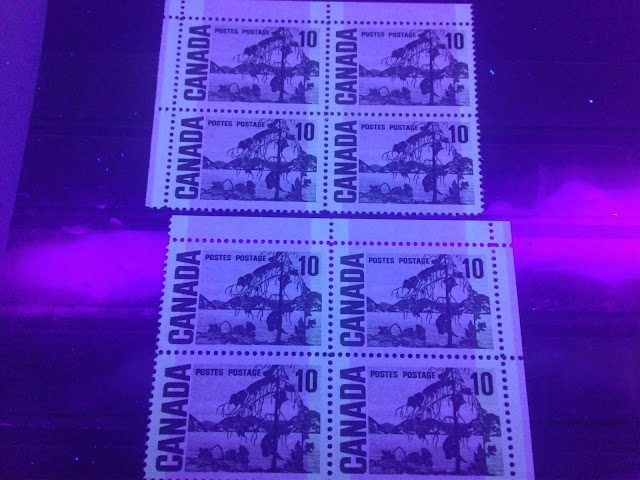 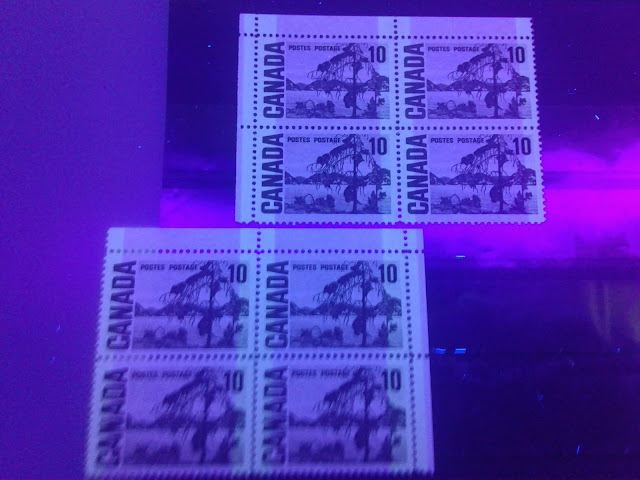 Here is the narrow spacing for the outer columns, which is consistent for both upper blocks, as you can see from the fact that the tagging bars line up. 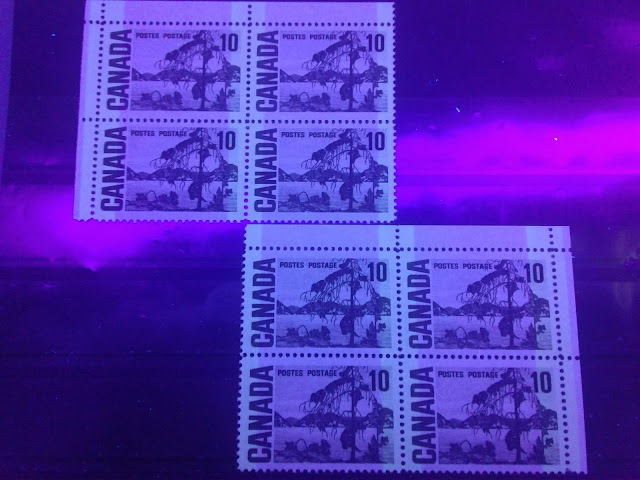 Here are the same blocks showing the alignment of the tagging in the inner columns.

The tagging bars glow a very light yellow to creamy yellow under UV light. They were applied continually down each pane, but there is a gap of about 1 mm between the top and bottom panes in the printing layout of six 50-subject panes. You can generally see this gap on the lower right and lower left blocks that come from the upper panes. The gap will generally appear in the lower selvage tabs of the blocks that come from these panes. The picture below shows an example: 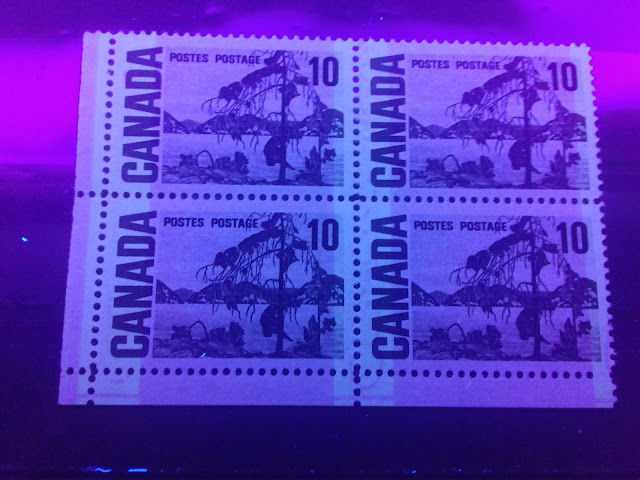 Notice the very narrow gap between where the tagging bar ends and the next one begins.
On the bottom panes, the tagging bars terminate cleanly at the bottom of the stamps and do not extend too far into the selvage, if at all: 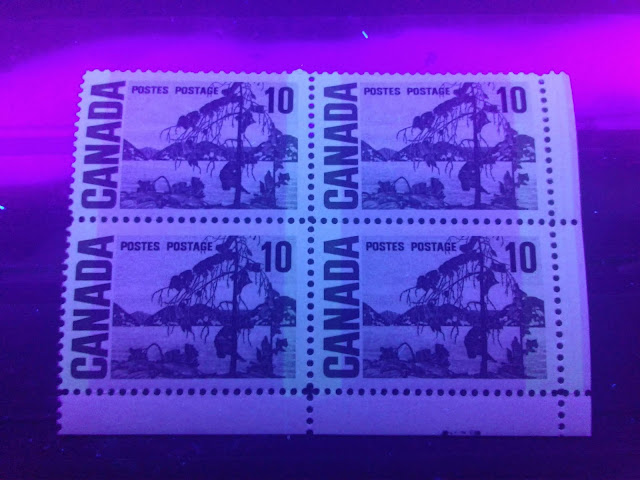 There are no major or minor plate flaws reported to exist on this stamp, which is incredible given the number printed. There are also no reported plastic flow varieties. However, I would not assume that this means these things do not exist. One has to bear in mind that the vast majority of used stamps, many of which reside in large bundleware accumulations have not been studied in this manner. So, there likely are flaws to be found and discovered out there.

Perfins are not an aspect of this issue that I have touched on thus far, largely because I have not had any examples on hand with which to illustrate them. However, they are a separate collecting field unto themselves. A wide variety of organizations and bodies perforated their stamps in order to prevent or discourage employee theft. The scan below shows an example of an inverted CNR (Canadian National Railway) perfin on the Winnipeg tagged printing of this value:

This has the potential to be an enormously complicated stamp because I have identified:

The stamps were printed from 2 plates for the dextrose gum stamps, with a third plate being used to print the PVA gum stamps. It is probable that not every variety will exist in combination with the other varieties. However, without a separate, exhaustive study, it is not possible to know which varieties exist together and which do not. However, if we assume that each level of fluorescence only exists with one paper type, and that all the other varieties exist in combination with one another, then the number of potentially collectible stamps, assuming only 7 shades is:
25 x 7 x 4 x 5 x 3 = 10,500!
Given 2 plates and 4 corners each, this means that there could be as many as 84,000 different collectible plate blocks, and if you look for blank corners, there could be as many as 126,000 of those! These numbers are absolutely staggering. Of course, the number of actual variations is likely to be quite a bit less than this, but it will still be very large.
This takes me to the end of my first post about this value. Next week, I will look at the printings made with the so called spotty white gum, that appeared between 1971 and 1972.