As promised, I am augmenting my posts on the Wilding Issue with a series of additional posts to cover off some of the detail that has become apparent to me while I was listing the plate blocks of this issue. I'm going to start with the shade varieties of the 5c blue as this is the value that I have just been working on, so the shades are all fresh in my mind.

As I have written in previous posts, this value was printed from no fewer than 19 plates, although plate 14 cannot be positively identified because the inscriptions were trimmed off all sheets. This variety of printings has produced no fewer than 22 identifiable shade varieties of blue or ultramarine. Some of these are very subtle, but some are not at all, as shown in the picture below: 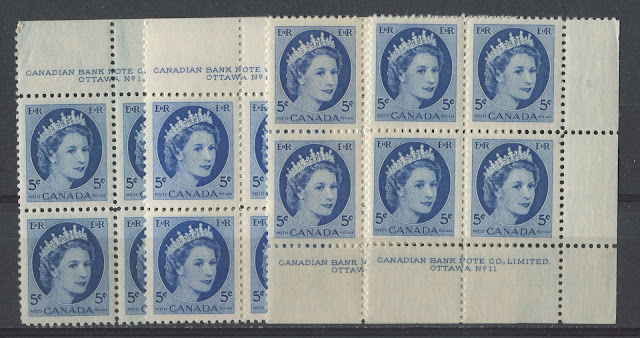 How anyone can think that the two blocks on the left are the same colour is beyond me. These differences are every bit as significant as what we are used to seeing on the popular Admiral series of 1911-1928. There may even be more shades than I have identified, since I have only examined a relatively small number of plate blocks. The shades seem to extend across multiple plate numbers, and trying to tabulate which plates exist with which shades would be a very challenging and worthwhile research project indeed.

The shades that I have found so far, are:

Some of these shades would appear to be relatively uncommon, based on their infrequent occurrence among the blocks that I examined.