This will be my last post on the 1953-67 Karsh Issue. In this post I will talk about the collecting of postal history including first day covers and postal stationery. As we will see this is yet again a field that contains ample scope to keep you busy for quite some time. 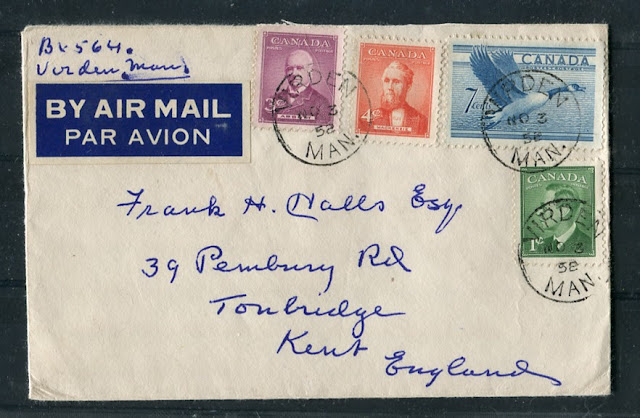 The collecting of covers to various destinations, paying various rates offers many different opportunities for specialization, which are basically as follows:

I'm not an expert on postage rates, but I do know that the airmail rate to the UK and Commonwealth countries and most of Europe was 15c per ounce and that it was 25c to non-Commonwealth countries outside Europe. I am not sure what the surface rates were, but I think that the rate to the UK was the same as the domestic rate which was 4c per ounce. The local city rate for first class mail was 3c per ounce and third class was 2c. I believe that registration was 20c per ounce and special delivery was 10c. So you can organize a collection of covers along the lines of these rates. The more interesting ones will be those where the rates were paid through an unusual combination of lower value stamps, as customary practice was generally to use as few stamps as possible to make up the rate.

Below is a link to the Canadian Postal History Corner website that lists all of the Canadian postage rates for this period:

Quite frequently, you will see mixed frankings of this issue and the earlier or later issues, as the stamps of the definitive issues were often not replaced all at once. For example the current 15c stamp which was originally issued as a commemorative, but continued as a definitive stamp during this period was the 15c Beaver stamp of the Capex Stamp. The current 10c stamp was the Fur Resources stamp which was not replaced by the Inuk and Kayak design until 1955. The 50c oil wells was not replaced until November 2, 1953, a full 6 months after the low values were in use, so it may be found on a number of higher value frankings.

Collecting by destination is a popular way to collect postal history, and there are plenty of destinations that would be rare and unusual for stamps of this issue. US and UK covers will be quite common, as will covers to most western European countries. However covers to:

will all be relatively scarce, and many will have required the payment of the higher postage rates, which can make for some interesting stamp combinations.

First day covers that are not philatelic and were created through simple happenstance are the most sought after by philatelists. The cover shown above is an example. This cover was mailed from Virden, Manitoba on November 3, 1952. That date was the day of issue for both the Prime Ministers stamps and the 7c Canada goose stamp that were used to make up the 15c airmail rate to the UK. There is nothing on this cover to suggest that it is philatelic: no notes, and the placement of the stamps is not careful enough to suggest a philatelic cover. No, this was just mailed on the day that those stamps were issued.

It will be helpful to learn and memorize the dates of issue for the commemorative stamps that were released during the period of this set, as well as the dates of issue for the definitive stamps as well. Quite often you will find that commemoratives were often used in combination with definitives on commercial covers to make up the required rates.

The issue dates for the relevant stamps are;

I don't have exact issue dates for the G overprints, but I assume that they would have been the same dates as the basic unoverprinted stamps.

Collecting by Addressee or Historical Event

This is yet another very interesting way to collect this issue. It is useful to familiarize yourself with the names of prominent politicians and personalities from these years, as well as all the major historical events of the period that a cover could relate to.

Below are two useful links that will take you to pages listing all the world leaders in 1953 and 1954:

Then we have two links taking you to pages listing significant historical events in 1953 and 1954:

You could also consider researching a list of Canadian politicians active during these years as well as prominent entertainers and business leaders and trying to look for mail addressed to them. Google makes it possible now to research names and places easily, so that a seemingly random name on the front of a cover can turn out to be quite significant.

Businesses did not generally do entire frontal and back advertising they way that they did in the 1880's until the early 1900's. However, there are still a variety of interesting and colourful motifs and corner cards on business covers of this period that can be quite interesting to collect, such as the cover shown below: 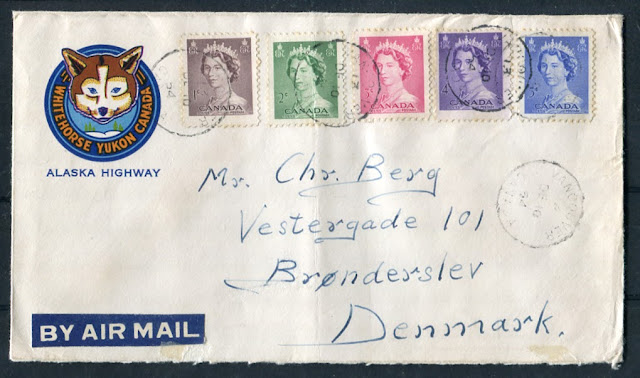 Although used slightly our of period on December 10, 1954, the cover is a nice commercial usage of the entire set to pay the 15c airmail rate to Denmark. 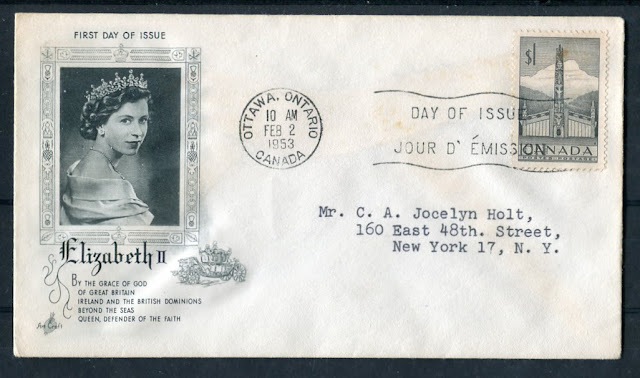 Collecting of first day covers during this period focuses on the different cover designs, also known as cachets. Some Cachet makers, such as Art Craft (shown above) and Rosecraft were very active and their cachets are the most common. However, there were also a number of private cachet makers operating during this period, some of which produced lovely, hand painted cachets. These were often done in very minute quantity and are quite rare now. In addition to the different cachet makers, there are often varieties within the same cachet maker that have gone overlooked over the years, such as the wrong cachet used for a particular cover, or a spelling mistake that was later corrected. These are things to watch carefully for.

First day cover collecting is much less popular than it was at one time, so you can often find accumulations of first day covers for not a lot of money.

There were two series of postal stationery in use during the life of this issue that overlapped into the Wilding period. I include the second series in this post because it employs much the same design as this issue, even though it did not appear until 1961.

Generally speaking mint postal stationery from this period is not expensive and most used stationery can be acquired for very reasonable prices. 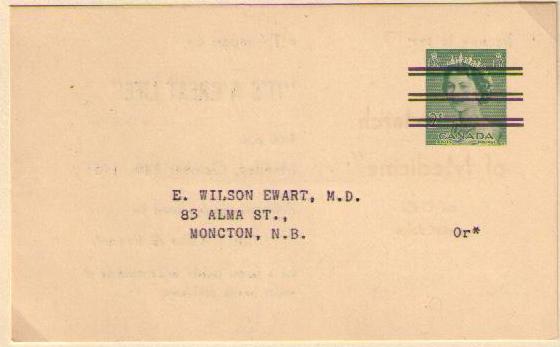 The first series employed the same design as the issued stamps. Envelopes in use that were available to the public were the #8 envelope, which was 165 mm x 99 mm and the #10 envelope, which was 241 mm x 105 mm. Watch for private order envelopes which were of different dimensions to these, as many of these will be quite scarce. The envelopes issued were all on white wove paper and were:

Unitrade notes that gum varieties exist on these envelopes, although it does not state which varieties exist.
Unitrade lists 4c purple and 5c blue special order envelopes but notes that the basic listing is for the most common type. No attempt is made to list every type of envelope that may exist. So this is a ripe field for more detailed study.

Post bands and wrappers exist from this issue was well. Post bands measured 121 mm x 241-279 mm and were sold to the public for mailing bulky printed matter. Wrappers were only available to publishers for sending second class printed matter to the US. They measured 152-203 mm x 336-381 mm. The post bands and wrappers issued in this series include:
There was only one Aerogramme design issued during this period in 1953 and featured an airplane flying over a globe onto which a maple leaf is superimposed.

Several varieties of postcard were issued from this series. Most were on a thin card stock, although the soft, porous "mimeo" stock is found on the 2c postcard. The cards issued were: 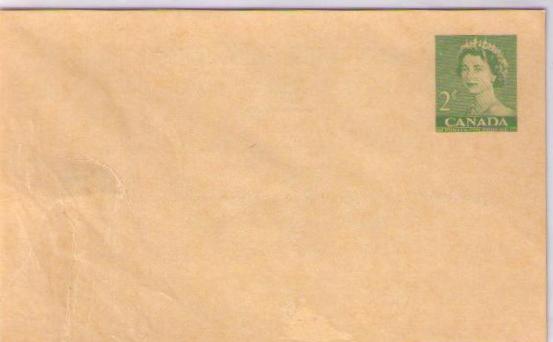 The envelopes issued for this series are all on white wove paper and included:

In addition to these, Unitrade notes that 2c green, 4c purple and 5c blue private order envelopes exist in a variety of sizes. Finally, a #10 5c blue election envelope also exists from this series.

There were no wrappers issued for this series, but there were two post bands:

Postcards issued in this series include:
Generally the postal stationery was issued for the prepayment of local first class, domestic first class, second class and printed matter rates. They were not intended to be used for foreign mail. So one challenging and interesting avenue to pursue in collecting the postal stationery involves collecting pieces that have been uprated by adding additional postage.
That concludes my coverage of the Karsh Issue. There may be a 1-2 delay before my next post, as I am still listing the stamps of this issue and I will not be scanning the stamps of the next issue until I start working on it, which will likely be Friday of next week. This is the Wilding Issue of 1954-1967. It encompasses much more scope than this issue, and I anticipate that I will need at least seven posts to thoroughly cover all aspects of it. I hope you have enjoyed this series of posts and can begin to see this set in a new light after having read them. There really is much more to Canadian philately than most collectors know and much that remains to be studied.