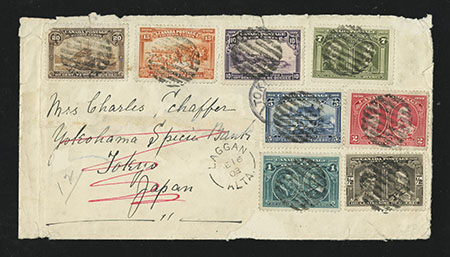 Because of its brief period of use and the scarcity of the basic stamps for values over the 2c, this is one of the more challenging issues to collect on cover. The above cover is an extraordinary example of the entire set used to pay the postage on a cover sent to Japan. As you can see, the condition is tatty, but this cover is of extreme rarity both because it is franked with the complete set, and also because of how exotic the destination is.

There are essentially five angles that one can collect the postal history from:


Today's post will examine these collecting angles in a bit more detail and will illustrate examples of some of the better usages of these stamps that can be found.

The only denominations for which postal history was issued during the reign of Edward VII, during which this set was current was 1c and 2c. These items, whether they were envelopes, postcards, letter cards, post bands or wrappers were all intended for local use only. and the pre-printed stamp impressions were intended to be sufficient to cover the postage. However, occasionally, this stationery would be used for local registered, foreign registered and foreign letters. In these cases it was necessary to add more postage to make up the required rate.

It is not that uncommon to see postal stationery which has been uprated using definitives of the 1903 Edward VII issue. However, it is much less common to see them franked with stamps of this issue. The above cover for example is a local 7c registered cover which has been made from a 2c envelope and the 5c value - a very nice item, worth a few hundred dollars.

This is a rare stamp to find a single usage of, as the printed matter rate had increased to 1c per 4 oz. A single usage of this value is a $350 cover according to Unitrade. More often than not when you see this value on cover, it is in larger multiples. These are not rare and such a cover is generally worth between $25-$50 plus the value of the corresponding stamps.

This value was used for the local postcard rate, printed matter and drop letters. So you most often see it on postcards. It is the most common value on cover next to the 2c and is worth $5-10 usually, depending on condition and whether it is a letter or postcard. postcards are generally worth less than letters. However, as I had said in my posts about the Edward VII Issue, this is the golden age of the postcard and there are loads of possibilities as far as obtaining some very beautiful postcards with this value on them.

This value paid the foreign postcard rate, as well as the local postage rate on letters up to 1 oz. So not surprisingly it is much more commonly found on local covers such as this one: This is an example of a more collectible local cover in that it has a nice stylized corner card in the upper left corner for W.B Mosier. This is another sideline that you can form a collection of local covers around. In addition, these covers can also be collected for the postmarks of smaller towns or post offices that have since closed. For example, the Lion's Head split ring on the cover above, is quite a desirable postmark in and of itself. Postcards franked with this value are not rare, but are not anywhere near as common as local postcards, or postcards franked with the 2c Edward VII definitive.

5c was the UPU rate to Europe, and so this value is most commonly found on cover addressed to European countries such as this one to Paris, France:

These are not common and are worth upwards of $200 in contrast to the much more common covers franked with Edward VII 5c stamps that are generally only worth about $50 each.

This value was used to pay the combined 2c postage + 5c registration fee on local registered covers. Like its 5c cousin above, it is much less commonly found on registered covers, which usually bore either a 2c + 5c King Edward VII definitive, or a 7c Edward VII definitive. Covers bearing this value are worth $200-$300 as well. A nice example of the 7c cover is shown below: 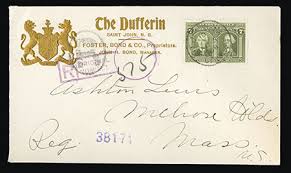 These values would only have been used to pay the 10c special delivery fee, insurance on registered money letters and on bulk payment receipts for delivery of bulk mail. They are very scarce and generally worth upwards of $300-$500 on cover, Unfortunately, I do not have any examples to illustrate here.

Occasionally, one comes across covers that are commercial that have been rated at very high rates for the time, usually because they contained valuable documents that required insurance, such as the cover below:

This cover is an official government cover as indicated by the O.H.M service at the top. This cover was franked with 72.5 cents postage. I do not know exactly what that rate corresponds to, but it has been paid with a complete set of the issue. It is a very beautiful cover.

The day of issue for this set is July 16, 1908. All of the covers illustrated that bear the full set are postmarked after this date, so I don't know if there is such a thing as a first day cover with the entire set, but certainly there should exist first day covers of the 1c, 2c or 5c values, if not the other values as well. This would likely be the most challenging group of covers to assemble.

Generally speaking, unless a local cover was a registered money letter that contained a large sum of money that required insurance, there would be little reason for it to be franked with more than 2c. So almost certainly any local cover that bears the entire set is probably philatelic. Similarly, foreign covers, even registered ones where the stamps are arranged deliberately and neatly are also probably philatelic, like the one below: 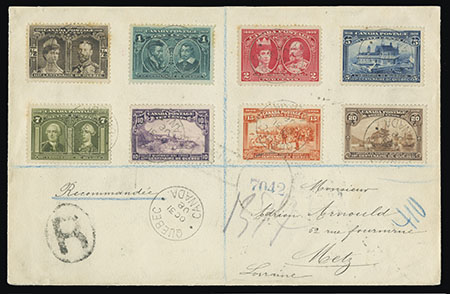 Despite this possibility, these covers are still of the utmost rarity and will cost you hundreds or thousands of dollars at auction, especially if they are first day covers.

That concludes my coverage of the 1908 Quebec Tercentenary Issue. I hope you enjoyed these posts. My next post will provide an overview of the 1911-1928 Admiral issue.