What makes this period so interesting? Two things:
1. Frequent postage rate increases.
2. The proliferation of commemorative se-tenant issues and souvenir sheets, many of which were never intended to be used for postage.
It is important to understand the factors that make a cover scarce and desirable. These factors are the same, no matter what time period we are talking about. There are many, but the main three factors are:
The rate of the cover is the amount of fees that were required to pay for postage and any other services that were purchased in connection with the delivery, such as special delivery, acknowledgement of receipt or registration. Some rates, like local first class are very common and add nothing to the cover in terms of its desirability, while others such as registered special delivery to a foreign destination are scarce and make a cover collectible in its own right.  The route and destination refers to how and where the cover traveled. Prior to membership in the UPU (i.e. before the 1890's) many different routes were followed to deliver mail, each one having a different rate. However by the 1950's the routes were standard, so they do not differentiate covers in terms of scarcity. However, the ultimate destinations are very important. A cover addressed to the US, or Great Britain is nothing to get excited about, as that is where the majority of foreign mail sent from Canada would be going. However, a cover to some exotic locale like Ivory Coast, Greenland or Papua New Guinea would be desirable no matter when it was mailed. Finally the franking refers to the combination of stamps used to make up the rate. Generally speaking, most covers would have been franked with the fewest number of commonly available stamps to pay the required rate. So in other words, definitives would be the usual stamps employed. So in assessing the scarcity of a rate, you look at how common the stamps used to make up the rate are. All other things being equal, the large the number of different stamps used, the better, and the scarcer each stamp is the better the cover is. Another important factor is that the stamps used on the cover be used within the proper period. What does this mean? Well for definitives, the period of use generally ends when the next equivalent stamp is released to replace the present stamp issue. For commemoratives the definition of the period is a bit less definite, since they come out nearly every month, but generally speaking within about 12 months or so is acceptable before they are considered to be late, out-of-period usage.
Lets take a look at four modern covers, all of which are scarce and desirable and apply the above factors to look at precisely why they are so much better than ordinary covers. Then in the rest of the post, I will look at each major period of the modern era and will identify the opportunities that exist in each are to find and collect better covers. 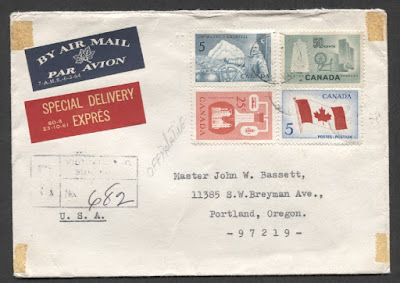 This first cover is a registered special delivery cover sent to Portland Oregon in 1965. So right away, the rate is a scarce rate, since most covers would either have been registered, or special delivery, but not both. The rate for a registered special delivery cover to the US would normally be 35 cents if the indemnity were limited to the basic rate of $50. The destination is to the US, which is common, so there is no real increase to the desirability of this cover on the basis of destination. However, if this cover were addressed instead to another country like Australia, or Fiji, then it would be a much more expensive item. The rate of 85c indicates that 55c represented postage, which is 11 times the normal rate for an ounce. This must have meant that the envelope weighed 11 ounces. A look at the customs label on the back reveals that it contained a complete set of coins to the silver dollar, which would have been about right. So the rate is desirable because of how unusual it is.
Next we look at the actual franking itself. 85c could be paid several ways, but the most common ones at this time would have been:
Those three combinations would have been the common ones for this rate, and would not add much to the scarcity of value of this cover. As we can see there is indeed a 50c textile and 25c chemical industry definitive on this cover. But the remaining 10c has been paid with two of the 1965 commemorative issues. This represents as nice as the franking can get once the first two stamps are taken up by the 50c and 25c. If a pair of one of the commemorative issues was used instead of two separate issues, then the cover would still be good, but it wouldn't have quite as much eye appeal as this one does, and consequently it wouldn't be as scarce. Now lets take a look at the next cover: 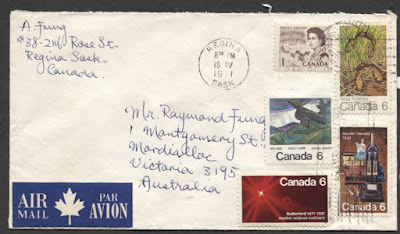 This cover is an airmail cover to Australia that was mailed in April 1971 before the introduction of a standard 15c all-up airmail rate in 1972. Before the introduction of this rate, airmail to non-European destinations was 25c. So this was automatically a less commonly seen rate because the volume of mail to these locations was much lower than to Europe. So the rate makes the cover more desirable. But what really makes the cover amazing is the franking. 25c at this time would have been paid either with:
However, this cover has been paid using no less than four different commemorative issues from 1971 plus a 1c Centennial definitive to make up the rate. Not only are all the commemoratives different, they represent ALL four of the issues that had been released between January 1 and April 18, 1971. In other words, the franking could not possibly be any better for this rate. If instead of four different commemorative issues, there was only 2 different issues in pairs, then this would be a much less spectacular cover.
Now lets look at the third cover:

Here we have an 85c local registered cover. Local registered covers are not rare at all usually. However, on September 1, 1976 the rate for registration and postage went up from 58 cents to 85 cents. It increased again only six months later on March 1, 1977. Thus any cover sent within this short, six month window will be a more desirable cover. This cover was mailed on February 16, 1977, 2 weeks before the end of that period. The 85 cents would normally be paid by:
However, instead of the commonly available 25c Polar Bear definitives that were available at the time, three examples of the 25c Silver Jubilee commemorative for Queen Elizabeth II were used instead. The only way this franking could be improved is if instead of three copies of this stamp, there were one copy and then five 10c commemoratives from this period.
Finally, let us look at the most spectacular cover in the group: 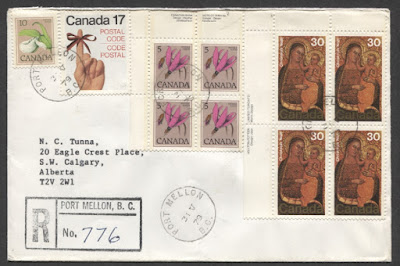