Tobacco stamps are a separate and extensive sub-field within the field of revenue stamps that have been challenging to collectors due to the very large amount of different stamps in existence. To many philatelists, it is this undiscovered, "new frontier" aspect to collecting tobacco stamps that appeals to many philatelists. Another aspect of collecting tobacco stamps is that they are some of the most intricate, beautiful and largest stamps you will ever see. Just look at these beauties: 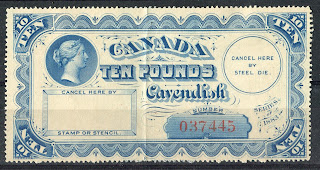 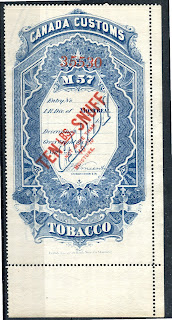 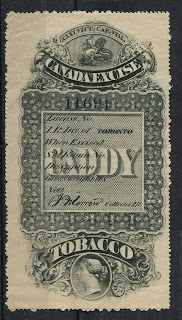 The leading reference work dealing with tobacco stamps is the Catalogue of Federal Tobacco Stamps of Canada by Christopher Ryan. It is currently available as a free download online at the following link:

This very thorough work is 114 pages long and lists all of the federal tobacco stamps that are currently known, including the considerable variations in paper type, printing and perforation that exist. There are no prices unfortunately, however some guidance can be gained by looking at the websites and e-bay listings of prominent dealers of Revenue stamps to see what they are selling their stamps for.

The listings are organized into the following categories:

There are 474 basic RM numbers listed, and sub-varieties under most of these, with as many as 6-8 sub varieties in some cases. So just this first category would be pretty challenging to complete. There are 308 RN numbers with many fewer varieties - most stamps have no listed varieties. A fairly large proportion of the RN numbers are surcharges. There are 1934 RP numbers with many varieties as well, making the large strip stamps, the most extensive category within tobacco stamps. Many of these stamps had the same designs but were inscribed with different city names for the different revenue collecting divisions. The small strip stamps are a much smaller category with only 132 varieties and practically no varieties. So all told manufactured tobacco has a whopping 2,848 basic catalogue numbers. To put that in perspective, there were almost that many catalogue numbers for all the Canadian postage stamps issued since 1851.

Moving over to the other tobacco stamps, Reworked Tobacco has 84 RW numbers. Cigars have 747 RG numbers, making it a fairly challenging topic to embark on. Cigarettes have 817 basic numbers with many varieties listed for the 19th century issues, but not so many for the 20th century stamps. Snuff stamps have 122 RS numbers, while Fine Cut Chewing Tobacco has a mere 23 basic numbers. Twist has 231 basic numbers with few varieties, while Canada Raw Leaf has 57 and Imported raw Leaf has 14. The last category to have numbers are the Bond Removal Permits with 30 basic numbers.

It quickly becomes apparent to a new collector of tobacco stamps that there are a few aspects to collecting these types of stamps that are very different from what most philatelists who concentrate on postage stamps are used to:

1. Few to No "Covers"
2. No Gum on mint stamps, no no concept of MNH
3. High tolerance for damaged stamps
4. No currency denominations

Tobacco stamps were primarily affixed to actual packages and boxes of loose tobacco, cigarettes, snuff and cigars. Most were affixed in such a way to act as a seal to evidence that the package was not tampered with. Some stamps even carried warnings that the stamps were to be destroyed once the product was removed. Consequently the concept of "on cover usage" doesn't really exist for these stamps in the same way as postage stamps. In theory is is possible to collect cigar boxes that have survived the dump as the equivalent of "covers', and to a lesser extent flattened cigarette packs. However, this has not been a popular practice due to the impracticality of storage and also because very few boxes have survived. Also a box with the label affixed does not tell a story in the way that a cover, with its route markings and addressee information does.

Virtually all tobacco stamps were produced without gum and were affixed using glue. There are two implications to this. The first is that there is no concept of mint never hinged stamps to worry about. The second is that it has been very difficult in many cases to remove the stamps from packages without damaging them in some way, because many of the glues used to affix the stamps were not water soluble.

Because of the above, very few to no used tobacco stamps exist without significant creases, tears, thins, missing pieces, varnishing and scuffs. So collectors of these stamps do not worry too much about faults. Many of the tobacco stamps were heavily remaindered so that mint examples are often more common than used, making even damaged used stamps quite desirable. So don't throw away any tobacco stamps you come across that are used, even if they look bad by postage stamp standards. They could be quite scarce. Most won't be, but some could be and you shouldn't assume that they are worthless. Even mint examples of many of the larger stamps in the pound category will have creases and short perforations, simply due to their size.  It actually really puts postage stamp grading into perspective I think, as we tend to grade stamps with even the smallest problems so harshly.

Finally, when you look at tobacco stamps you will notice that the values or denominations are weights of tobacco rather than dollars and cents. However, the concept of scarcity should be the same for  the lower weights and higher weights as for low values and high values on stamps. Low weights would have been used consumer packages and would be far more common than the the 5lb, 10lb and Caddy (25lb) labels, which are quite scarce. In addition, you will see that the various serials followed a pattern where one colour, often red was used for Warehouses and another colour, often black was used for the tax paid by the end consumer. Again, one would expect the black consumer stamps to be more common than the warehouse stamps. Finally, many of the stamps were inscribed with the city names of the different revenue collecting divisions, such as Toronto, Hamilton, Windsor. All other things being equal, Windsor should be scarcer than Toronto.

So What Are They Worth?

It is hard to generalize, but my feeling on values would be as follows:

1. Low weight stamps, i.e those under 1lb would be worth between $2-$5 depending on what they are.

These are very rough generalizations based on what I have seen Van Dam and Eric Jackson Revenues pricing their stamps at. I'd appreciate any input you can provide on this subject though.