One alternative to the regular Canadian stamps for a collector looking for a new challenge is to consider the field of Canadian Revenues.
What are revenue stamps? They are any stamp issued by a government or municipal authority to evidence the payment of some fee. Because of this, the field is very open ended. Erling Van Dam is the leading dealer in Canada for revenue material and he and his late wife have done an excellent job of putting together a catalogue listing most of Canada's revenue stamps. But as comprehensive as it is, it is by no means complete. One of the reasons is there is just so much material and there are no records kept in many cases of what was printed and issued, so it is impossible to give a complete list of everything that exists. This stands in sharp contrast to postage stamps, where meticulous records were kept of what was issued and most of our study is in delving into the details of papers, inks, cancels and so forth. With revenue collecting, part of the task is simply establishing what exists, and for most of the issues, this can only be done through acquisition and observation.
Some of Canada's revenue stamps that am working on now are shown below: 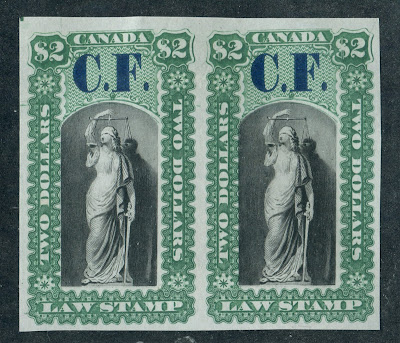 This issue is the Law Stamps issued by the province of Ontario in 1864. Law stamps were affixed to any legal document and were to evidence the payment of filing fees. So a mortgage, a conditional sales contract, a land conveyance - these would all have law stamps. These stamps were printed by the American Bank Note Company, not the British American Bank Note Company. The basic designs were overprinted C.F for "Consolidated Fund" and F.F. for"Fee Fund". There were many types of papers used and many different perforations, none of which have, to my knowledge been studied in detail. In addition, many plate proofs of these issues like the pair shown above, exist in both the issued colours and various trial colours, both with and without overprints. Finally, I have noticed that the overprints themselves vary, with some having broken letters and others having mixed stops where one stop (period) is higher than the other. Again, I am not aware of any detailed study ever having been published on these issues. These issues were in use for a good six years until 1870, so there would have been a lot of printings. 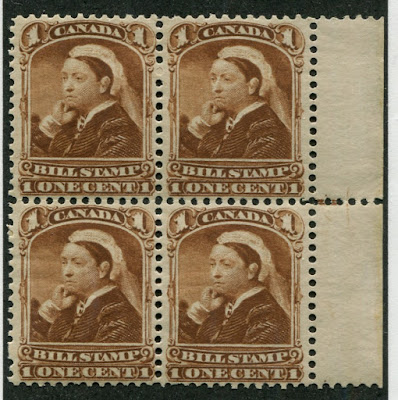 This is the federal Bill Issue for 1868. Bill stamps were attached to negotiable instruments like promissory notes, cheques and bank drafts. All cheques until fairly recently (sometime in the 1950's) used to have an excise tax payable for processing them. The above 1c stamps would have been affixed to every single cheque cashed by the banks at that time. Thus, while not rare in used condition, pristine blocks like the one shown above are not common.
These stamps were printed by the British American Bank Note Company, which was the same firm that printed the Large Queens and Small Queen Issues. The implication of this is that these stamps will be found with the same range of paper and gum types as their postage stamp counterparts. This makes them a very useful reference source in studying the postage stamps of the period, due to the fact that they much less expensive than the stamps. These had almost the same period of use as the Small Queens and so there were a very, very large number of printings. Shade, perforation and paper varieties abound and again, I am not aware of any detailed study having been done to identify all of these.
The $2 value of this set exists with an inverted centre, which is a very rare item and lists in Van Dam for $12,500 in used condition. However most of the stamps from this set are quite inexpensive, listing for between 40 cents and $10. So you could have a great deal of fun with this set. 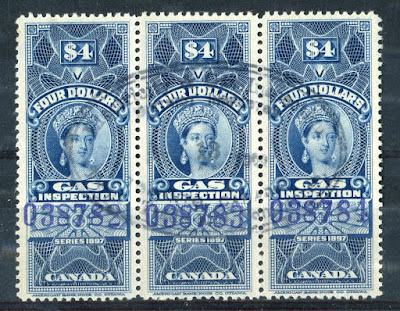 Next we have gas inspection stamps. All gas connections had to be inspected for safety compliance and the payment of the inspection fee would be evidenced by attaching gas inspection stamps to the inspection document. The above strip is used and is from the 1897 series, which was in use until 1930.
On these issues, there is still some variation in papers and quite a lot of shades, but not so many perforation varieties. There are two major rarities from this series: the 5c blue and the 60c rouletted, both of which list for $4,000 in used condition. But again, everything else in the series is very affordable and it is possible to collect full sheets or large inscription blocks, which look very lovely on an album page.

Finally, we have the Electric Light Inspection stamps, which came into use in 1900, and were used until the early thirties. Like their predecessor, there are lots of shades to collect and because they were used until 1930 and were printed by the American Bank Note Company, which also printed the Admiral issue, they exist in both wet and dry printings like the Admiral postage stamps. Once again, these nuances are not mentioned in Van Dam and are just waiting to be studied by the keen philatelist.
There are many more categories of revenues than what I show here, but most of them come into play after Queen Victoria's reign. All the above stamps that I have shown are federal issues, but each of the provinces had their own revenue stamps as well for things they had jurisdiction over.

Most revenue collectors that I know are generalists, trying to obtain one of every revenue stamp listed by Van Dam, without getting into the different varieties that exist. However, there are a number of advantages to be gained by choosing an issue and specializing, the main one being the possibility and thrill of new finds. The possibility is very high in this field, and it is one that provided you stick to a topic over the long term, you are bound to make money on when you sell. The reason is that revenue stamps are much less expensive for what you are buying than postage stamps are.

Another advantage to collecting them in parallel with your favourite postage issue is that you can use what you learn from your study of the revenues to help in authenticating some of  your postage stamps. For instance, if you collect Small or Large Queens and you also collect the 1868 Federal Bill stamps, you can learn for very little money what all the Duckworth papers and gum types are supposed to look like and then you can apply that knowledge to the your study of the Small Queens. For example, take the 1c block above. This is what the gum side looks like: 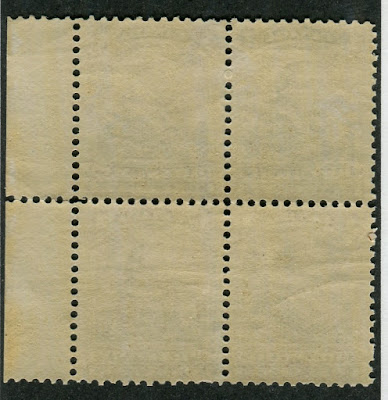 That gum is dull and streaky. If you read about the gum on the Small Queens you will quickly learn that for the mid-Montreal period between say 1874 and 1880, the gum tended to have this appearance. It most commonly associated with the Montreal printings perforated 11.5 x 12. So strong is this association, that when I saw this block, I was 99% certain that it would be perf. 11.5 x 12 when I measured it. Sure enough, it is indeed perf. 11.5 x 12. So I know from this, that this block is from between 1874 and about 1880. Now whenever I see a mint perf. 11.5 x 12 Small Queen, I can compare the gum to this to see if it looks original, which is very useful.

One disadvantage to revenues is that for many sets the stamps are all the same basic colour, with just varieties of shades, which if you like a lot of colour, limits what you can collect. Although even the monocoloured issues do often exist with trial colour proofs that you can collect as well. Another disadvantage is that large accumulations of revenues are hard to find and consequently, if you want to specialize you will find yourself having to be more patient in acquiring material. You will probably buy most of your stamps at retail as opposed to auction because most revenue stamps are not valuable enough for auctions to offer them separately. Finally, in terms of condition, it is much harder to find pristine condition. The main reason for this is that they were used on documents that often got folded through the stamps, or stapled of punched. In short, they were handled with much less care than postage stamps. However, pristine stamps do exist, for those with the patience to seek them out.

If you are looking to specialize as opposed to forming a general collection and you like beautiful classic engraved stamps then your best bet is to choose a series that has a long period of use and for the category of revenue is one that would have seen a lot of use. My top picks for these sets are:

Which one of these is best for you will depend on your budget, whether having lots of colour is important to you, and whether you like to collect primarily shade varieties, paper varieties, gum varieties or perforation varieties.

If you can spend $500-600 on your most expensive stamp and you like lots of varieties, but you don't need to have a lot of different coloured stamps, then without question, I would say the 1870-1911 Ontario Law stamps are your best bet. They span a 41 year period, there are tons of perfs and papers, and finally the shades on the stamps go from yellow to orange, to red, to brown red and beyond. If you can spend over $10,000 on you most expensive item then I would recommend the Third Bill Issue. I can still recommend that to a collector of even modest means as long as they don't mind not obtaining the rare inverted centre on the $2. If having different coloured stamps is important, but you still like lots of varieties, then the Quebec Registration stamps are your best bet.

If on the other hand you really don't want to fuss around with perforations and paper varieties and want to focus instead on colours, then either the 1929-1940 Ontario Law, or the Saskatchewan Law stamps are best, as there is only one perf and most of the variation is in the shades.